(US~Observer) Seattle, WA – In an effort to establish a “progressive income tax,” a measure was passed by the Seattle City Council on July 10th. It created a 2.25 percent tax on gross income over $250,000 per individual or $500,000 for married couples filing jointly. The tax is scheduled to be implemented on January 1, 2018.
Then Seattle Mayor Ed Murray made a statement saying Seattle is “challenging this state’s antiquated and unsustainable tax structure by passing a progressive income tax.” He further called it a “new formula for fairness.”
Opponents, however, are saying it is anything but “fair.” Several organizations, such as The Freedom Foundation, a non-profit think and action tank with offices in Washington and Oregon, are seeking to challenge the tax in court.
In fact, Jason Mercier, director of the Center for Government Reform at the Washington Policy Center said there are three key legal arguments to challenge the tax: “The state constitution says taxes must be uniform within a class of property; a 1984 state law bars cities from taxing net income; and cities must have state authority to enact taxes.”
On another front, Susan Hutchison, the Washington State Republican Party Chair, is even calling for Seattle residents to “forcefully resist the tax” and simply not pay it. 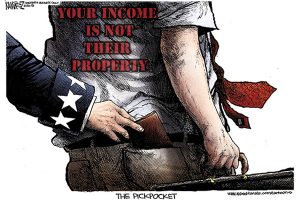 But the story isn’t this tax or those that are challenging its legality, it is how Seattle intends on defending the tax in court that makes this so dangerous. It is a potentially harmful precedent that could affect everyone in Washington and beyond.
According to a Seattle Times article:

“Seattle may assert that taxing total income is different from taxing net income, while also seeking a ruling that income isn’t property.”

Let that sink in for a moment; “…while also seeking a ruling that income isn’t property.”
In essence, Seattle’s method for fighting for its right to tax it’s wealthy citizens will result in paving the way for eliminating every citizen’s right to their income, because it is “not their property.”
It is a dangerous precedent that, if established, could usher in a new level of “taxation” through the government confiscation of income. Because we all know, you wouldn’t be making any money without the government (wink), so they think everything you make isn’t your property and is theirs.
Why would the public believe that government, who views our income this way, would keep their hands out of our pockets just because we aren’t “rich”?
Good job, Seattle, your representatives just raped all of you in the name of helping the disenfranchised, and you don’t even know it… yet.
UPDATE: Since our initial reporting, Seattle Mayor Ed Murray has resigned amid multiple child sex abuse allegations.