In the 3½ years leading up to the August 2018 trial of Rodney Franck, Clark County Deputy Prosecutor Kasey Vu has worked to cover up a botched investigation and to suppress evidence. Vu intends to control the outcome of the trial by convicting an innocent man of murder.

Vancouver, WA – On April 23, 2015 a brutal assault in downtown Vancouver left 54-year-old Christopher Brewster fighting for his life. Mr. Brewster remained hospitalized in a coma until June 7, 2016 when he died from his injuries.

On January 26, 2016 – 9 months after the attack – Vancouver Police Department (VPD) Detective Neil Martin conducted an interview at the request of 19-year old Vancouver resident, Spencer Austin Pell, who had come forward to turn himself in. During the recorded meeting, Pell confessed to be the lone assailant in the assault on Brewster.

Per VPD incident report, Pell met voluntarily with Detective Martin at Vancouver’s West Precinct. Transcripts of the meeting document a 14-minute recorded confession in which Pell admitted to hitting Brewster before “blacking out”. He stated on record, “That was me that hurt that man. I was, uh, pretty intoxicated and, uh, words were being exchanged and he hit me and so I snapped, and I didn’t intend for it to go down like that.” Pell told police he came forward to set the record straight. He said he didn’t want someone else taking the blame for what he did.

Shortly after the assault, police detained Pell and Franck. Following an hour-long interrogation near the crime scene, police took photos of Pell’s hands, face and clothing then released him to walk home. Limited follow-up was done regarding Pell although he matched eye-witness descriptions. Photos of Pell’s right hand revealed signs of traumatic injury.

On January 5, 2016, three weeks prior to Pell’s confession, Detective Martin arrested 22-year-old Rodney Taylor Franck of Vancouver, WA, the individual Martin targeted for the assault. Significant effort was put forth to build a circumstantial case against Franck, who intervened to stop Pell’s attack on Brewster. Following the arrest, his attorney advised him not to give a statement. Franck agreed to remain silent because he believed Pell would come forward to tell the truth and Pell previously bragged to others about “beating up an old man” on April 23rd.

In the weeks following Franck’s arrest, Pell confided in others about feelings of guilt that his “brother” was in jail for the crime he committed. According to witness statements, friends and family urged Pell to turn himself in to police. Spencer Pell’s step-father and a close family friend accompanied him to the West Precinct when he confessed to the crime.

During the assault, 911 dispatch received 2 separate phone calls from neighbors who heard shouting and reported seeing shadowy figures of two men and a third man on the ground through their windows. According to patrol officers who arrived at the scene and spoke briefly to the callers, the witness statements were too vague to warrant an immediate response by Major Crimes Unit (MCU) detectives. The decision to delay an MCU investigation was made by Sgt. Jeff Kipp during a midnight phone call from Eric McCaleb, the VPD officer in charge at the scene.

According to dispatch reports, processing the crime scene, interrogating two suspects, and questioning witnesses was handled by a mix of 12 VPD patrol officers who responded from various locations across the city.

The neighbors who called 911 were not contacted for detailed witness statements until 15 months later. During their interviews, each eyewitness stated their memory of the night was unclear. Both requested that investigators refer to the original 911 calls. Unfortunately, detectives failed to preserve the 911 recordings, a critical step in gathering evidence for all criminal investigations.

Highly respected Vancouver Attorney, Bob Yoseph, came out of retirement in June of 2016 to represent Rodney Franck after charges were escalated to Murder II following the death of Brewster. Yoseph is one of few attorneys in the Vancouver area qualified to represent homicide defendants.

Yoseph made startling discoveries as he dug into Franck’s case. 2 days after Brewster’s death, co-defendant Spencer Pell was offered a cooperation agreement by Prosecutor Kasey Vu. Pell could avoid murder charges by turning State’s witness against Franck. The shocking hypocrisy of the plea deal was that Pell previously came forward on his own volition and confessed that he was the one responsible for the attack on Brewster.

As the defense team analyzed the 14-month-old case, additional problems with the investigation surfaced. Among them:

On May 25, 2017, Yoseph submitted a “DEFENSE MOTION TO DISMISS THIS CASE FOR GOVERNMENTAL MISCONDUCT”. The motion reads in part:

“Mr. Franck is charged with Murder in the second degree on alternate inconsistent theories that he is either a principal or an accomplice to the co-defendant snitch, Spencer Pell. There is the possibility that he could spend the rest of his natural life in prison. In contrast, Mr. Pell, the individual that has admitted the stranger on stranger assault at least once to the police, as a result of a cooperation agreement with the state, is only charged with Assault in the first degree with a recommended sentence of 90 months in prison conditioned upon him testifying truthfully at the trial of Mr. Franck. As a result of this agreement, he has changed his original story to the police (I don’t know what you are talking about) to his second story to the police (I am the guy you are looking for) to his third story to the police (I watched Rodney beat the guy to death with his fists). These three stories took almost a year to develop as the environment and the landscape of this case changed. Along the way,
Snitch Pell made statements to at least 10 other witnesses that he was the person that assaulted Mr. Brewster (the deceased), and that Rodney stopped him from further assaulting the victim and tried to help the victim after the assault stopped.”

On May 31st, 2017, within one week of Yoseph’s scathing criticism of governmental misconduct, Prosecutor Vu brought Spencer Pell before Superior Court Judge Derek Vanderwood to sign a plea deal that replaced the cooperation agreement. The new plea bargain reduced Pell’s charge from Assault in the first degree to ATTEMPTED Assault and made null and void the prior agreement that required Pell to testify (truthfully) at the trial of Rodney Franck.

The Columbian Newspaper published a story the following morning, essentially exonerating Pell from wrong-doing and inferring murderous responsibility on Rodney Franck to their readers. Yoseph emailed the news story with the following message to his client who was out on bail pending trial:

State Doubles Down to Deceive Jurors

Amid accusations of governmental misconduct, Prosecutor Vu has focused his energy to ensure that exculpatory evidence does not reach a jury. Vu motioned the court to suppress Pell’s medical records and photos that show he fractured the 5th metatarsal in his right hand. Also known as a “boxer’s fracture,” this evidence suggests Pell sustained the injury when he hit Brewster in the face which then prompted Pell to start kicking Brewster in the head.

Vu also dimmed the light on investigation failures. The eye-witnesses both state that they saw one of the men repeatedly kick Brewster. Washington State Patrol (WSP) Crime Lab analysis found NO EVIDENCE of Brewster’s blood DNA on Franck’s shoes. In contrast, police had visual evidence of blood on Pell’s shoes but failed to obtain DNA samples from Pell.

The obvious question to the inaction by police and the suppression of exculpatory evidence is, “Why?” The answer comes down to misleading DNA evidence the State can use to deceive a jury. The prosecution has focused its case on Brewster’s blood found on Franck’s clothing.

After Franck stopped Pell’s attack, he assisted Brewster who was covered in blood and unconscious. Consequently, two small blood stains were found on the upper thigh area of Franck’s jeans and on the back of his jacket. No traces of blood were found on his jeans below the knees, another indication Franck did not kick Brewster.

Jurors can make informed decisions of guilt or innocence only if they are presented with the facts. The facts are the State gave the admitted killer, Spencer Austin Pell, a plea agreement to remove him as a suspect and to cover up their misconduct. In their fervor to convict, the State has targeted Rodney Taylor Franck for a crime he tried to stop.

Editor’s Note: While Deputy Prosecutor Kasey Vu and VPD officers have caved in to corruption in this case, Clark County Prosecuting Attorney Tony Golik is ultimately accountable. At the end of the day, Golik must answer to the cover-up and malicious prosecution of Rodney Franck. The US~Observer will make certain the public is aware of this corruption, and we intend to do our job thoroughly where Tony Golik is concerned.

It would be wise for the elected prosecutor to deal with this case before it becomes an albatross for Clark County!

If you or anyone you know have suffered from wrongful charges or conviction in Clark County, WA., contact the US~Observer. We can Help! Email: editor@usobserver.com – 541-474-7885. 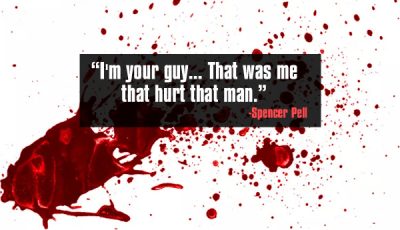