BREAKING NEWS
70% of people in local jails are not convicted of any crime
Tyler Perry offered a job to the first inmate released under a new conviction integrity program in Georgia
Police reject judge’s call to apologize over wrongful conviction
US states move to stop prisons charging inmates for reading and video calls
‘It’s a Lie, but It’s Fun’: An Officer’s Falsified Report Leads to a Man’s Suicide 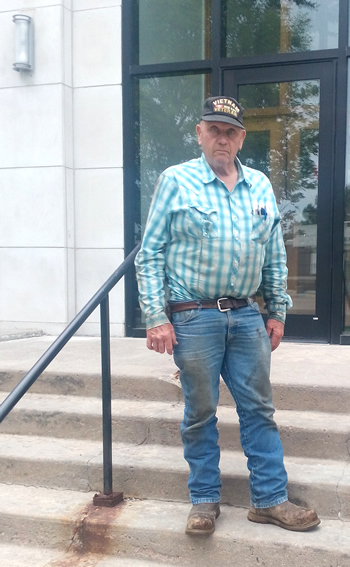 Kit Carson County, CO – Richard (Rick) Crisp is a patriot at heart, and he is a Vietnam War veteran. Like many war vets, he suffers from PTSD, and with that, “Social Skills Deficits” (SSD) among other issues that make him 100% VA disabled. Oftentimes, because of his SSD, he has no filter, and many find that abrasive. One thing is certain, Crisp loves this country and “fears for its decline into an immoral, socialist/communist state.” And, Richard Crisp is currently fighting for his reputation; his innocence; his country; and the well-being of Kit Carson County, Colorado – his county – which he believes is rife with corruption.

Crisp says that his current legal situation started in 2013 when a protection order was awarded against him to a tenant he had living in his house. According to Crisp, her name was Teresa Vick and at that time he says she and the person staying with her were allegedly involved with drugs. It has been reported that Vick currently resides in Akron, Colorado.

Crisp maintains that Vick had not paid rent, and that when he found out that “Vick was using drugs” and allegedly had a pedophile living with her, he asked them to leave. They wouldn’t. Crisp then went to the Kit Carson County Sheriff’s Department to have them help him. Unfortunately for him, they refused to get involved, telling him he had to go through the confusing and lengthy process of eviction.

Even though Crisp was renting his home out, he didn’t know the intricacies of landlord-tenant law and found himself struggling to understand why, as the property owner, he couldn’t just have someone removed – especially if that someone wasn’t paying their rent. Why would the law be so one-sided as to do away with protections for the property owner?

Admittedly, Crisp overstepped and took matters into his own hands by shutting off the utilities which were in his name. He claims to have never stood in the way of them initiating services in their own names. Instead, the tenants called the sheriff’s department claiming Crisp had threatened them, something he adamantly denies.

Deputy Travis Belden responded – Belden is now Kit Carson County Undersheriff. It’s been alleged that Belden got a statement from Mike Santella stating Crisp had told him that he was going to kill the tenants. According to Crisp, Santella insists he did not tell then-deputy Belden anything of the sort.

However, according to Crisp, the statement was read into the record by Deputy Belden in front of Kit Carson County Judge Michael K. Grinnan. Even without Vick ever showing up in court, she was successful in getting a protective order against Crisp. As stated by Crisp, Judge Grinnan just didn’t believe him when he told the judge he hadn’t said those things.

When Crisp finally got Vick and friend to move, he petitioned the court for the removal of the protection order. Again, court was convened, and “the accuser never appeared.” In fact, Vick allegedly never showed up to any hearing – so much for the right to face your accusers! This time the judge simply altered the order allowing Crisp to enter a store and school, both places he had previously been barred from entering.

But Crisp reportedly thought the protection order had been dismissed completely. Even still, he requested a Colorado Bureau of Investigations report on himself, to see if he had anything that kept him from exercising his 2nd Amendment right to purchase a gun. According to Crisp, the report came back clean. So, he went to buy a gun. That’s when he was arrested for violating his protective order and charged with contempt of court.

Crisp recalled what happened next, “I got a public defender to represent me on the violation and told him I had done a background check and CBI. He didn’t care about that and he didn’t try anything except to attempt to get me to take a plea bargain on a lesser charge. I told him it’s just a nice way of saying I was guilty and I wouldn’t ever admit guilt to something I didn’t do.” Crisp continued, “Soon, I went back before the judge for a pretrial hearing. On the way back in, the public defender said that I wouldn’t win my case. So, after we got the trial date set, I asked Judge Grinnan for another attorney. The judge wanted to know why, and I told him I did not feel I was being represented. Judge Grinnan got angry with me when I told him my attorney wouldn’t look into anything. He told me to get my own attorney and then told me to get out.”

Before Starkovich could argue the contempt charge, Crisp was again being targeted for harassment. It’s a charge the prosecutor’s used to try to leverage a plea deal from him.

According to Crisp, this harassment allegation arose from a woman named Brianna Kinkade who Crisp says he had loaned money to and had not been paid back. With his SSD, “Crisp was the perfect mark.” Kinkade allegedly feigned being frightened of Crisp once he asked for repayment.

Like many others who face real psychological/social skills issues, it was reported that Crisp was immediately disbelieved and Kinkade’s allegations given undue weight. Not only did Crisp have the prior protective order working against him, most people – especially law enforcement – just don’t understand and know how to deal with individuals who suffer from PTSD and SSD.

It was the fact Crisp had the previous protective order that Kinkade used to her benefit in her “Victim Impact Statement” where she wrote, “As I know for a fact that he has a restraining order against him already for threatening a couple’s life, I feel that he should serve jail time …”

One has to wonder how Kinkade knew he had a previous protective order in the first place. Did Crisp tell her about it, and she used it to her advantage? Did a deputy tell her, thereby negating the principle that in every allegation the accused is innocent until proven guilty? Either way, Crisp was already guilty in the eyes of the law; especially in the eyes of Undersheriff Belden, who to this day allegedly intimidates and heckles Crisp, both off and on duty – some Kit Carson County residents have intimated that Crisp isn’t the only one the undersheriff abuses.

Crisp, however, never gave up fighting for the truth, and with Starkovich’s aid was able to get his original contempt charges dismissed. But Crisp found himself with another protective order, one that law enforcement were all too eager to violate him for.

On one occasion, Crisp had gotten gas at a store where Kinkade had worked. He did not see her vehicle and didn’t think she was there. He never saw her. However, he was pulled over and arrested later in Yuma. According to Crisp he was held in jail for 3 days while his PTSD increased in severity. He maintains that he plead with the deputies to help him and they wouldn’t. On the 3rd day, Richard Crisp hung himself.

It wasn’t long after that when Judge Grinnan again sat over Crisp, this time at trial.

According to Crisp, information that he had loaned money to Kinkade and had not paid him back was kept from the jurors. Crisp was found guilty.

Crisp recalled, “At the sentencing, I had a character witness named Jerry Rowe who said he has known me for over 30 years, and that I was a honest man. He said I had trouble dealing with my Vietnam experience, but was honest. And that if I said it was a loan, it was. The judge said that even if it was a loan, I didn’t handle it right. To me, the judge knew she lied but allowed me to be railroaded anyway.”

Crisp wants people to know that while he might not have a filter, and sometimes doesn’t know how to act, he cares greatly for others. He wants law enforcement to take their oaths seriously and truly serve and protect their fellow citizens, not be the boot that steps on their necks. He wants people to know that he felt abused by law enforcement while in their care, and the justice system as a whole.

One thing is true, law enforcement either doesn’t know how to deal with individuals who require special handling, or they just don’t care to. Either way, the system is broken and people like Richard Crisp are those who pay the heaviest price.

We reached out to Undersheriff Belden for comment and clarification. He has not responded. We also sought comment from both Teresa Vick and Brianna Kinkade. Vick has not responded to our questions. Kinkade could not be reached but we will keep trying. We will update the article in the event they contact us.

Crisp maintains his innocence on all of his charges and would like his convictions overturned.

As long as the justice system criminalizes those that have real social and psychological issues, and doesn’t offer them the support they truly need, you can bet Crisp and vets like him will end up facing more allegations and ultimately, more time in jail.

Editor’s Note: Anyone with information on other injustices in Colorado, Teresa Vick, Brianna Kinkade, Judge Michael K. Grinnan, Undersheriff Travis Belden or any other Kit Carson County Deputies, or anyone mentioned in this article, please contact the US~Observer by calling 541-474-7885 or sending an email to editor@usobserver.com.

Like us to get the latest from US~OBSERVER delivered to your feed.