When elected to public office, individuals sometimes rise to the level of their responsibilities for the position to which they have been entrusted by the voters. Other times the voters are taken for a breathtaking ride by an incompetent person holding a public office. The incompetents are easy to spot; they treat their public office as their personal fiefdom bestowing favors and promotions on their friends, making life difficult for those who see them for what they are, and basking in their new found power. There is a great similarity between these individuals and the king in the comic strip the Wizard of Id. Like the king, a little shrimp of a man, they have tremendous egos, want personal loyalty from their subjects, and would like to send their detractors to the gallows for proper punishment. They will also promise the voters anything to get elected and then renege on those promises they knew they couldn’t keep. These are the wheeler dealers, cigar puffing, backroom politicians who will sell their soul to Old Nick and sign their name on the line for seven good years. [1] 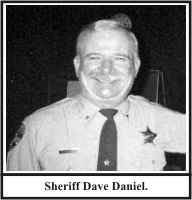 Sheriff Dave Daniel has been in office for the past six years and five months, and his time is running out. Daniel sits in the chair and wears the badge, but he is really not the sheriff. When a man fails to keep promises he has made to the voters, he becomes an imposter, a straw man with no real moral authority or deserved respect from the voters. Daniel lost his way shortly after becoming sheriff as documented by many articles in the US Observer chronicling his past few years in office.

Daniel has supported several recent ballot measures that would increase property taxes, and the voters have rebuked him severely in several past elections by their vote of rejection for each tax measure. Daniel’s credibility was severely dashed in November, 2004 when voters said no to his endorsement of a tax to fund more jail beds. This vote was in part a lack of trust and respect for the sheriff. A sheriff must have the respect and confidence of the people to function effectively in any county. In this article the case will be made why Daniel no longer has that respect and confidence of the people of this county, and why it is time for him to resign his position as sheriff.

Recently Josephine County (JoCo) and its insurer paid out over $300,000 to cover a suit brought by two Josephine County deputies who, according to a mediator, were fired without just cause. Daniel appears to have fired Wayne Dykes and Carol Huffman because of past grudges and their loyalty to the people of the county rather than the sheriff. Daniel’s losing of the lawsuit makes an extremely strong case for the unjustified firing of Dykes and Huffman. The $300,000 loss means insurance rates for the county will increase, and there will be fewer services available for county residents. It is unacceptable that Josephine County residents must pay for lost lawsuits that should never have happened. This powerful issue placed in the voter’s pamphlet listing the reasons for a recall would most certainly guarantee a humiliating defeat for Daniel if he declines to resign his position as sheriff.

Former DA had it right

Before Daniel was elected to office, former District Attorney Tim Thompson had the foresight to realize that Daniel did not have the administrative capabilities to be a sheriff. In a letter to the editor of the Daily Courier Thompson stated his reasons why Daniel shouldn’t be elected sheriff. Daniel’s response to the letter was to call the former DA a SOB. I asked Daniel if he said that, and he replied that he didn’t remember. A witness does remember. Daniel has been unable to form a working relationship with the new county commissioners as well as the previous commissioners. There was a deep personal enmity between Daniel and former Commissioner Jim Brock. Daniel was a leading factor in an attempt to get rid of the commissioner’s office and replace it with a county manager and place all public offices under the manager’s control except his own. This attempt to change county government was soundly defeated by county voters. Daniel was forced to endure another humiliating defeat. In fact, Daniel has a lawsuit pending against the present board of commissioners, paid for with taxpayer’s dollars. He filed the suit because the commissioners refused to approve the extra money to pay for a promotion of the jail commander to become a lieutenant. When Daniel ran for office he said, “The sheriff only gets a certain amount of money. You do the best you can to continue to serve the citizens of Josephine County with that amount of money.” [2]

Five deputies and three patrol cars
for one clucker

Daniel sent seven deputies to the winter Olympics in 2002, and this was reportedly done by paying other deputies overtime to fill those positions. This was another outrageous use of budgeted funds supposed to be used to protect the residents of Josephine County, not to fulfill one of Daniel’s fantasies. Daniel supported the insanity of the great chicken raid at the Nick Gombos ranch in Williams, Oregon. Five deputies, three patrol cars, $300 in overtime, and the midnight waking of a sleeping Judge Gerald Neufeld to get a signed warrant for a 1:00 AM adventure to recover a chicken named Speckles. Josephine County and Daniel received negative national guffaws for this choice stupidity. In fact, Daniel reportedly got a rubber chicken from the state sheriff’s association for laughs. This is the mentality Josephine County has running a multimillion dollar sheriff’s office.

The political reward
system at work

Daniel’s idea of promotions often depends on who is personally loyal to him. How about the promotion of a deputy from a civil Sgt. to a Lieutenant with a nice pay raise to oversee patrol and detectives, even though the man had never worked in either of these areas? It seems that for some deputies in the JoCo sheriff’s office the way to get ahead is give your personal loyalty to the sheriff. Promotions often don’t go to the best qualified, but are used as a political reward system. Daniel can also be vindictive, as shown by the time he fired a Sergeant one day before his retirement.

Sheriff caught coming out
of Wal-Mart

Two major problems in Josephine County are drugs and theft. Burglaries are a hot button with county residents as they are not being investigated. You can have the theft of thousands of dollars worth of personal property, and no deputy will comes to your residence to investigate. Sure, you can talk to a deputy on the phone, but that’s as far as the investigation will go. The door is wide open for burglaries in JoCo. This same problem was plaguing the former sheriff Dan Calvert. Daniel saw a weak spot in Calvert’s reelection bid and told the public he could solve the problem without asking for more money. Here is what Daniel said he could do, “For the last three years what we have heard from the sheriff’s department is I can’t respond to your burglary because we don’t have the funds. You’ve heard that I can’t answer your telephone calls because we don’t have the personnel. We can’t come out and take your stolen car report; it’s beyond available resources. Well, I think that’s unacceptable, unacceptable to me not to respond to your burglaries and thefts. What you have to do, you have to reallocate your resources and do the best job possible with what you have to make it work and protect and serve the citizens of Josephine County. It should have been done three years ago. Could be done today. Will be done when I’m elected.” The fact is, Daniel has not kept his campaign promise. The voters were deceived and burglaries are not being investigated as Daniel promised they would be. Daniel still gets his check and perks every month regardless of what he promised. Then Daniel spewed out a mouthful of pickle juice saying, “ If you come into the Josephine County Sheriff’s Office and you want to visit me and I’m not there, it’s not because I’m in Florida (Calvert went to Florida) or it’s not because I’m in Las Vegas, it’s because I may be in Merlin answering a call or I’m in Murphy takin’ a report. That’s the reason I’m not there.” When was the last time anyone saw Daniel in Murphy or Merlin taking a report? Daniel wasn’t in his office recently, and he wasn’t in Merlin or Murphy either protecting the public. He was seen brazenly coming out of Wal-Mart (in shorts and a t-shirt) with his wife and they were carrying packages during regular working hours. Remember the sheriff isn’t accountable to anyone and he can come and go as he pleases. Could this be why Daniel recently appointed Brian Anderson as the Undersheriff? Now Daniel is in the position where he can actually do nothing and still get paid while going shopping at Wal-Mart during regular working hours. What ever happened to Daniel’s election promise that “I’ll be in uniform, out on patrol myself.”

The issues are many that show Dave Daniel does not have the administrative ability to oversee 100 employees and a multimillion dollar budget for the sheriff’s office. At one time Daniel spent $20,000 with a firm to show him how to be an administrator, and it was wasted taxpayers’ money. Daniel also received a vote of no confidence from the deputies in the sheriff’s association, and for good reason. He’s like a small boy in a candy shop with a $20 bill and no one watching him, or so he thinks. Daniel has failed as a sheriff, and it’s time for him to tender his resignation for the good of the residents of Josephine County. The mentioned $300,000 lawsuit that was paid out because of Daniel’s bad judgment is just one of many lawsuits that have been settled, and should a recall become necessary to restore confidence in the Sheriff’s Office, the cost of a special election is peanuts compared to what continued lawsuits created by Daniel’s incompetence could cost the county. Just from the point of public liability Daniel is a dangerous man to have acting as sheriff; some might consider Barney Fife a better bet. [3] His track record is that of a loser. He’s not a runner, and he’s not a good sheriff.

It’s time for Daniel to look in the mirror and reflect on the past six years, then take a careful look at himself. Resigning would certainly be a better option than facing a recall. It is unlikely that Daniel would survive a recall; his liabilities far overshadow any assets he has accumulated while in office. If Daniel were to resign, the obvious recommendation is for the commissioners to select Undersheriff Brian Anderson to serve out the remainder of Daniel’s term.

Tell Dave Daniel
what you think

If you believe that a case has been made against Dave Daniel’s competence as an acting sheriff, and that he should immediately resign his position, for the good of the sheriff’s office and Josephine County, then please call the sheriff at
(541) 474-5123 and/or e-mail jocosheriff@co.josephine.or.us. Send a copy of your e-mail to joconewsline@hotmail.com.
Those interested in a recall and gathering signatures should contact John Taft at (541) 479-0645 or by e-mail at joconewsline@hotmail.com.

Blindness and Death with Impunity?

The Plea Bargain Prosecution of the Innocent