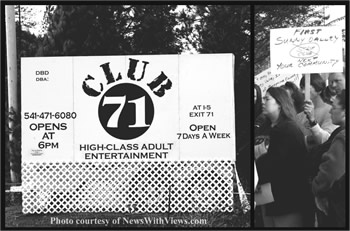 Sunny Valley, Oregon – On Sunday February 26, 2006 shortly after 2:00 a.m. 23-year old Michael Conrad Depuglia was pulled over by Oregon State Police (OSP) due to his inability to stay in his lane. The OSP observed the vehicle swerving on the freeway.

According to OSP Officer Holsworth, Depuglia was driving while suspended. Depuglia was driving because his passenger, 20-year-old Nicolause Xavier Orozco was too intoxicated to drive. He reportedly couldn’t spell his name correctly and gave the officer an incorrect date of birth. Orozco was cited for Minor in Possession of Alcohol and Providing False Information.

Holsworth reported the two left Club 71 in Sunny Valley shortly before they were pulled over. Holsworth’s report was forwarded to the Oregon Licquor Control Commission (OLCC) in Milwaukie, Oregon. Orozco is a minor and should not have been served by the club or even allowed inside.

What will OLCC do about it?

Many complaints have been sent to the OLCC over the past year concerning Club 71 violating the law by serving excess alcohol to patrons, for disturbances at the strip joint and for criminal allegations against strip-club owner Richard Larry Lacey. OLCC has been slow to act regarding Lacey and his strip-joint, however in a recent phone interview with an OLCC investigator the US~Observer was informed that they have quite a file on Lacey and that they are preparing their case… It is clear to this writer that any action by OLCC is long overdue in light of the following.

On April 22, 2005 Timothy Little was involved in a near fatal accident on I-5 after leaving Club 71. According to witnesses, Little arrived at the strip-joint sober, however after his accident his blood alcohol level was .22, nearly three times the legal limit. At this juncture Club 71 had already been the recipient of numerous complaints and OLCC should have revoked Lacey’s license.

On September 2, 2005 three Rogue River men arrived at Club 71 to celebrate a 21st birthday. The three reportedly became highly intoxicated at the strip-joint and were forced to leave by Lacey. Shortly thereafter Jason Giampa who was driving the three back to Rogue River wrecked his vehicle. One occupant had a serious head injury and just recently underwent surgery. According to witnesses, Giampa was literally wiped-out upon leaving the strip-joint. He was charged with driving under the influence of intoxicants, reckless driving and two counts of assault in the fourth degree. Lacey wasn’t charged with anything for getting the individuals drunk (serving in excess) at his strip-bar, and even though OLCC was again informed of yet another episode at Club 71, they failed to act.

Our question for OLCC is; will it take someone getting killed after drinking in excess at Club 71 before you act?