“Community Caretaking” At its Ugliest: JoCo vs. White

Cave Junction, OR – On April 26, 2008 Robert White Jr. was arrested from outside his own home for interfering with a peace officer, as well as resisting arrest by Josephine County Sheriff’s Deputies Iles and Mason.
According to Deputy Iles’ incident report, White was an angry, aggressive individual who walked up to him outside of the White home with fists clenched yelling obscenities when he and Deputy Mason were conducting a “community caretaking function” by searching the home against the wishes of White’s wife and brother, who were both inside at the time. In Iles’ own words, “Robert attempted to brush past me on the porch and I took hold of his right arm … Robert just kept repeating that we were not invited and that I had better let go of him … At this time, Deputy Mason returned to the porch [from inside the house] and took hold of Robert’s left arm … We pushed Robert up against the side of the house … and I then took Robert to the ground in the front yard … I retrieved my Taser from my belt and … I placed the Taser on Robert’s chest and pulled the trigger.” Iles’ story continues with one more tasing and the eventual handcuffing and arrest of Robert White Jr..
What Deputy Iles fails to mention is that the Whites are not unknown to him. In fact, Deputy Iles knows them very well, having been involved in a physical conflict with the Whites, and others, several years earlier on August 21st, 2004 at a beer garden at the Josephine County Fair.
One of the County Fair security guards who witnessed the 2004 conflict stated, “I hold the deputies, and specifically Iles, one-hundred-percent liable for the riot that ensued that evening and believe the plaintiffs [Whites] did nothing to elicit the official mistreatment they suffered.”
The Department settled the suit, which had cited excessive force, negligence and battery against several officers, but specifically Iles, costing the Josephine County taxpayers a settlement of $45,000.00.
The actual physical conflict at the fair was a culmination of several days of intimidation by Deputy Iles toward members of the White family as outlined in their complaints. According to Pam White, Robert White Jr.’s mother, Iles had approached her in an intimidating fashion on more than one occassion during several days of the fair. So much so, in fact, Pam decided not to attend one of the evenings out of fear that she’d run into Iles again.
It is painfully obvious that there is a history between Deputy Iles and the entire White family.
Man with a knife
On the April 2008 night of Robert White Jr.’s arrest, a call was placed to the Josephine County Sheriff’s Office regarding a man with a knife. Iles and Mason were dispatched to investigate claims that a young man named Dustin was headed back to a party off Caves Hwy. to “slit some throats.” Various people at the party claim that Dustin was confronted and kicked out of the party earlier after he had beaten his girlfriend/cousin, and that he had made threats about coming back with a knife to hurt people. So real was this threat that Dustin’s own Grandmother was the one who called police after he had come back to a separate residence, taken a butcher knife and headed out. Even the party-goers believed he’d be back, one saying, “a few of us went down to the street with bats … we thought he was going to come back with a knife.”
As per Isles’ report, they responded to this call and were talking to the grandmother when he and Deputy Mason heard “loud voices … coming from the vicinity of where [blacked out] had described” and the two deputies headed out to investigate. In Deputy Mason’s report, however, it was described as “noise” which prompted them to drive off and look for its source. Both reports say that as they drove they heard a single gun-shot, which, if you have ever lived in the Illinois Valley, is not uncommon, but given the circumstances, according to the deputies, they believed that their subject could have made it back to the party and that the situation could have escalated. So, the deputies headed in the direction of the gun shot leading them to the White residence.
Earlier in the Evening
Robert White Jr. is a hard working family man. He works out of state, and when he is back during those brief times, he also tends his farm’s fields. Oftentimes, this means working through the night. His primary responsibility is to his wife and their two daughters. 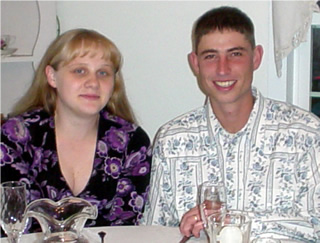