Conservation Easements The Rape and Pillage of Land Owners 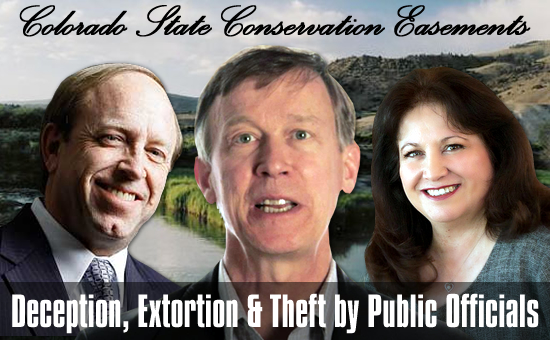 Colorado – The US~Observer has recently started an investigation into what is obviously a scheme to fraudulently obtain ranchers and farmers property for nothing or next to nothing by utilizing controversial conservation easements. From what we know so far, the major players in this scheme are the State of Colorado, brokers and land trusts made up of or directed primarily by attorneys. At the time of this writing the US~Observer believes that the ultimate goal of the perpetrators is to get control of the ranchers and farmers land, which includes water, mining, and development rights.

This process in the State of Colorado concerning conservation easements began in 1999, when the land developers asked certain attorneys to design a state bill that would allow tax deductions and tax credits to be generated in exchange for landowners to donate all or portions of their property to go to conservation easements, reportedly to preserve the land for “ranching, farming, and open space”; thereby preserving natural resources. This bill was introduced at a time when the state enjoyed a surplus of tax revenue.

However, in the mid-2000s and later when the economy began to take a downturn, the state began seeking additional or new tax revenues even if it meant double-crossing people who had legally and honestly availed themselves of tax incentives offered earlier by the state.

A DECADE later, the State of Colorado is now on a relentless mission, with the “behind the scenes” help of other entities, to recoup tax credits, plus multi-years of penalty & interest, from landowners who legitimately took advantage of the scheme established by the state legislature. The ruse the state is using is – that the lands that were appraised by “state-licensed” appraisers at the land owner’s expense are actually of zero value. How’s that for pure insanity!

In one case, involving one family and three separate, contiguous conservation easements, the IRS calculated their 2003 conservation easements to have at least 87% of their appraised value, but officials within the State of Colorado, particularly the Executive Director of the Colorado Department of Revenue (CDOR) Barbara Brohl and State Attorney General John Suthers, are virtually ignoring the IRS. Brohl & Suthers are promoting this insidious injustice even in light of the fact that the Colorado Statutes (2003-2007) identified that the IRS regulations were the only standards that applied to Colorado Conservation Easements, and they simultaneously argue that statutes enacted 2008-2013, apply retroactively to the “open space” donations made between 2003-2007.

Amazingly, Governor John Hickenlooper settled his own personal conservation easements with the IRS in the midst of his gubernatorial campaign and the CDOR accepted “his” IRS settlement. In other words, they didn’t attempt to monetarily rape & pillage Hickenlooper, like they have approximately 600 ranchers and farmers throughout the state. Go figure – Hickenlooper is Brohl’s boss and he obviously has great influence over Suthers…

Governor Hickenlooper could have ended the abuse and financial destruction of ranchers and farmers at any time during his tenure of office, but has remained mute, seeming to enjoy Colorado’s stolen benefits as well as his enhanced connections to high-dollar interests.

What the state is doing to them is absolutely unconscionable and the arguments being used by the state and certain attorneys can only be described as an egregious abuse of power … an outrageous story of “David &; Goliath.”

Editor’s Note: The US~Observer is preparing an in-depth article on this issue for our April edition wherein we will be naming the main culprits and their true motives.

Anyone with information on Colorado’s Conservation Easements or any of the players involved is urged to contact the US~Observer by calling 541-474-7885 or by emailing editor@usobserver.com. 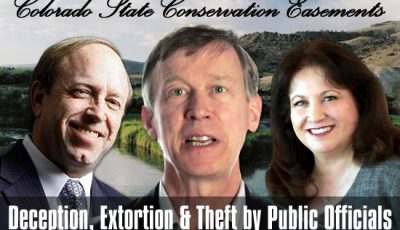