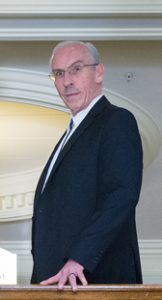 Clatsop County, OR – There is nothing worse than an elected prosecutor who is bent on getting convictions rather than serving justice. When evidence proves beyond measure there is more than a reasonable doubt, it should be the duty of these elected agents to immediately drop charges and not hold these innocent people in fear of legal jeopardy. It is abhorrent to do otherwise, and any prosecutor who routinely does so should be subject to removal – which is exactly what should happen with Ron Brown, the elected District Attorney (DA) of Clatsop County, Oregon.

As previously reported in the US~Observer, on September 28, 2019, Jewell Varsity Basketball Coach Dave Samuelson was cited by Clatsop County Deputy Sheriff Eric Dotson and Sergeant Chance Moore for Sexual Harassment and Telephonic Harassment of his assistant coach Shannon Wood. The Telephonic Harassment was later dropped for lack of phone calls. The Clatsop County Sheriff’s Office failed to conduct any investigation before leveling these false and ludicrous charges at Samuelson.

On February 13, 2020, Samuelson was arraigned again for an additional 9 counts of Sexual Harassment/Abuse. The allegations are that Samuelson “touched her [Shannon Wood] butt with yoga pants on & annoyed her” a total of 10 times over a 2-year period (between January 1, 2018, and December 31, 2019) with no specific dates or times. There are no witnesses to this alleged Sexual Harassment/Abuse and, like the original charges placed on Samuelson, there was no investigation conducted. There is, however, strong evidence that Samuelson did absolutely nothing wrong.

The additional charges were filed (stacked) by DA Brown for the simple purpose of forcing Samuelson into a plea bargain. Ron Brown has used this exact corrupted practice countless times during his time in office. He recently attempted to use this tactic with Justin Simonson, who is also featured in this edition as having had his charges dismissed! 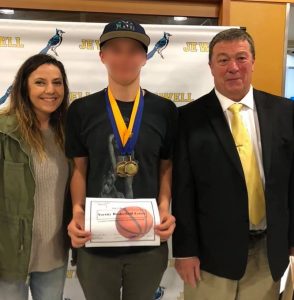 According to highly credible sources, during the time that Wood claims Samuelson “touched her butt with yoga pants on and annoyed her”, she took part in the following acts or arranged for them to occur:

The Samuelson’s allowed Wood to use their Home Depot credit card to get new flooring for her house with the understanding she would pay it back. Shannon Wood then reportedly continued to use it and didn’t pay. The Samuelson’s were notified by Home Depot that $1,300.00 was owed and no payment had been made in 3 months. They put a stop to Wood’s use of the card and demanded she pay the balance. Wood finally paid the debt approximately two weeks before she accused Dave Samuelson of multiple counts of Sexual Harassment/Abuse.

Brown answers to no one except the voters at election time, if someone were to run against him. This despicable human hides in the shadows like a venomous spider, striking his victims at will. He is literally the most powerful individual in Clatsop County government – he poses the greatest threat to liberty and justice to all its citizens. No matter who you are, I assure you, you are not safe when DA Ron Brown can take your freedom from you whenever he chooses to. If you haven’t committed a crime, this dangerous human being can and often will make one up.

Having concluded our in-depth investigation into this case, I find conclusively that the only shred of evidence existing in this case is the accusation by Shannon Wood that Samuelson patted her on the outside of her yoga pants. Wood obviously made her accusation in retaliation for Samuelson turning her into Jewell School Superintendent Steve Phillips for sexual improprieties brought to his attention by a parent of one of the players on his basketball team. On September 24, 2019, just one day after a student’s parent told Samuelson about their concern regarding Shannon Wood’s possible indiscretion with Brian Meier, Samuelson informed Steve Phillips, Jewell’s School Superintendent. Then, on September 27, 2019, just three days later, Shannon Wood, “retaliated against Dave” and contacted the sheriff’s department with allegations that he had sexually harassed her. According to the police report, Wood claimed Dave Samuelson had, “repeatedly grabbed her butt and made lewd comments to her.” Wood’s criminal report also mentioned that Samuelson was allegedly stalking her, and Wood made the claim he had “attempted to kiss” her around August of 2018 – which is over a full year before she brought the allegations to the police. 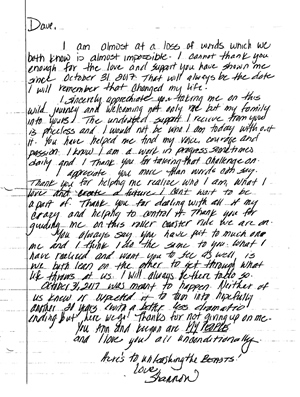 In a letter Wood delivered to Samuelson on February 8, 2019, just seven months prior to her accusing him, Wood told Samuelson she loved him. This letter was written after the date Wood claimed Samuelson “grabbed” her butt and tried to kiss her (in her police report filed later). Shannon Wood’s letter stated, “The undoubted support I receive from you is priceless and I would not be who I am today without it. I cannot thank you enough for the love and support you have shown me since October 31, 2017. That will always be the date I will remember that changed my life… I appreciate you more than words can say… I sincerely appreciate you taking me on this wild journey and welcoming not only me but my family into yours… Love Shannon.”

In August of 2019 at the Clatsop County Fair, Samuelson attended the livestock auction to purchase a 4-H animal. Wood reportedly came and sat with him several times, was very friendly and also asked him to take one of her children home with him from the fair, to spend the night at his house.

All of the above occurred within the period of time that Shannon Wood claimed Samuelson was committing crimes against her. This writer finds it absurd to believe Samuelson did anything other than show love and kindness to a woman (Wood) who others have claimed is extremely dangerous. 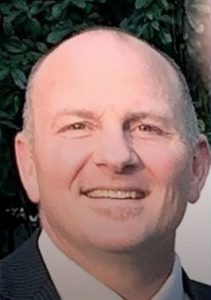 Superintendent Phillips reportedly told one witness, after the initial allegations were made against Dave Samuelson, that he had discussed it with his Principal Jon Wood and neither of them would ever be in a room alone with Shannon Wood. So, why did Phillips team-up with his reported “buddy” DA Ron Brown and attempt to destroy Samuelson, especially when it was obvious that Wood made up her “false allegations” in retaliation for Samuelson reporting her alleged improprieties with Meier?

One witness has stated that Phillips had it out for Samuelson because Samuelson was opposed to the School Board hiring him in the first place. Another witness confirmed this when they stated, “Phillips thinks his _ _ _ _ doesn’t stink. He is good friends with Ron Brown, and they act like they can do whatever they want in Clatsop County. Dave Samuelson is an ethical man who has no problem speaking his mind and when he opposed Phillips, he created an enemy. It’s that simple.”

Despite Phillips knowing full well that Wood had to be retaliating against Samuelson he placed all kinds of sanctions on Samuelson and stripped him of the coaching job that he held for many years.

On November 18, 2019, the Jewell School Board met and affirmed Superintendent Steve Phillips sanctions against Samuelson, limiting his access to the school, terminating him as the varsity basketball coach and requiring his spouse or a person over the age of 40 to supervise him if he was ever on school property. These sanctions and others remain in effect to this day. Phillips reportedly told Samuelson, it’s the #meetoo movement so you’re guilty. The boards document states if Samuelson applies for the basketball coaching job in the future he will not be considered. Phillips reportedly told Samuelson that he could not have a 62-year-old guy in the school that grabbed young women by the ass. He also told Samuelson that he was a predator.

This was all accomplished by Phillips and his lap-dog school board prior to the US~Observer publishing our initial article regarding this case wherein we exposed that Shannon Wood falsely accused another person in the past of rape and much, much more.

It appears that since we forced Phillips out into the light of day he is making every effort to return to the shadows he is used to.

We are informed that Superintendent Phillips has shared with his staff that he wants nothing to do with the Samuelson trial. However, it really isn’t up to Phillips as we are told the defense plans to call him as a witness. If this happens, Phillips will find that he is not nearly as powerful as he thinks he is!

On October 21, 2020, a Settlement Hearing was held in the Samuelson case. At this hearing it was determined by DA Ron Brown and his alleged victim Shannon Wood that if Dave Samuelson would just pay Wood $20,000.00, the criminal case against him would be dismissed – need I say more about DA Ron Brown’s brand of “Justice”?

A second Settlement Hearing was scheduled for July 15, 2021, and Samuelson declined to take part in it. Samuelson stated, “I refuse to take part in this act of extortion for a crime I am completely innocent of.”

During a June 24, 2021, pre-trial hearing Samuelson’s Attorney Rich Cohen submitted the defense witness list which included 5-pages of statements from just one witness. This witness clearly stated in the deposition given to the investigator that Dave Samuelson was an honest, trustworthy person. Further this witness stated that his accuser Shannon Wood was known to be dishonest, and that Ms. Wood has filed complaints against several other staff members at Jewell School and she has concerning behaviors.

This hearing was scheduled as the pre-trial hearing to make sure the defense and the prosecution were ready for trial. The defense was ready, witnesses had been interviewed, and subpoenas and mileage checks delivered in preparation for the trial that had previously been delayed to July 6, 2021. 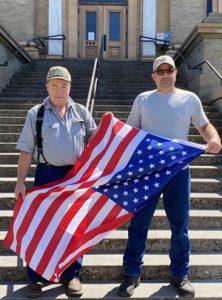 Dave and his wife Ann Samuelson are concerned about the costs of almost 2 years of being trafficked through criminal court. They have been forced to spend tens of thousands defending Dave. The cost of 5 trial delays, trial prep, investigators, etc. is certainly mounting. The Samuelson’s are also concerned from the standpoint of taxpayer dollars being spent.

They have received calls from others who made plea deals with DA Ron Brown, even if they were innocent like Samuelson simply because the cost was too much, and the threats and intimidation made them feel they had no choice. Dave Samuelson refuses to admit to something he didn’t do, and he will not bend to extortion.

Editor’s Note: If you have any information of wrongdoing by DA Ron Brown, his wife Tiffany or any other corrupted players in this article, call us at 541-474-7885 or send an email to editor@usobserver.com. You just might be DA Ron Brown’s next victim and if you aren’t concerned now, you will be then. 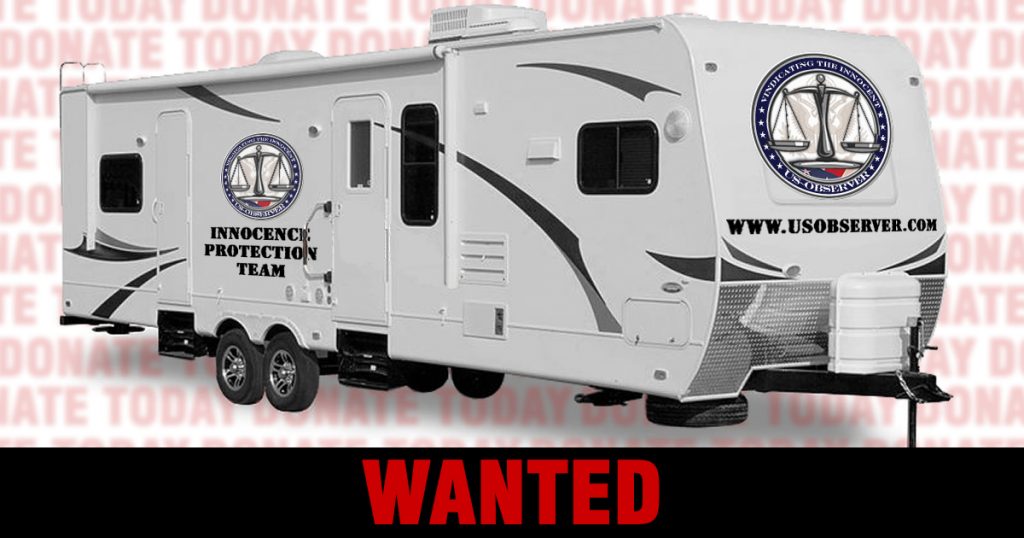 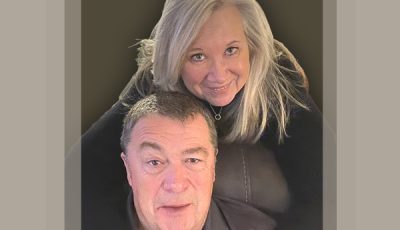 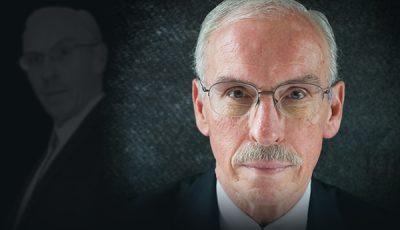 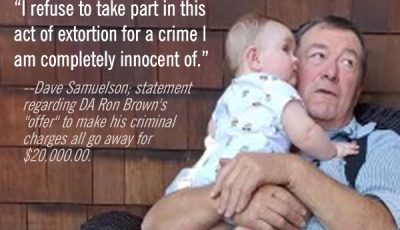 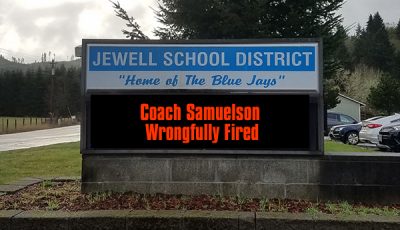