On January l5, 2006 Deschutes County Sheriff Deputies forcibly removed Native American Delilah Starr from the residential property she has occupied for the past 20 years. In our last edition we told the story of how Deschutes County started issuing commercial code violations to Starr, without ever going in her house, for installing plumbing and wiring without a permit when the home had neither wiring or plumbing. The county also issued citations because Starr used a porta potty. In all, Deschutes County ran the fines up to over $110,000.00 and then bought the property at a Sheriff’s sale for the amount of the fines. 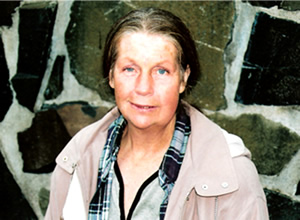 Delilah Starr after being removed from her property

Deschutes County Sheriff Les Stiles was notified that Starr, a Native American, was in the process of having the land declared a Native American Allotment, immune from the commercial claims of the corporate STATE OF OREGON or its sub division DESCHUTES COUNTY. Sheriff Stiles chose to ignore the ancestral claim of Star and sent his armed deputies to remove and make homeless this innocent, Indian woman because the unsightly appearance of her property offended the sensibilities of cold hearted Deschutes County officials

The US~Observer has been following closely the culture of corruption in the Deschutes County legal system and the protection of that culture of corruption by the Deschutes County Sheriff’s office. We have reported how Deschutes County Sheriff Captain Tim Edwards has been seen giving the corrupt attorney Claud Ingram escort service in and out of the courtroom to protect him from the angry friends of Patricia Wishon. Wishon’s friends have appeared with her in court to help block the attempts by Ingram, Wishon’s ex-husband Santiago Torres, and attorneys Linda Hasse and Anthony Albertazzi to allegedly steal property left Wishon by her late husband.

Not content with helping the corrupt attorneys allegedly try to steal the Wishon property the Deschutes County Sheriff’s Office is now engaged in the equally odious behavior of forcibly removing Native American Delilah Starr from her property in violation of Treaty rights protecting her property rights as a Native American.

The US~Observer will continue to expose and cover the allegations of the corrupt and shameless behavior of attorneys, judges and those in the Sheriff’s Office in Deschutes County who are protecting this alleged corruption and abuse until those public officials involved are shamed into ceasing such behavior and once again observe their oath of office to uphold and respect the rights of the citizens of Oregon regarding “equal protection” and “due process” of law.

A hearing has been scheduled for March 28, 2005 at 9:00 a.m. at the Deschutes County Courthouse on all motions relating to the Patricia Wishon case.