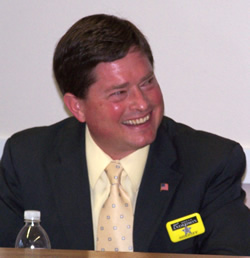 Josephine County, OR – Recently, several ex-Josephine County sheriff deputies along with one on-duty officer have stepped forward with affidavits claiming that on many occasions Brian Anderson, current undersheriff, made disparaging remarks toward the public in briefings to his staff saying, “F— ’em. They get what they pay for.” According to an affidavit Anderson even went on to say that he would release the prisoners of the jail if the public didn’t want to fund it and let them deal with the criminals. In the affidavits Anderson also instructed deputies not to respond to anything other than emergency calls. Included as well was information alleging Anderson allowed “false investigations against deputies to proceed despite his knowledge the deputies were innocent,” because they didn’t belong to the “A Team” – a group some in the department call the good-old-boy club that currently exists. One of the affidavits even cites specific criminal misconduct. The US~Observer has also obtained a recent letter written by Grants Pass Chief of Police Joe Henner stating that the city police will no longer back the sheriff’s department unless it is an absolute emergency. This is because there are no procedures in place within the sheriff’s department to take care of many situations they face. In his letter, Henner specifically mentioned that he had previously brought this to the attention of Undersheriff Anderson, but that no procedures have as yet been adopted. These affidavits and the letter by the city police chief come at a pivotal point for Anderson who is seeking to be elected as the county sheriff in the upcoming election on the grounds that he is well qualified for the position and has been doing a good job as undersheriff.

On October 10, 2006, US~Observer investigative reporter John Taft called Anderson for comment on the allegations stated in the affidavits, specifically that of him saying, “F— the Public.” Anderson at first responded that his remarks were taken out of context but later recanted saying that he never used the F-word. However, commenting on the grounds of anonymity one high-ranking public official stated that he had heard Anderson say this many times. 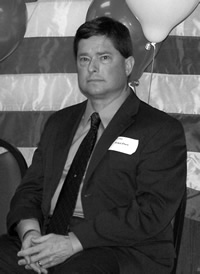 One of the affidavits reads in part, “…Brian Anderson a patrol lieutenant … came in to briefing and told ALL of us, ‘I want all of you to only go out on emergency calls and do NO patrolling f— the public they don’t want to give us any money then f— them go out on the emergency call and come right back to the office.‘ … We were not allowed to go to burglary or theft calls and many more.”

The evidence supporting that Anderson told his staff in briefings to only work on emergency calls comes in the form of the department’s own published reports on burglaries in 2004. The report says that they had received 516 burglary calls but that only 95 of these cases were reviewed and only 43 were actually investigated, something many, especially in the outlying county areas, know all too well. One resident stated that she had called the sheriff’s department when her home was burglarized but didn’t hear back and it was only after several calls and almost a week when they actually responded by sending out officers. According to this woman who wished to remain anonymous, when they did respond they were rude and never investigated the crime.

Anderson has, in part, based his platform on running for the position of sheriff that there needs to be an individual in the top position who has budgetary experience as funding is, according to Anderson, the biggest law enforcement challenge this county faces saying, “we don’t have stabilized funding so we end up losing a lot of our officers to other agencies because they might not have a job next year. And to me you can’t fight the meth problem and any of those other issues if you don’t have the staff to do it. You need detectives. You need deputies out there handling calls. You need directors for when people call in. You need the jail, a jail that’s adequately funded to house people. I think funding is the biggest issue.” But mismanagement of funds is one of the many issues the affidavits address calling into question Anderson’s ability to head the department, one which obviously has more issues than previously known. As for “budgetary experience;” any experience Anderson does have is for naught given the excessive amount of lawsuits (most successful) that have been filed against the Josephine County Sheriff’s Office while Anderson and Dave Daniel have overseen the department, or in better terms, failed to oversee the department.

The authors of the affidavits all feel the public need to be informed of what is going on in the department. One of the affidavits reads in part, “In making these statements, it is not my will or intent to bring disfavor upon the Josephine County Sheriff’s office. I still have many friends there that are good people that work hard. I simply want the citizens to know the truth about what has been happening …” Another even says, “I do not believe that the public would want someone like this (Anderson) to be our sheriff for Josephine County.”

Editor’s Note: It has come to light that the editor, Denis Roler, of the Grants Pass, OR local news publication, the Daily Courier, also has the affidavits and has yet to publish any kind of story. Is Roler trying to protect Undersheriff Anderson by remaining silent, or does he feel that it isn’t worthy news for their readers? Whatever the answer, it makes one wonder.

Denis Roler at the Daily Courier can be reached by calling: (541) 474-3700 or by e-mail at newsdept@thedailycourier.com

To voice your opinion to Brian Anderson, he may be reached by calling the Josephine County Sheriff’s Department: (541) 474-5123 or by e-mail at jocosheriff@co.josephine.or.us