The Fight Against Genetically Engineered Crops 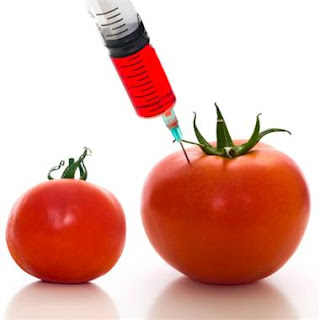 Jackson County, OR has been discovered by Syngenta, one of the largest agri-business corporations in the world, which is now growing genetically engineered sugar beets (designed to survive being doused with the herbicide Round Up) for seed in small rented plots up and down the Rogue Valley, from Ashland to Grants Pass.
There are other genetically engineered crops growing right now in Jackson County – alfalfa and Bt sweet corn (which conveniently contains insecticide in every cell of the plant). How many of these exist and where they are growing is anyone’s guess, as they are no longer regulated.
Genetically engineered organisms, also called genetically modified organisms (GMOs), are living things that have been artificially modified so that they contain genes from different species. This is a completely different process from natural breeding, which can only take place between closely related forms of life (tomatoes with tomatoes, but not tomatoes with fish).

GMO-Free Jackson County is a group of local citizens who are trying to pass a county ordinance through the initiative process to prohibit the growing of GMO crops in our county. It won’t affect what’s sold in stores, or prevent the release of animals like GMO salmon; this is only about plants. The law protects farmers, including a clause that gives those who are currently growing genetically engineered plants a year after enactment to harvest and sell their crops. Any genetically engineered crops planted after enactment will be subject to immediate abatement. There are no new taxes or spending in the ordinance.
There is extensive due process in the ordinance including a requirement that the County get a search warrant before it can enter private property. The law will depend for enforcement on current county administrative law. For some US Observer readers this may be a shortfall, but citizen initiatives cannot contain more than one issue. Trying to combine judicial reform with a GMO ban would have caused the County to reject the whole initiative. As it is, the County DA has ruled that the proposed initiative is constitutional.
Early this spring, Chris Hardy of Village Farm in Ashland wanted to lease an additional field for his organic vegetable and seed operation. He discovered that a neighboring field on Normal Avenue in Ashland was to be planted with Syngenta’s GMO sugar beets. Through persistent phone calls, Chris finally found out that Syngenta has been in our valley at least since 2009, growing their GMO crops under the radar in unmarked fields.
There may be no place left to grow and propagate non-GMO beet or chard seeds (both the same species — Beta vulgaris) in our valley. Pollen blowing between GMO and non-GMO Beta vulgaris can move artificial genes around. The only way to find out if contamination has occurred is to do an expensive lab test on every seed. If a small farmer has to bear the costs of that testing, it’s time to pack it in and take a day job.
The argument of the Monsanto-friendly Jackson County Farm Bureau is that farmers should be able to choose whether to grow GMO crops or not. (But letting farmers choose to grow a useful crop like hemp is not something they support. Go figure.) What happens however is that the arrival of GMO crops actually removes choice. Farmers are gradually forced to grow GMO crops or have their non-GMO crops contaminated. This story is being repeated all over the world.
So far in the USA, it has been left up to corporations like Syngenta to keep a buffer of at least four miles from other producers of beet and chard seed. But this is a charade — there is no list kept of who is growing crops for seed in our valley! In spite of a regulatory requirement under their USDA-issued permit to keep 4 miles away from other chard and beet seed growers, Syngenta planted its GMO seed crop in several plots less than a mile away from Village Farm, Fry Family farms and Lakotas Farms. After a complaint was made, the USDA’s Biotech Regulatory Service sent an investigator here to gather information. However the results and findings of that investigation are kept secret. We will never be informed of the investigation’s outcome. 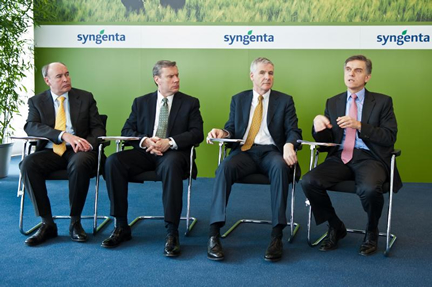 Syngenta — chief executive officer, chief financial officer and two chief operating officers
“I attended Syngenta’s 2011 full year results announcement in Basel, Switzerland. As the only U.S. journalist attending, I was quickly surrounded by nearly 30 journalists from around the world. And we’re not talking just agricultural publications. Since Syngenta is traded on stock exchanges around the globe, journalists from the financial sector outnumbered the farm reporters.” –Mark Moore

Syngenta can’t grow their GMO sugar beets in open fields in Switzerland, their home county, because cultivation of GMOs is banned there. Yet they are able to come to Jackson County, where conditions for growing out large amounts of their GMO seed are perfect, rent some land, and endanger the livelihoods of neighboring farmers. This is not a business plan that helps the economy of our county. We get chump change for land rent, and the real money goes straight into Syngenta’s overflowing coffers in Basel. Wake Up America, indeed.
Syngenta is a multi-national corporation with over 26,000 employees and revenue of over $13 billion last year. Get ready for a barrage of pro-GMO ads once the initiative to ban GMOs gets on the ballot. They’re going to tell you that we need GMO crops to feed a hungry world, but don’t believe it. There are no GMO crops that truly increase yields or are any better suited to local conditions than conventional crops.
It’s important to act now; soon it may be too late. This industry has lots of new GMO crops in the pipeline, including grapes and grape rootstocks, wheat, potatoes, peppermint, sunflowers, tomatoes, rice, onions, cucumber, and apples. (Want an apple that doesn’t brown after being sliced? They’ve got one, but I’d advise you not to take a bite).
The initiative petition to pass an ordinance banning the growing of GMO plants in Jackson County is waiting for a court hearing on the language of the initiative title and summary. When that process is completed, GMO-Free Jackson County can begin to collect the 4,668 valid signatures necessary to get the initiative on the ballot. Then – Let the People Decide.
The ban on GMO crops is designed to assure that Jackson County has and will continue to have a reliable (i.e.economically viable) source of healthy food grown locally and responsibly and is available to its citizens, markets, food retailers, and restaurants. It protects our seed growers and farmers from genetic contamination of their products with unknown consequences and aggressive prosecution by corporate lawyers suing to protect patent rights on corporate seeds. It protects our County from the growing problem of pesticide resistant superweeds that can emerge in only a few years and render valuable crop land worthless because you can’t kill the weeds. Genetically engineered crops are NOT tested for human safety by the USDA. They are “presumed to be safe” and “substantially equivalent”. But there are NO independent studies to back up that claim, only assurances from the people who manufacture them. However, there is plenty of evidence available that contradicts that presumption of safety by the USDA and self serving industry. Buying organic foods is one sure way to avoid GMOs because they are not allowed. By definition organic foods are foods developed as nature intended them and not by some transgenic experiments in a laboratory by people whose primary motivation is to sell more herbicides. But even “conventionally farmed” foods would benefit from a ban because they can be sold as GMO-free, albeit not certified organic. Consumers are free to make that choice.
It protects organic farmers.
Go to the www.GMOFreeJacksonCounty.org for more information.