George Floyd was murdered but who was responsible? 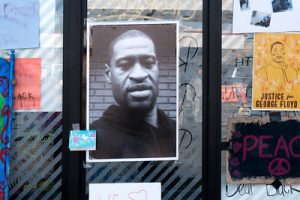 From Minneapolis to New York, LA to Seattle, tens of thousands of people, from all walks of life are marching and screaming “Black Lives Matter” and “Defund the Police.” Yet as these individuals march, they remain totally deceived regarding the real corruption in the justice system. It is a deception promulgated by the system’s cesspool, mainstream news media and political pundits.

It has been proven many times over that we have corrupted law enforcement officers in America. It is also a fact that we have plenty of good, honest, hard-working police who lay their lives on the line for us each and every day. The good ones face die-hard criminals so that we do not have to. However, their dedication and sacrifice is most often overlooked due to the actions of the bad apples among them. The old saying that one bad apple spoils the whole barrel is certainly applicable.

Let us all use some common sense – are the police really the main problem we have? Absolutely not! Those who direct the police; those who we have entrusted with oversight of the police are, and always have been, the entire root of the problem. If government were not corrupted and held bad police accountable as opposed to granting them immunity or creating cover-ups, and prosecuted the bad apples, things would continually get better, not worse.

There are those within all levels of government who attempt to do the right thing, however, they are literally fighting an uphill battle, too, with corruption rampant in their ranks.

The Real Culprits – If the Shoe Fits, Wear it

Our criminal justice system is controlled and directed by many corrupted attorneys and thieving politicians (many of whom were or still are attorneys). These people seek to empower and enrich themselves above all else. They operate in the shadows and use any opportunity to continue their abuse (hypocrisy and theft) on the American people. One way they do this is by focusing the limelight on the actions of bad apple cops, and condemning the police. Yet, their conspired actions are far worse. In fact, their self-serving incompetence and corruption ultimately allow for the horrible measures taken by the bad cops, including the blatant murder of George Floyd and others. In other words, their actions – or lack thereof – have resulted in innocent men and women spending many years in prison for crimes they did not commit. Their complete lack of oversight allows the few abusive police officers to flourish. This is directly akin to murdering the innocent, if not worse!

Our secretive criminal justice system has nothing to do with justice most of the time. It has everything to do with providing big pay for corrupt attorneys and judges (who are attorneys as well). It’s about very expensive and lengthy “legal procedures.” It’s also about argument, when it should all be about right and wrong, facts, evidence, and ultimately, justice. Being forced to obtain an attorney is among one of the top things that Americans fear most but rush to do when they are in trouble with the law or are attacked civilly.

Hypocritical, thieving attorneys and politicians must wear the albatross of guilt for the horrible condition our country is in. These two groups of destructive classes have created a myriad of completely unconstitutional laws to entrap the otherwise innocent individual and at the same time, created other case law to insulate themselves – to protect themselves against having to answer for their own wrongdoing. Be aware, there is absolutely nothing in our Constitution that gives anyone in the justice system immunity – they created it out of thin air.

These dangerous culprits have replaced our Constitution with case law. Attorneys charge their clients ungodly amounts of money for often nothing more or less than leading the client to a plea-bargain or a settlement. It is rarely ever about finding the truth and protecting their client. And their cohorts, most judges, sit back in their hypocritical black robes and legislate from the bench. The judges protect the entire Racketeering scam called “the justice system” by protecting the prosecutors – who in turn protect the police force, who blindly protect the very system that has grown corrupt.

How do we stop these human leeches and bring our Constitution back to life? How do we eliminate the crook’s immunity and demand accountability?

Exposure is the One and Only Answer!

Without exposing the corruption and problems in the legal system, nothing will ever change, it will only continue to get worse. If enough Americans get together and create the proper exposure, then the following three steps will become a reality and they will literally work wonders.

Now, let us all ask ourselves; if we were to implement the three guidelines above, what problems would we face with obtaining justice – with accountability?

Very few. That is why you will see the mainstream continue to peddle the rhetoric of those with the most to lose – the real power players who ensure the People are subservient to them, not how it was intended. And, it is why the system will never be forced to change unless more organizations like the US~Observer take a stand and fight those who are truly guilty of killing all of those like George Floyd.