“Grand-Father Rights” No Good in Oregon? 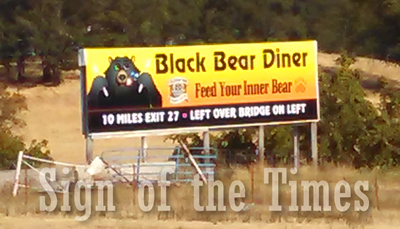 By Kelly Stone
Investigative Reporter
Jackson County, OR – This case is about an issue that affects countless people, in every state in this nation. This issue comes in all shapes and sizes and is known as Administrative Government. Most of the time, Administrative Agencies are abusive, heavy-handed, dictatorial and very expensive for all taxpayers. Administrative Government is always unconstitutional, just as it is rapidly contributing to the downfall of America. Again, although this article focuses on a case in Oregon, this case is mirrored on a daily basis in each and every other state. In other words, it applies to all of us – to each and every pocketbook.
Clams, LLC based in Medford, Oregon owns a billboard near Interstate 5 in rural Jackson County, Oregon. The billboard has been where and how it currently is since before Interstate 5 was built and long before there were any federal or state laws being promulgated by Congress or state legislatures, limiting billboards.
Years ago the Oregon Department of Transportation (ODOT) attempted to have the billboard removed. ODOT stopped that effort because in 2006 the Oregon Supreme Court held that ODOT could not constitutionally discriminate between on premises signs (signs advertising a business on the same premises as the sign) and off premises signs (signs advertising a business located away from the sign).

In response to the Oregon Supreme Court decision, the legislature amended the form of the law but left the same on site/off site distinction in place. This is the same distinction the Oregon Supreme Court held unconstitutional.
ODOT has just ruled that the amended law is constitutional even though it is functionally identical to the older unconstitutional law.
ODOT has also just ruled that it does not have to pay Clams, LLC just compensation for taking the billboard because Clams, LLC has not shown that the billboard was lawfully created and maintained. This ruling is a real puzzle because the only evidence concerning the sign’s existence is that it was installed long before laws restricting billboards were enacted and that it has remained the same advertising billboard for as long as it has existed.
The notion that the government can make speech it doesn’t like – rural billboards – illegal, flies in the face of the First Amendment to the United States Constitution and Article I, Section 8 of the Oregon Constitution. It also wipes out “Grand-Father” rights, which have been a valid and recognized right across the nation since its inception. The only recognized and constitutional way around “Grand-Father” rights is the payment of just compensation for the government taking the rights from their holders.
Oregon is not willing to pay for the sign. Oregon wants to steal the sign. Both the Fourteenth Amendment to the United States Constitution and Article I, Section 18 of the Oregon Constitution require the government to pay for property the government takes. ODOT says that it is not required to pay for a billboard unless the owner proves the sign was lawfully erected and was maintained as a sign since it was erected. Clams, LLC proved those two facts and yet Oregon is too greedy and immoral to pay for what it wants.
Oregon knows that what it is doing is unconstitutional and immoral. Attorney and constitutional scholar, James E. Leuenberger has told Oregon that it is violating both the federal and Oregon Constitution.
Lawless government is tyranny. The time is now to speak up and tell ODOT to stop stealing property, to stop silencing sign owners. If you remain silent now you should not be surprised when the government steals your property and tells you to stay quiet about it.
If Administrative Government concerns you, as it definitely should; if you are tired of Bad Government, and you are sick and tired of government stealing your property and therefore your rights, call Matthew Garrett, the Director of the Oregon Department of Transportation, at 888-275-6368 and tell him.

Assisting The Public “Off Duty”