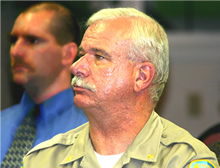 Josephine County, Oregon – Josephine County Sheriff Dave Daniel announced on December 9, 2005, his intention to run against current Commissioner Jim Riddle in the next election. Daniel reportedly charged, “The biggest problem facing the county is lack of leadership.” Daniel continued, “I feel I can provide that.” Given the Sheriff’s track record, nothing could be further from the truth. Realizing that Daniel has done a miserable job running the Sheriff’s Office, does he really think he can fool Josephine County voters for a third time and buffalo them into thinking he can run the entire county?

Recently Daniel announced that he wouldn’t run for a third term because he was tired of politics. Upon hearing of his intention to run for commissioner those of us at the US~Observer began laughing out loud. We are once again hearing empty words from this “double-minded” man and soon we will hear all of Dave’s promises just as we did when he ran for Sheriff … all of which turned out to be outright lies.

Daniel has factually cost Josephine County taxpayers hundreds of thousands of hard earned tax dollars because of lawsuits filed against him by his own deputies and we are informed that there are more coming … And now he expects voters to elect him as a commissioner. During his second term as Sheriff his own deputies gave him a vote of no confidence.

The Observer has published many articles regarding Daniel squandering his budget, to his making ridiculous and prejudicial decisions. We won’t rehash all the valid charges against Daniel at this time; however they can be viewed on the web at usobserver.com.

Daniel started his new campaign by telling the Courier, “We need to keep our current employees whole because they will be doing more work with less people.” Good advice from a Sheriff who abused so many of his own employees, fired several of them wrongfully and threatened them publicly that they had better be loyal to him or else.

Closer to election time the Observer will dig up old bones and new ones on Daniel in an effort to assist voters in seeing that this guy is not an administrator and has no business running anything in Josephine County, Oregon. Don’t miss our up-coming editions wherein we will publish everything from Daniel sending deputies to the Olympics for security, to sending 5 officers out at mid-night to arrest an alleged chicken thief … all while his office was supposedly under financial crises and while he was screaming to the public for more tax dollars.

Citizens need to begin talking and informing others about our incompetent Sheriff and the dire consequences should he become a commissioner here in Josephine County, Oregon.

Club 71 “Kicked to the Curb” in Court