Southern Oregon’s Jackson County is abuzz with activity as the commissioners step forward to enforce the people’s wishes to use their land as expressed in Measure 37. Oregon voters overwhelmingly passed Measure 37 in the November, 2004 election, sending a clear and decisive message to the state to free private property from the greedy grasp of those more interested in control than the constitutional mandates and god-given rights regarding private property. Measure 37 made a giant step forward in wresting control of private property from state control. Within most Oregon county governments we find a cabal of elected officials scurrying to side-step voter approved law…but not in Jackson County, Oregon. 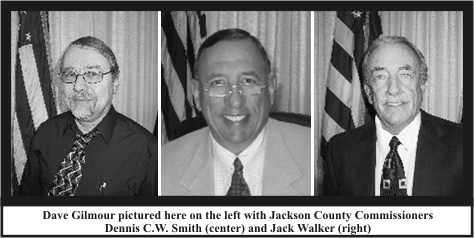 Jackson County Commissioners Jack Walker, Dennis C. W. Smith and Dave Gilmour stepped forward to process requests brought by those who have been denied use of their land for years by the local planning commission, the state Land Conservation and Development Commission (LCDC) and the Land Use Board of Appeal (LUBA). These government agencies and others have assiduously used every legal mechanization available, even those far outside their constitutional rights, to control private property and deny Oregonians the use of their land.

Even with millions of dollars poured into the state by outside agitators interested in state control of private lands Oregonians, in both metropolitan and rural areas, voted for private property rights. State government officials and their minions made efforts to twist and obfuscate the issue but to no avail. The people sent a resounding message to Salem that they want to control the use of their land. Even now, however, state officials are working to undermine the wishes of the people.

In many Oregon counties governing bodies are using every means possible to deter property owners from filing to have their property’s value restored. From excessive fees to outrageous liabilities, property owners are now facing out of control leadership openly circumventing the vote of Oregon citizens and Amendment V of the US Constitution…But not in Jackson County, Oregon where Commissioners C.W. Smith and Jack Walker readily chose to represent their constituents and the supreme law of the land, recently reiterated by Measure 37. In turn, Commissioner Dave Gilmour who wanted to impose a permit fee on applicants was forced to side with them.

Since the 1960’s those in Oregon government have been slowly and insidiously maneuvering to erode private property rights through more government control. Planning Commissions in every city and county made it nearly impossible for the people to use their land as they wished. There was a myriad of government Boards, Departments and Panels that worked overtime to deny land-owners use of their land. It was a costly racket beneficial only to those with an interest in lining their own pockets and increasing government control over the private sector. For every openly governmental policy and department there was a half dozen more quasi-governmental parasites that lived off the land use regulations.

The planning commissions in each county became the sole arbiter of who could use their land and who couldn’t. Thousands were denied not only the use of their land but they were not compensated for this taking. When questioned, land use planners always fell back on the authority of the LCDC. It was never anyone’s fault locally that the landowner could confront directly. Owner after owner, across Oregon, was stymied by government stone-walling and effectively denied the use of their property. The process was made so costly and time-consuming that few could afford to proceed past the local board’s decision. They simply lost the use and control of their land without compensation.

Measure 37 is only the first step in restoring land use to the land owner but it certainly is a step in the right direction. One major factor in halting the unfair taking of land by the state is to make them compensate the landowner when he is not allowed the use of his land. In America when someone, whether private or government, wants something they must pay for it. No law should be made without compensation for a taking. If the government has denied the property owner use of his land and the owner has not been compensated for that taking the order should be void. Nothing more nor less.

Land use must be restored to the owner. If local government wishes to impose restrictions on local properties they should have to bring these wishes to the people and have them act on them. Metropolitan areas should not have control of rural land use. Land use issues should and must be locally directed.

If the people of any town, city or county want control of their property they had better step forward at election time and vote in pro-property candidates. The only way for people to maintain their rights is to exercise their rights!

Editor’s Note: Jackson County voters definitely made the right decision in the last election by electing C.W. Smith to the Jackson County Board of Commissioners. It appears that the Observer has finally located county commissioners (at least two anyway) that haven’t chosen “MONEY and CONTROL” as their god…