From Being Falsely Imprisoned to Fiercely Defending Others

Editor’s Note: Jeffrey Deskovic’s case exemplifies why people need the US~Observer for wrongful arrests/convictions. If Deskovic had hired the US~Observer to conduct a thorough investigation into his case and force the facts upon all concerned, including the public, Jeffrey Deskovic would have never been wrongfully convicted. Unlike the mainstream media which usually enhances the belief that someone is guilty simply because a police report says so, the US~Observer investigates, finding the facts and using the truth as a shield for the innocent. Relying solely upon attorney’s in this day and age is like playing Russian Roulette with only one empty chamber. Taking the facts of your innocence public for the world to see is only part of what we do. Ensuring the innocent maintain freedom – that’s our life’s work – 541-474-7885. 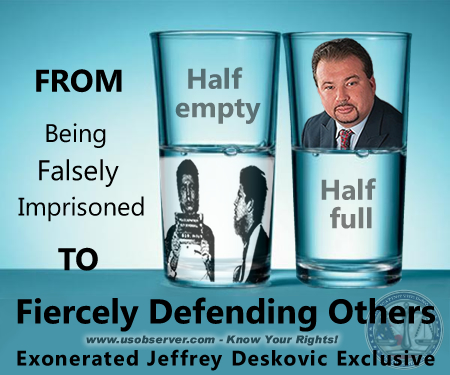 New York – Jeffrey Deskovic is pursuing a law degree in order to represent convicts in their post conviction efforts who have been falsely convicted. What makes Deskovic unique is his own story of being falsely imprisoned, and being one of the few to achieve freedom.

At the young age of 17-years-old, Jeffrey Deskovic was convicted of rape and murder and sentenced to life in prison. Evidence contrary to his guilt existed, yet he was still convicted. On Nov. 2, 2006 at the age of thirty-three after struggling for years to prove his innocence, Deskovic was finally exonerated, in large part due to ironclad DNA evidence. After sixteen years behind bars, Deskovic was legally exonerated for the crimes of which he was wrongfully convicted.

After his exoneration, Deskovic sued several government agencies and individuals that aided in his wrongful conviction. Deskovic settled all but one. He wanted to take the last person to court; Former Sheriff’s Detective Daniel Stephens, the person Deskovic referred to as, “the most culpable” for his wrongful conviction. Stephens had elicited and coerced a false confession from Deskovic and had also fabricated evidence. Detective Stephens also received multiple letters of commendation for, “…the professional manner in which he conducted himself…” while helping wrongfully convict Deskovic.

When Deskovic’s civil trial came to an end, jurors awarded him over $41 million. Deskovic stated, “I feel elated. The jury obviously saw that Daniel Stephens’ testimony was not truthful.”

What the jury did not know was that Deskovic had already entered a “hi-low suit” wherein his award would not exceed $10 million if he were to be victorious. After court costs and lawyer fees (33%), Deskovic walked away with sixteen years of his life lost, and $35 million less than what he was awarded by jurors who had no knowledge he wouldn’t get the full amount.

Although he walked away with much less than awarded, his hopes were still high. Deskovic stated, ” I feel like I finally got the fair trial I never got before.”

With a hunger to help others, Deskovic eventually created The Jeffrey Deskovic Foundation for Justice which, “seeks to exonerate the actually innocent, i.e., prisoners who have no connection to the crime for which they were convicted.” Since 2012, Deskovic has helped exonerate William Lopez, William Haughey and is currently working on freeing Lorenzo Johnson, an inmate who had his sentence vacated due to insufficient evidence, and was then forced back to prison after the US Supreme Court reinstated his conviction on appeal by Pennsylvania’s Attorney General.

When asked why he is pursuing his law degree he said he believes he can better serve the people who need his help by being an attorney, saying he has current concerns with, “not being able to sit up front in the courtroom with clients and argue cases.”

Now, Deskovic is roughly two years away from finally earning his law degree. When accomplished, he will have hit another milestone in his life. He will be one of only seven known people out of two-thousand to practice law after being exonerated. Deskovic stated Jarrett Adams, Kian Khatibi, Marty Tankleff, Anthony Robinson (admitted to litigate at U.S. Supreme Court), Donald Glassman and Chris Ochoa are the few who’ve gone on to acquire their law degrees after being exonerated.

In a bittersweet ironic twist of fate, Deskovic attends Elisabeth Haub School Of Law At Pace University which is only nine-and-a-half city blocks from the courthouse where he was wrongfully convicted at age seventeen and also the place where he was later exonerated. Each day he passes the courthouse, it serves as a stark and personal reminder that the system is broken and there are innocent people in prison who need a champion.

When asked why he’s so passionate about helping others, Deskovic stated, “I know what it’s like to be wrongfully imprisoned and I want to be the person that I wish I had on the outside back when I was still wrongfully imprisoned.” A statement like this can’t be fully appreciated unless you’ve been where Deskovic has – behind bars and innocent. Deskovic is truly an inspiration to many who strive to have their voice of innocence heard from behind prison walls. He’s also a role model to many who have had the opportunity to know him, and his story.
If he’s not in class, then he’s likely flying around the globe, shining light on injustice. Deskovic plans on mostly working on post conviction cases, with some civil rights litigation once he passes the bar exam. With his firsthand knowledge, it may not be long before he’s traveling yet again, representing the falsely convicted from coast to coast – pro hac vice!

Jeffrey Deskovic is a modern day hero who now wears a suit and tie in lieu of his “prison greens.” His outlook on life and drive to help others is something that should inspire all.

Deskovic’s foundation is non-profit. If you could find it in your heart to help exonerate others, please do so by clicking here.

DONATE TO THE DESKOVIC FOUNDATION

Dishonorable Ronald Grensky, A Poor Example of a Judge