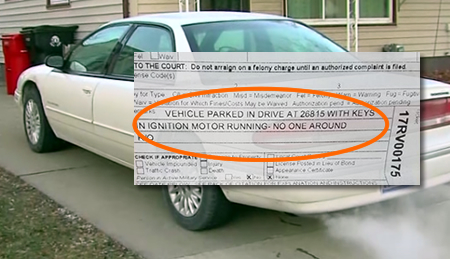 Roseville, MI – Taylor Trupiano was issued a ticket by the Roseville, Michigan Police for leaving his car unattended while it warmed up in his own driveway. Last week, Trupiano lost in court. Then, his attorney got in trouble, too.
Without claiming to be the media, or getting ‘special permission’ from the court, Trupiano’s attorney allegedly had someone broadcast the hearing on Facebook Live which the judge held him in contempt for.
Trupiano’s attorney, Nicholas Somberg stated, “This ordinance only applies to areas open to the public and according to people v. Raya, you cannot even get a DUI in your own driveway.”
District Judge Marco Santia had a different view. As he ruled against Trupiano, he cited his opinion regarding the ordinance. The judge stated that if the vehicle is accessible to the public, and since strangers can gain access to your driveway, it’s included.

Trupiano stated, “I don’t think it applies to your private property and on top of that if it’s a safety issue they didn’t solve the safety issue by leaving a ticket. The car was still running (and) left unlocked.”
An undisclosed person paid Trupiano’s $128 ticket for him, but the court hasn’t decided if it will accept the payment. Trupiano didn’t say whether or not he plans to appeal the ruling. A property rights advocate stated, “it goes without saying that private property no longer exists when you can’t even warm up your own car in your own driveway.”

From Jailor to Jailed

Inebriated deputy resigns and rakes in another $20k