The Key is the Transfer of Public Lands 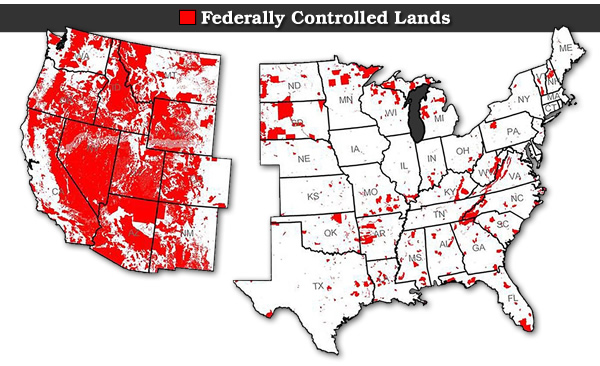 By Ken Ivory
If we fail to secure our statehood rights to the transfer of the public lands, it will not be because it is illegal, unconstitutional, or impossible. If we fail to enforce this “solemn compact” of statehood, it will be because our leaders lack the knowledge or the courage to do what has already been done.
Raising a Voice
As much as 90 percent of the lands in Illinois, Missouri and several other states were federally controlled for decades when Thomas Hart Benton was elected to the U.S. Senate in 1821. In “A Thirty Years View,” Benton recounts: “My election to the Senate of the United States… found me doing battle for an ameliorated system of disposing our public lands; and with some success. I resolved to move against the whole system…”
Thanks to one man, Illinois, Missouri, and neighboring states have on average, less than five percent federally controlled lands today. So distinguished was Benton’s courage that President John F. Kennedy featured him in his best-selling book, “Profiles in Courage.”
Is that just ancient history? Well, upon admission to the Union in 1959, the state of Hawaii exercised courage and compelled the federal government to transfer title to all the public lands directly to the state. Its Enabling Act of March 18, 1959 includes, “The United States grants to the state of Hawaii, effective upon its admission into the Union, the United States’ title to all the public lands…title to which is held by the United States immediately prior to its admission into the Union.”
A Federal Obligation
Some ignorantly assert that it would be illegal or unconstitutional for western states to compel the federal government to transfer title of the public lands to the states even though it’s been done before—repeatedly.
Public Lands Held in Trust
The public lands question is older than our nation. By 1780, in the midst of battling for independence, the 13 states had run completely out of money. In this dire circumstance, seven states pledged in trust to the confederated government their claims over all the western lands, but only to one: create “distinct republican states,” with “the same rights of sovereignty, freedom and independence as the other states,” and two: use the proceeds from the transfer of these western lands, if any, to pay the debts from the Revolution. Courts, congresses, presidents, and the language of the statehood enabling acts reaffirmed these solemn compacts, but for which our nation may have perished at its birth.
String of Broken Promises
In 1976, Congress enacted a policy to unilaterally alter this 200-year-old obligation, moving to retain forever the public lands in federal ownership with the Federal Lands Policy Management Act. Under FLPMA, Congress promised there would be multiple use/sustained yield with local planning on the public lands. Congress also promised to pay western states and communities for not utilizing their lands and resources to fund the education of their own children and care for their own communities. These promises are known as PILT (Payment in Lieu of Taxes), SRS (Secure Rural Schools funds), and FML (Federal Mineral Lease payments).
PILT payments by some estimates were only 13 cents on the dollar of the average taxable value of the land. SRS payments were only a fraction of the revenues local communities had generated from harvesting timber. Traditionally, timber harvesting kept the forest fuel loads in check and local economies thriving. As for FML, states east of Colorado with the same statehood promises retained 100 percent of their mineral lease royalties instead of the 48 percent promised to western states by Congress.
FLPMA imposed an untenable deal upon the western states to be paid paltry amounts for not utilizing their own lands and resources. This year, under the guise of “sequestration” to cut federal expenses, the federal government began limiting western revenues in the form of PILT, SRS and FML cutbacks.
So, Congress breaks its 200-year-old obligation to dispose of the public lands. Instead, it promises PILT, SRS, FML concessions, and multiple use/sustained yield with local planning to placate western states. Now it is reneging on even those terrible substitute promises while imposing ever-increasing restrictions on states, communities, businesses and individuals, preventing them from using their own lands and resources to care for their own communities, lands and forests, and grow the national economy in the process.
Blessing State Sovereignty
Fortunately, in 2009, the U.S. Supreme Court opened the door for a resolution of this economic and environmental dilemma facing not only western states but also our nation. In Hawaii v. Office of Hawaiian Affairs, the U.S. Supreme Court unanimously declared that “the consequences of a State’s admission are instantaneous,” such that Congress does not have the authority to unilaterally alter or diminish “the uniquely sovereign character of that event” particularly “where virtually all of the State’s public lands are at stake.” This makes sense. If Congress could unilaterally alter or diminish the very terms of statehood, states would cease to be states and would become mere administrative subdivisions of an all-powerful national government.
The only solution big enough to promote the health, access and productivity of our lands is within our reach. We must choose this to fund education, better care for our lands and forests, protect access, create jobs, and grow local, state and national economies and tax base. If we don’t, we will answer to our children, future generations of our states, and to our nation as a whole that we failed, not because it was illegal, unconstitutional or impossible, but because we and our leaders simply lacked the knowledge and the courage.
Ken Ivory is a member of the Utah House of Representatives and the president of American Lands Council. He sponsored HB148, the Transfer of Public Lands Act, and is building a coalition to spread the knowledge that statehood promises to transfer title to public lands are the same east and west of Colorado. “It’s been done before and it’s the only solution big enough.” For information or to offer support, go to www.AmericanLandsCouncil.org.