“64 federal felony charges were beaten in court. These were alleged crimes we were completely innocent of.”

Edward Snook and Michael Minns individually took on the Federal Government’s IRS and were massively victorious for James and Pamela Moran.

The Morans went from having been convicted of 64 felony IRS tax crimes, to having their conviction overturned on appeal, to then once again standing trial on the same 64 federal tax crimes. What did they do that had the government so hot to get them? They literally just made some investments. Apparently that was enough for the federal government to seek their imprisonment – even taking their personal possessions.

Minns, who has a virtually unblemished reputation defending innocent victims of the federal tax police, fought in the courtroom. Simultaneously, Edward Snook and the US~Observer investigated the case and came up with important information. The combination of efforts created the perfect pairing, and the Morans were victorious.
From the article “64 Felony charges Beaten“:

Last Christmas, the spirit of the season bestowed upon a Montrose, Colorado couple the greatest gift of all, freedom! James and Pamela Moran, facing a possible 180 combined years of incarceration were found not guilty by a jury of their peers on all 64 charges of an indictment in a Federal Courtroom. This victory defied all odds because the Moran’s were convicted of the same charges in December of 2004. The Ninth Circuit Court of Appeals overturned the Moran’s 2004 convictions, granting them the new trial.

The Morans are free because of Michael Minns and Edward Snook.

By the way, they even got their property back. 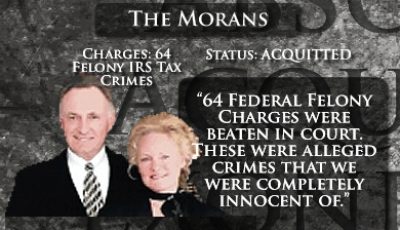