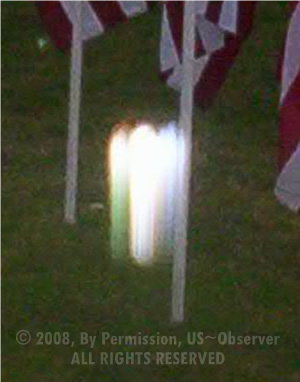 Grants Pass, OR – For more than 6 days, and over the Veteran’s Day holiday, one-thousand American flags flew and fluttered in the breeze at Riverside Park in downtown Grants Pass as a tribute to all of those who have served this great country. The tribute was brought to the community by the VietNam Veteran’s Association and was sponsored by many local companies and organizations. One such group was Shadow Fox, a local not-for-profit airsoft team, who provided 24-hour security for the event. Dressed in their team’s uniform (ACU), meant to match and honor the armed services, they stood guard through bitterly cold weather and torrential rain. They did this because they believe that service to this country, whether it’s in the armed services or in any form, should be honored. It was because of this that Neal Scherer and Michelle Gray showed up to take their posts on the evening of Saturday, November 8, 2008.
For Michelle Gray, the tribute had intense meaning. Her father, a former VietNam Veteran, had died four years earlier. When she arrived she was overtaken by the spectacle of so many flags. Thinking of her father she went toward the flags and knelt in prayer, prior to starting her shift. Later, she would recall feeling as if her father was there with her; that she was being watched-over. Neal, her fiancé stepped forward and took a picture just after Gray had gotten up and they headed toward their posts.

According to Scherer, three days had passed before he even looked at the photos on the small screen of his digital camera. On the photo taken just after Gray had said her prayer, he noticed some kind of white light. Zooming in, he saw that the shape was that of an Angel. He called Gray over to look at the image and instantly she knew, she felt and believed, that it was an image of her father in some sort of angelic form. But, they set about to explain the picture anyway.
Scherer explained that the picture had been taken at dusk and that he hadn’t used a flash, which people who were there during the capturing of the image have verified. Even still, he took a picture of a window with his flash on to see the difference between a flash reflection and that of the “Angel”. They were completely different, but still he wanted to find some sort of rational explanation.
As a member of Shadow Fox and an investigative journalist with US~Observer, I welcomed the opportunity when Scherer and Gray approached me to look at this image and try to debunk it, or prove it in some way. I immediately asked for the original memory card from the camera, which they provided. What I saw when I opened the file was a unique looking artifact on the picture. It appeared to be a picture of, what I can only explain as that of, an Angel, but I noticed other objects as well. It became clear that these other artifacts were raindrops that had fallen onto the lens of the camera, which were refracting ambient light, and perhaps the light reflected from the goggles on the monument in front of the flags. That light was from a lit gazebo-tent, used as the food station for Shadow Fox, which was directly behind Scherer when he had taken the photo. Also, there were other images that I recovered from the same card, pictures just before and after the “Angel” photo. While the photo just after the “Angel” picture did indeed have raindrops on the lens, there was no image – or smudge, for that matter – in the area where the “Angel” had appeared.

That got me thinking. So what if it is some random play on light?! So what if it could be explained away as a raindrop or smudge?! Such determinations are skeptical and inconclusive, not to mention speculative. There is nothing that can disprove that this picture is indeed that which people see … an Angel. Basically, it comes down to this … How would an Angel make its presence known? Would it be some random encounter with only one individual as a witness, or would it take shape in some photo with the help of probable causes?
With times being that which they are, I personally feel that people need to believe, perhaps more than ever, and just maybe the photo is whatever you see it as being; whatever you believe it to be. How wonderful it would be if we all saw an Angel and felt a loving presence, just like Michelle Gray, who, to this day, believes it was her father watching over her.
Editor’s Note: Whatever your belief, we hope that you will send us a note with your thoughts, and pass this around for others’ opinions. It is our hope, here at US~Observer, that you have a joyous Christmas and that this new year brings each of you the best in all your endeavors.

Estate Looting of the Rich and Famous