Pursued by Medford Police? An Unwarranted Situation Faced by the Libby Brothers

Medford, Oregon – After a good turn of recent events for the brothers and owners of Jackson County Security, Don and Jason Libby, a new twist occurs in their case, causing concern for themselves and their company.
On February 24, 2011, Donald Libby’s security license was reinstated following his suspension by the Oregon Department of Public Safety and Standards Training (DPSST) in early February, 2011. The suspension was originally instated pending the outcome of his false, impersonating a peace officer felony citation by Medford Police Department (MPD) Officers, Sgt. Ianieri and Officer Reimer on January 23, 2010.
After further review of DPSST’s own regulations, it was apparent that Don was within his rights to retain his license, since he was never formally charged; only cited.
On March 21, 2011, Don Libby was informed that his felony citation was dropped, after Jackson County District Attorney Mark Huddleston reviewed the felony citation – rightfully deciding not to pursue charges.
What was apparently a divisive attack on the Libby’s by a few MPD officers became even more apparent when our story made headlines in February. The amount of support from Jackson County residents coupled with an in-depth investigation left only one question in this writer’s opinion – how bad does it get with the Medford Police Department?
Being a strong advocate of local public safety myself, I’ve noticed there is often the concern about police abusing their authority while talking to local residents of Southern Oregon, and the Libby’s story makes those concerns a reality for all who are law-abiding – especially as the reported “abusive” MPD Officer list increases.
“We’ll be more than happy to issue you a refund”
During the 57th annual Pear Blossom Parade in Jackson County last year, the Libby’s were asked to perform security for the event. They reportedly accepted, ensuring a safe and fun parade for Jackson County residents. Security for the event was reportedly “donated” by the Libby’s, in an effort to help their community.
Don stated: “It was Jackson County Security’s way of giving back to our community, which we are proud to be a part of.”
Approaching the 2011 Pair Blossom Parade, Don and Jason Libby never received a return invite to provide security, so they decided to attend the parade as customers, and submitted their application to attend the event.
Shortly after the application was submitted, Don received notice that the application was “approved” and Darcey Mann-Self, President of the Pair Blossom Parade stated that she was excited to have them. She also reportedly stated that she knew their father very well and their uncle was her teacher long ago. She was reportedly so excited to have Jackson County Security as part of the Parade; she informed Don that the $100.00 entry fee would cost only $50.00 for Jackson County Security.
Excited to be part of the Parade, Don and Jason spent hundreds of dollars on banners and other supplies for Jackson County Security in preparation for the event.
Don reportedly received a phone call weeks later from Darcey, wherein she explained to him, “the board wanted to inform Jackson County Security they weren’t allowed to carry their weapons, since they weren’t sworn police officers.” Don stated, “A totally different tone was coming from Darcey during this phone call than previous ones.” She told Don, “if we weren’t okay with leaving our weapons behind that she would be fine with cancelling our acceptance into the parade and would issue us a refund.” Don said he told Darcey that there was no need to cancel their acceptance, nor issue a refund, and that if Jackson County Security decided to withdraw from the Parade, he would contact her.
Pear Blossom Parade and MPD Officers
Two reported Pair Blossom Festival Board Members are MPD Officers, Greg Nichols and Officer Schweizer. Given the recent issues between Jackson County Security and MPD, could the change in Darcey’s tone be caused by MPD officers? How come Jackson County Security was “asked” to perform security last year, weapons included – and not asked, or allowed to carry their weapons, which they are licensed to carry in this year’s parade?
On April 2, 2011, Don received mail confirmation that Jackson County Security had been “taken out of the parade” and a refund was issued – after Don told Darcey he would contact her if Jackson County Security decided to withdraw from the parade. Given the reported change in tone by Darcey since her previous conversations with Don, could MPD’s harassment against the Libby’s be continuing through the Pair Blossom Festival Board President and fellow board members, and also MPD Officers?
Editors Note: Public support has inundated us with pertinent information regarding this case, and we hope it continues! The Libby’s have sent a notice of intent to sue MPD, and the information received thus far has helped them tremendously. It was also reported that Pear Blossom Festival President, Darcey Mann-Self reinstated Jackson County Security’s Application to be in the parade which took place on Saturday April 9, 2011. A phone call to Darcey Mann-Self was made with no return call.
Previous Story 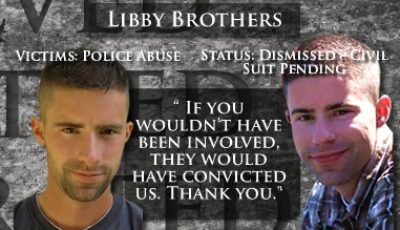