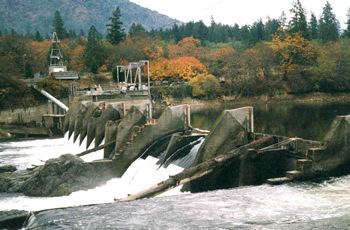 Oregon’s congressional delegation needs to get with the program in these financially trying times. With funding in short supply across the board why spend millions removing a dam that could make millions?

US Army Corps of Engineers – Lost Creek Operation Manager Jim Buck releases water through the power house at Lost Creek as needed for flood control, agriculture, fish, municipal cities and industries. The power house produces 500 c.f.s. to a maximum 2400 c.f.s. The powerhouse has (2) 25 mega watt generators for a total of 50 mega watts which produce from 5-9 million annually.

Bonneville Power Administration (BPA) handles marketing sales and gives back enough dollars for operation of Lost Creek Dam, plus upkeep of the dam. Lost Creek Dam stores water in the rainy season and flood times to be released later for all users of the river.

Savage Rapids Dam has an 800 c.f.s. hydro permit and if ran continuously it could possibly out-produce Lost Creek Dam. Maybe 10 million or more. All citizens should help the Grants Pass Irrigation District to help carry our tax loads like Douglas County does from the Galesville Dam located on Cow Creek.

Do you want to fight for that kind of money or just let it go to waste, unused down the Rogue River like the Biscuit Fire’s rotting timber. Is there any American team left? Please let us know.