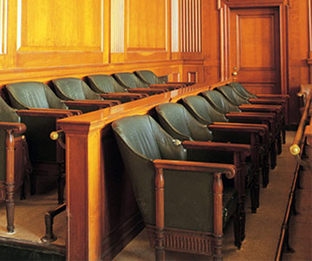 Jury nullification, in which jurors refuse to convict defendants under laws they find objectionable or inappropriately applied, is a favored tactic of many libertarians who, rightly or wrongly perceive individual liberty as, at best, a minority taste among their neighbors. They like the idea of a tool that can be wielded on the spot to shield people from powerful control freaks without first having to win a popularity contest. But nullification is useful only if people know about it. New Hampshire’s governor signed a law requiring the state’s judges to permit defense attorneys to inform jurors of their right to nullify the law. –J.D. Tuccille, Reason.com
Before one is able to understand why jury nullification is a good idea, one must understand the importance of a trial by jury. Our Founding Fathers universally considered them to be a powerful weapon in the war against tyranny.
Thomas Jefferson wrote, “I consider trial by jury as the only anchor yet imagined by man, by which a government can be held to the principles of its constitution.”

“A right of accused. In all criminal proceedings the court shall permit the defense to inform the jury of its right to judge the facts and the application of the law in relation to the facts in controversy.”
Short, simple and to the point. Nullification advocate Tim Lynch of the Cato Institute thinks it may not be a game changer, but it’s a step in the right direction. Lynch says:
“This is definitely a step forward for advocates of jury trial. Allowing counsel to speak directly to the jury about this subject is something that is not allowed in all the courthouses outside of New Hampshire–so, again, this is good. I am concerned, however, that this language does not go far enough. We don’t know how much pressure trial judges will exert on defense counsel. As noted above, if the attorney’s argument is ‘too strenuous,’ the judge may reprimand the attorney in some way or deliver his own strenuous instruction about how the jurors must ultimately accept the law as described by the court, not the defense. I’m also afraid what the jurors hear will too often depend on the particular judge and, then, what that judge wants to do in a particular case.”
As an advocate for victims who are falsely charged with crimes they did not commit, the US~Observer has witnessed many cases where not only the law should be questioned, but more importantly, the government agencies involved in charging the accused. The idea the government says there has been a crime committed and we are going to prosecute should be highly questioned by every jury, regardless of the state or county that prosecutes.
Back in 1999, the Washington Post wrote:

“In courthouses across the country, an unprecedented level of juror activism is taking hold, ignited by a movement of people who are turning their back on the evidence they hear at trial and instead using the jury box as a bold form of civil protest…
“The most concrete sign of the trend is the sharp jump in the percentage of trials that end in hung juries. For decades, a 5 percent hung jury rate was considered the norm, derived from a landmark study of the American jury by Harry Kalven Jr. and Hans Zeisel published 30 years ago. In recent years, however, that figure has doubled and quadrupled, depending on location.”
That article featured a pre-gun-running Eric Holder objecting that, “There is a real potential danger if this problem (Nullification) goes unchecked.”
Former California Prosecutor Nathan Wente, now Defense Lawyer, stated he has personally witnessed a judge during jury selection ask potential jurors if they believe in Jury Nullification, so they could be excused from jury selection if they said yes.
Wente further stated, “A politician who would be so bold to do this suggests there is enough support from his constituency, and more intriguing is that there are enough people who understand the importance of it. This is truly a breathe of fresh air.”
Paula Hannaford-Agor, of the National Center for State Courts, and Valerie P. Hans, of Cornell Law School, penned a 2003 paper published in the Chicago-Kent Law Review that said:
“The criminal justice community has become increasingly concerned about the policy implications of jury nullification, especially as jury nullification manifests itself in hung juries. A number of communities, especially in California, report that up to one-quarter of all criminal jury trials routinely result in mistrials due to jury deadlock.”

Jury nullification can be traced back to one of the first substantial Supreme Court cases in 1794 – Georgia vs. Brailsford (3 Dall 1). The instructions to the jury illustrated the true power of the jury. Chief Justice John Jay said, “It is presumed, that juries are the best judges of facts; it is, on the other hand, presumed that courts are the best judges of law. But still both objects are within your power of decision …you have a right to take it upon yourselves to judge of both, and to determine the law as well as the fact in controversy.”
As recent as 1972, the U.S. Court of Appeals for the District of Columbia said that the jury has an “unreviewable and irreversible power… to acquit in disregard of the instructions on the law given by the trial judge (US vs Dougherty).”
Jury nullification is something very few know of today. It is also becoming more common to see hung jury verdicts according to experts. In New Hampshire, let’s hope that jurors will start a trend of what juries should already be doing, now that it’s officially “Okay”.
Editor’s Note: Most U.S. citizens have obviously failed to realize that New Hampshire, or any other state shouldn’t have to pass a nullification law. Nullification has been lawful since our country’s founding. It’s our own citizens who have allowed Judges and Prosecutors to deceive the jury of this essential tool that gives us the power to STOP TYRANNY.
Over the years, the US~Observer has sought to inform the public about Jury Nullification. It is one of the primary components to keeping a free society. Without Jury Nullification the courts are allowed to railroad anyone. It’s no wonder they try to hide it from jurors. You can read our past articles on Jury Nullification at www.usobserver.com.