On April 20, 2020 The U.S. Supreme Court ruled that non-unanimous jury verdicts must now be unanimous in state courts. This means every juror that sits on the jury must find the defendant guilty, not just most of them. Oregon was the last state to allow this type of verdict in all criminal cases –   with one exception for felony murder cases, which required a unanimous verdict. Louisiana, the only other state that had allowed non-unanimous verdicts changed course in 2018 when voters overturned the law, requiring unanimous verdicts in felony cases.

The Supreme Court decision read, “…it may be argued that today’s decision does not impose a new rule but instead merely recognizes what the correct rule has been for many years.” The obvious question many are now asking is; “What about the cases of those who have already been convicted by a non-unanimous jury?”

John Simerman, a Staff writer for NOLA said it best: “As expected, the Supreme Court left for the future the question of retro activity, and whether this was the kind of ‘watershed’ ruling that warrants do-overs for anyone convicted by a split jury, ever. That means split-jury convictions will remain intact, at least for now, for more than 1,000 inmates in Louisiana, in addition to perhaps hundreds in Oregon.”

In the 6-3 Supreme Court decision, the high court ruled that the Sixth Amendment’s right to a jury trial requires a unanimous verdict. Part of the ruling also meant that the need for jury consensus in federal courtrooms applies equally to state courts through the 14th Amendment. 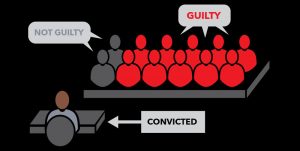 Oregon and Louisiana now have a huge debt to society. At very least, these states should allow those previously convicted under these unjust rules, a chance to try their case again. Rather than pursue justice, prosecutors and their ilk are expected to argue that revisiting the cases of those convicted by a split jury will overburden the court. That should not matter. Justice should matter. Nonetheless, legal experts believe government will fight to maintain standing convictions. For now, hundreds, if not thousands of future convictions have been curbed.

The US~Observer believes that a unanimous verdict is, and should have always been, the only means by which a person should ever be convicted. What is unconstitutional today, was always unconstitutional. Today’s ruling is a huge win for U.S. Citizens.

The US~Observer is a national newspaper that helps prevent and overturn wrongful convictions.

If you or someone you know has been wrongfully charged or convicted, please contact the US~Observer today! Email: editor@usobserver.com, or call 541-474-7885. Click here for samples of our vindicated clients.