In an era where poor policing is exposed daily, here’s a story of one police officer that will touch your heartstrings. Officer Jody Thompson may just be the best police officer you’ve ever read about! 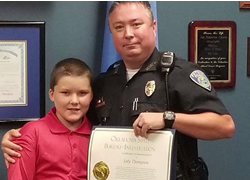 The best police officer with his now 10-year-old son.

Poteau, OK. – Back in 2015, Officer Jody Thompson was pulling into the police station when a call of child abuse was received. Although his shift was ending, Officer Thompson responded with other on-duty police. Once Officer Thompson arrived on scene, a young 8-year-old boy was located.  The abuse was horrific. Officer Thompson ended up doing more than just saving this young boy from abuse, he would eventually adopt him.

According to Fox 59, Poteau Police Chief Stephen Fruen explained, “Based on some of the case facts, when we found him (boy) he was bound by his hands and feet with rope and had been submerged in a trash can, held in the shower,” Fruen said. “They weren’t feeding him. He didn’t have much to eat. I think what he did get to eat he got at school. Bruises, he was covered in bruises from head to toe.

Having previously handled dozens of abuse cases, Officer Thompson immediately transported the young boy to the hospital where he stayed by the child’s side as he laid recovering in intensive care.
“He means everything in the world that we live in. He’s the strongest person I’ve ever met. He means the world… And the rest is kind of history,” Thompson stated.
“When I seen him in that house…I knew,” Thompson said. Officer Thompson “knew”, and eventually adopted the now 10-year-old boy. 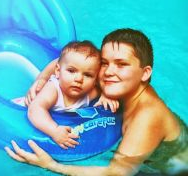 The boy with his biological sister.

This story took another dramatic turn when the boy’s biological mother gave birth to his sister while she was in jail. Wanting to keep the siblings together, Officer Thompson adopted the young girl, too. “She was barely 24 hours old and we brought her home,” said Officer Thompson.
The young boy is now excelling in school with straight A’s.  He was also part of the gifted and talented program during the school year.
“All of us can sit back and say we would do the same in that situation, but to come through with it and to do that, that’s a measure of a man – and a very good police officer,” Fruen said.
The US~Observer would like to thank Officer Jody Thompson. We believe he may just be the best police officer to ever put on a badge. We see on social media that some cops flat-out abuse their power, some causing unwarranted deaths of innocent people. What Officer Jody Thompson did is a strong reminder that truly compassionate police do exist, and we hope to see more stories like Officer Thompson’s. Aside from possibly being the best police officer ever, Officer Thompson has lead by example. Leading by example is something dearly needed to be seen by the public he serves.
Officer Thompson – you’re the best. Thank you for your service.

Public Records Requests (FOIA) Can Now Get You Sued