Is it treason and who will stop it?

“I am concerned for the security of our great nation, not so much because of any threat from without, but because of the insidious forces working from within.”
– General Douglas MacArthur 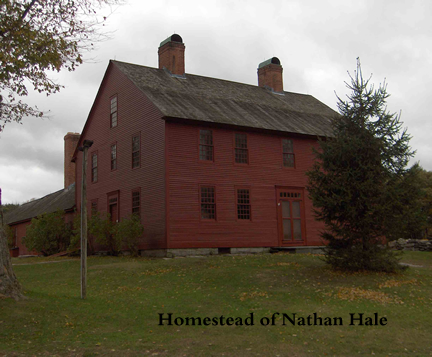 On May 15, 2008, I stood at the homestead of Nathan Hale outside Mansfield, Connecticut.
Nathan Hale was born in nearby Coventry. These are very old towns. Mansfield was established in 1702 and Coventry incorporated in 1712. Because of my work, I have had the honor of standing where Patrick Henry, Thomas Jefferson, James Madison, Andrew Jackson, George Washington, Nathan Hale and many others lived, walked and fought for our freedom. They had a fire in their belly and despite overwhelming odds, they remained steadfast in their mission.
Nathan Hale was hanged by the British at the age of 21. Before he was hanged, young master Hale said, “I only regret that I have but one life to lose for my country.”
My trip to Connecticut was not for fun or vacation, it was a working trip to the Thomas J. Dodd Research Center at the University of Connecticut. As I was standing at Nathan Hale’s homestead in the peaceful, beautiful surrounding, my heart was indeed heavy. Only the night before at my hotel in Hartford, CT, while checking email on the hotel’s computer, three men were standing directly behind where I was sitting. They were having a beer after a hard day. All three were dressed in suits; the younger male appeared to be about 45, the two other men were likely 60-65. They were lamenting about the difficulty in choosing between Clinton and Obama because they were so close on the issues, it came down to personalities. One piped up with the suggestion that should Marxist Hillary Clinton become president, she should make her slutty husband Secretary of State.

As I listened to this exchange, it was all I could do not to turn around and make a comment. I didn’t because my words would have fallen on deaf ears. They were die hard Democrats who willfully believe lies out of ignorance and blind party loyalty. I’m not going to say they’re stupid because they appear to be individuals who do have jobs. I will say they are like tens of millions who have no idea or understanding of who Obama and Clinton are and their true political ideology: communism. They have been shoveling the communitarian philosophy down the throats of uninformed Americans for decades.

DARE WE CALL IT TREASON?

Treason is defined as giving aid and comfort to the enemy in a time of war. “The offense of attempting by overt acts to overthrow the government of the state to which the offender owes allegiance; or of betraying the state into the hands of a foreign power.” What else do we call a detailed plan to merge America with Canada and Mexico as part of regional government under a “one world government”? What else do we call agendas being implemented, via treaties and agreements, that totally erase the sovereignty of this country and replace our constitutional republic with communism? What do we call the actions of Congress after Congress for decades, with the blessing of president after president, who continue to dismantle the U.S. Constitution and Bill of Rights?
The picture is ugly. I was thinking about being at Nathan Hale’s homestead again the other day. We are now even far further down the road to destruction, my fellow Americans.
It’s now summer-time when Americans go play. There is no time for fun in the sun, dirt biking or staying embedded on the couch every weekend watching sports. We are in such deep trouble as a free nation, every minute counts in getting our fellow Americans educated and activated. Most Americans do not see the danger because the plan has been done incrementally and quietly for the most part. The American people continue to be distracted with meaningless noise on cable networks like FOX, CNN and MSNBC who, night after night, serve up the same regurgitated politics while the evil doers never rest. Turn off gas bag party hacks like Rush, Hannity, Laura Ingraham and others. Americans are walking into the trap with their eyes wide open because they don’t have the facts. We must continue to reach out to them with the truth and constitutional solutions.
Most of the foundation pieces are in place for world government. Much has been written about the North American Union (NAU) and the SPP (Security and Prosperity Partnership) over the past several years. Exposing that treason has to some degree caused a step back or two by the planners, but the destroyers march on because the American people are blind to the evil standing right at their door step.

THE DEMISE OF OUR UNIQUE AMERICAN IDENTITY

Who is going to stop this plan to destroy these united States of America? Not Congress. With the exception of a few, most are nothing more than Band Aid pushers and puppets. Many are believers in world government, as are high ranking military officers. Change will not come with the same players who have been fulfilling the plans of the global monsters the entire time they’ve been in office. Not Obama, who is one of their minions. Not Hillary Clinton, because she is one of their lackeys. Not Romney, because he doesn’t even understand the U.S. Constitution and the constitutional role of a president. It has been reported Romney attended the recent Bilderberg conference; the yearly get together of global elites who own our politicians. A very bad sign.
We no longer have a Department of Justice. It is totally compromised, as anyone with clear thinking and a grasp of what’s been happening for decades has seen. It has to be we the people by rejecting the plan for totalitarian government. Have you taken a stand to get rid of elected public officials at all levels who are committed to world government via Agenda 21 and support of the communist UN? Dedicated Americans in the State of Alabama have succeeded in stopping Agenda 21 in their state:
“Alabama became the first state to adopt a tough law protecting private property and due process by prohibiting any government involvement with or participation in a controversial United Nations scheme known as Agenda 21. Activists from across the political spectrum celebrated the measure’s approval as a significant victory against the UN “sustainability” plot, expressing hope that similar sovereignty-preserving measures would be adopted in other states as the nationwide battle heats up.
“The Alabama Senate Bill (SB) 477 legislation, known unofficially among some supporters as the “Due Process for Property Rights” Act, was approved unanimously by both the state House and Senate. After hesitating for a few days, late last month Republican Governor Robert Bentley finally signed into law the wildly popular measure — but only after heavy pressure from activists forced his hand.
“Virtually no mention of the law was made in the establishment press. But analysts said the measure was likely the strongest protection against the UN scheme passed anywhere in America so far. The law, aimed at protecting private property rights, specifically prevents all state agencies and local governments in Alabama from participating in the global scheme in any way.
“The State of Alabama and all political subdivisions may not adopt or implement policy recommendations that deliberately or inadvertently infringe or restrict private property rights without due process, as may be required by policy recommendations originating in, or traceable to ‘Agenda 21,’ ” the law states, adding a brief background on the UN plan hatched at the 1992 “Earth Summit” in Rio de Janeiro.
“The people of Alabama acting through their elected representatives — not UN bureaucrats — have the authority to develop the state’s environmental and development policies, the official synopsis of the law explains. Therefore, infringements on the property rights of citizens linked to “any other international law or ancillary plan of action that contravenes the Constitution of the United States or the Constitution of the State of Alabama” are also prohibited under the new measure.
“Of course, as the law points out, the UN has enlisted a broad array of non-governmental and inter-governmental organizations in its effort to foist Agenda 21 on the world — most notably a Germany-based group called ICLEI, formerly known as the International Council of Local Environmental Initiatives. But the new measure takes direct aim at that problem, too: “the State of Alabama and all political subdivisions may not enter into any agreement, expend any sum of money, or receive funds contracting services, or giving financial aid to or from” any such entities, as defined in Agenda 21 documents.” – The New American Magazine, June 4, 2012.
How shameful a Republican governor only signed the bill into law after massive heat was put on him. However, it is a huge victory for the people of Alabama and what is potentially a death blow to the globalists seeking to destroy the sovereignty of these united States of America. We can make this happen in the other 49 states, but it takes boots on the ground.
Do you have the courage of Nathan Hale or Patrick Henry by reaching out to one more American who does want the truth and wants to know how to get involved – even while being labeled “fringe” or “extremist” by the controlled media? Are you prepared to be tracked with the Nazi-style “National ID” or will you say no? Are you prepared to sit back and allow this tyrannical government spy on your phone conversations, email and now drones flying over our homes under the guise of the phony “war on terrorism”?
What is it you want for your children? For them to be tracked by their DNA and turned into global citizens via brain washing in the government’s indoctrination centers they call public schools? Are you willing to live your life on your knees under permitted zones of “free specch” or true freedom and liberty given to us from battle fields run red with the blood of patriots?
If your answer is no, then get busy. Become part of the peaceful revolution underway to take back America for we the people, not career politicians and special interest groups. All bills to be introduced in the 2013 sessions for state legislatures have to be written by Thanksgiving, early December at the latest. That means you begin hammering on your state representative and senator now, not in October. Contact a local Tea Party or 9/12 chapter and get involved. If your incumbent in the state capitol refuses to step up to the plate, throw him/her out in November. The states created the General Government and they have the power to stop a totalitarian take over.
We are on the cliff. Our future is in our hands.

“Dan Scott. Barely a week ago I heard you rail for two hours about independence. Mr. Hardwick, how many times have I heard you speak of freedom at my father’s table? Half the men in this church, including you father, and you, Reverend, are as ardent patriots as I. Will you now, when you are needed most, stop at only words? Is that the sort of men you are? I ask only that you act upon the beliefs of which you have so strongly spoken
and in which you so strongly believe.”
– 17 year old Ann, from Mel Gibson’s movie, The Patriot

Has America Lost It's Greatness?