What does Citizenship mean to you?

By Ron Lee
Verbal Assassin
It used to be that if you wanted something done, you’d do it. If a man or a woman saw a need, they’d fill it. If someone needed help, you’d give it. You did these things not because you were paid to do it or it was expected in some way but rather because it needed to be done. “If not by you then by who,” was the mantra. There was no want for praise or money, doing whatever it was, was enough of an accomplishment to garner a modicum of self fulfillment, self worth and aided in the development of self respect. Because of this mentality things got done, needs were met and help given and our country was great, but we live in a new America now.
Today’s America is filled with those who want things done and refuse to work for it. They see needs and require someone else to provide it. They see people in need of assistance and don’t want to be bothered or are too afraid to give it. They yell and scream that others are doing things, believing things, saying things the wrong way, all the while with an nihilistic heart turning a deaf ear and blind eye to their fellow human. And they firmly believe that our world would be better if everyone were just … equal. But their definition of equality begins with monetary wealth and ends with their ideas, selves and causes being held in higher regard than those of whom they disagree.
I was recently on my way home from my office. I was following behind the normal fair of drivers who believe it is their right to drive in a passing lane whilst travelling 10 mph below the posted speed limit – I’ll admit to my fair share of contained explosive outbursts from behind the wheel as I try to no avail to use the lane as intended. Ahead of me there was an ocean of brake lights, traffic had stalled more than normal. For the next several minutes we inched our way forward until the obstruction was revealed. A young woman’s Bronco II had broken down in the “slow” lane. She was sitting behind her wheel paralyzed as drivers went around her on both sides. I immediately pulled off the road, without even thinking about it. Trying to cross the fast lane was dangerous! People didn’t care that I was trying to walk in front of them, they just wanted to get where they were going and I was almost struck several times. When I finally reached her car she seemed relieved someone was there.
“You need a push?” I asked. She smiled. So, I started pushing. But the people in the cars behind her in her lane couldn’t be bothered to wait as we angled toward the edge of the road, they passed her on the shoulder side almost hitting her (us), but we finally made it. She waved a thank you and I headed off to make my way across the highway. It was no easy task as the people just didn’t want to stop.
The lesson I learned was, people would rather be inconvenienced by waiting in the safety of their own lives as long as someone else handles whatever crises may arise. 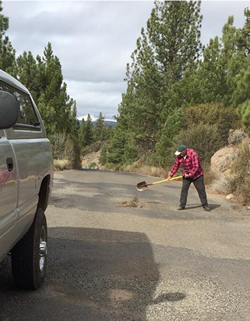 But it’s not even that, simple civics isn’t even considered today.
People bemoan our infrastructure, GMOs, even global warming, but other than wanting government to intervene I see few who complain about these things stepping up to personally do anything about it.
Recently, my mother sent me a text with a picture of my dad filling a “pothole” (more like a crater) on a California road in the Plumas National Forest. He didn’t have to. It’s not his job, but he just didn’t want to drive over it and didn’t think anyone else should either. So he did something. As he was shoveling, a Forestry Department Truck drove by him without so much as even a wave from its occupant. Later, when my folks caught up to the ranger in the small town of Chillcoot, CA they asked him about the pothole. His reply, “I don’t work on the road crew.”
Government will never be the answer. We alone are the answer. Each of us. It is our duty as citizens to act, not simply hold our hands out and think equality will be given.
Like the man who spoke these words, this is my oath of citizenship, “Ask not what your country can do for you; ask what you can do for your country.” Thank you John F. Kennedy, there have been no truer words spoken.
And to my father, thank you for showing me what it means to be a real American.
Previous Story