Where is Sean Valdez? 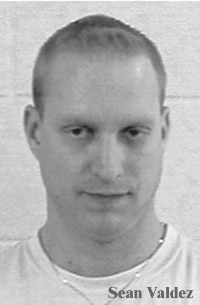 Grants Pass, OR – Sean Valdez is that ex-deputy sheriff for Josephine County who, back in March, abused his 19 year old girlfriend in front of his own children. Having been protected by his law enforcement brethren, felony charges never surfaced and much evidence in the case disappeared. The case was transferred to Jackson County and their District Attorney and presiding Judge decided he needed to serve time in the form of probation and go through a Diversion program – to be enforced in Josephine County. He was to have no contact with the victim and was to remain a law abiding citizen.

In April, while on his diversion program, which ordered that he obey all laws, not drink alcohol, etc., the ex-deputy ran into his neighbors home with his car and then fled the scene. It was determined by the officer on the scene that Valdez had been drinking, but amazingly there is no record of any DUII charges or felony hit and run. Instead, he was cited with “Failure to perform duties while driving.” This citation, however, broke the rules of the diversion program and his involvement in the program was terminated on May 24th and now he is set for a status hearing to determine what happens next.

Now where is he and what is
the status of his upcoming hearing?

On some occasions he can be found at Shiki’s Sushi restaurant where he enjoys the company of the same girl, who just months earlier he had choked in front of his children. The same girl he was to have no contact with. Actually, just after receiving his “slap on the wrist diversion” Sean Valdez took her on a cruise to Mexico where he proposed. While she is no longer his fiancee, he still goes in to talk, mingle, and generally have contact with her.

Why hasn’t Sean Valdez’s Parole Officer (PO) done something about his violations? The answer is simple, he doesn’t have one. The Josephine County Community Justice’s (probation department) Marie Hill stated in a phone interview, “he is not under probation with us.” She went on to say that they don’t receive a case until it is sent by the court to them. But this is in fact what happened when the Jackson County Court ruled that he was to be on probation and it fell back to the jurisdiction of Josephine County to administer the ruling.

No matter how you look at it, it reads like a bad day-time drama. You have an ex-deputy who has recently behaved more like those he once arrested, and you have the system he once operated in conveniently shuffling his case into limbo – hoping everyone will forget, or at least get so confused they want to forget. Welcome to the Josephine County reality show “Playing Stupid.” One has to wonder if they remember that “stupid is as stupid does.”