Club 71 The Place to go for a DUII

Sunny Valley, OR – The weekend of the Vagos biker gang rally in Grants Pass, OR found a drastic increase in police to combat the threat of this organization.

With close to 200 officers and almost as many bikers during the weekend, the police were able to shadow every movement of the members of this “outlaw gang” and on Saturday June 4th they led the police to Club 71. Some twenty, or so, members filed into the Club 71 parking lot in taxis, and in one case an RV, only to be met by as many Oregon State Police Officers and undercover agents of unknown affiliation. The Vagos made their way into the only Josephine County strip club and according to many there, “didn’t have that great of a time.”

Obviously this was due in part to the strong police presence as well as that of the Sunny Valley Action Group protesting the club. According to several of the protestors owner Larry Lacey would come out and tell them, “You know those Vagos guys are talkin’ a lot of trash about you.” And he would get frustrated when the protesters wouldn’t react to his taunts.

“One thing the Vagos Rally did was call the attention of the club (71) to the Oregon State Police who have jurisdiction over Oregon’s Highways,” said one protestor who wanted to remain anonymous.

According to many this is going to heighten patrols along the highway near Club 71 in hopes to curb the amount of drunken drivers coming out of the club, and the US~Observer has learned that there will, in fact, be a concerted effort to enforce the Oregon State drinking and driving laws in that area.

According to Jerry Franklin, one of the Sunny Valley residents who is protesting, “Had this upcoming effort been put in place prior to April 22nd, perhaps no one would have gotten hurt in that horrible accident which involved one of Club 71’s dancer’s husband and an intoxicated club patron, both of whom were transported to the hospital for their injuries.”

The US~Observer has credible information that both involved parties plan to file suit against Club 71 for the over-serving of Timothy Little, the driver who had been drinking at the establishment prior to the accident.

With the effort to curb drinking and driving in the area, if you don’t want a DUII you shouldn’t drink then drive from Club 71. Or as one of the protestors stated, “Just don’t go to Club 71 at all.” 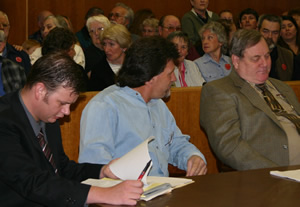 Richard Larry Lacey, owner of Club 71, and counsel during a hearing.

Editor’s Note: We have recently received information that Club 71 owner Richard Larry Lacey will be facing charges of Reckless Endangerment. One evening as Lacey was driving his vehicle past the protestors that gather in front of his establishment, he swerved toward several of them , knocking a sign out of one man’s hands and frightening several.