Multnomah County, OR – In May 2005, we published an article titled “No Due Process! DHS Incompetence, Lies and Abuse?” The article (view at usobserver.com) laid out an overview of how Oregon’s Department of Human Services (DHS) literally stole Shannon Harding’s young children, Tate and Kahleah from her. 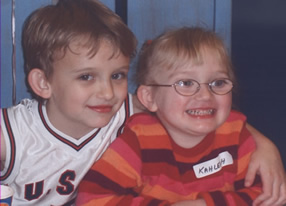 In March of 2004, Kahleah broke her femur bone (most likely by getting it caught in the frame of her bunk bed) and because there were no witnesses DHS entered the picture and assumed that there was abuse even though Shannon rushed her to the hospital upon discovering the injury. To this very day Kahleah states she doesn’t know how it got broke, even after much professional coaching. An investigation into this case, the family and the extended family shows abuse to be highly unlikely if not impossible. However, DHS doesn’t proceed in a legal manner, they steal the children without any investigation and then they attempt to build a manufactured case. They simply snatch the children and it’s up to the parent to prove their innocence and even when innocence is proven it is often ignored. In this instance no legal case was brought, the mother proved her innocence via a forced lie detector test and her children were taken anyway by extremely corrupted people, who are protected by misguided and completely controlled “law enforcement officers” wearing badges and carrying guns.

Shannon’s children unfortunately have different fathers and while her choice of men leaves much to be desired, her parenting skills and devotion to her children were admirable and obvious to all who know her. It should be noted that Shannon didn’t stay with these undesirable fathers and she has supported her beloved children 100%, on her own, while they resided with her and before they were stolen! How in the world has our society degraded itself to the position where an accident can occur, an unfounded accusation be made and the subject of the accusation is then sentenced without ever having her day in court. Without the existence of any criminal charges or even proof of wrongdoing a mother loses her children to the state and then is required by an agency from the pit of hell to go through parenting classes etc., with perverts, drug users and low lives if she wants her children returned.

It has been stated on several occasions by Judge David Knoefler who is presiding over this case and by DHS that neither of the children’s fathers were proving themselves to be responsible parents; DHS has even had conversations with the fathers wherein both admitted they were “ready to give up parental rights” to their children.

As soon as it was known that Truman Harding (Tate’s father) was not willing to comply with DHS’ requirements, the rest of the Harding family began pushing very hard to get Tate adopted by Matthew and Michelle Perkins who are family members in Tennessee. Truman later stated that he would sign over his parental rights on the condition that the Perkins would be adopting Tate. DHS advised him that in giving up his parental rights he was also giving up his rights to place conditions on anything regarding Tate. So what does this worthless father do; He assists his mother Darcy Harding in attempting an end-run around the system and what is best for Tate by initiating an attempt to challenge the termination of his parental rights, so the grandmother Darcy Harding could gain control of young Tate and separate him from his sister. And DHS enabled him by allowing Tate to visit Truman’s relatives in Tennessee with his grandmother Darcy Harding. This has occurred even in light of a finding by Kinship House in Portland, Oregon, that separating Tate and Kahleah would be damaging to both children. Even though DHS contracted with Kinship House to do the evaluation, now DHS is ignoring the results, according to our source. These facts alone are more than sufficient to show Judge Knoefler the truth of this case; Truman Harding is simply attempting to gain custody of Tate because of the pressure applied by his mother Darcy Harding. If successful in his attempt young Tate will most likely end up in Tennessee, Truman will continue his drug infested irresponsible life being supported by women (including his mother) he is able to con and Tate and Kahleah will suffer greatly.

Any prudent person would realize that separating a brother and sister after they have spent their entire lives bonding with each other would be devastating. It wasn’t until the Harding’s learned that the Perkins’ would not be considered as an adoptive resource that Truman made any attempts to complete the DHS required services. Information provided to the Observer shows that Truman is failing miserably at his efforts. It is crystal clear that the attempts to obtain custody of Tate is being orchestrated solely by Darcy Harding with no consideration for the best interests of eight-year-old Tate and his sister, four-year-old Kahleah.

Tate, Kahleah, and Shannon Harding in a family photo

Shannon’s children were originally placed with her exemplary parents Dave and Shirley Rowland in March of 2004, where they have been thriving ever since DHS confiscated them. Both children have been well cared for according to professionals in the areas of health, welfare, etc., so why separate the two? If it wasn’t bad enough to take the children in the first place, now DHS and according to a DHS employee, Judge Knoefler, plan on separating the two. Apparently Tate’s attorney Tawnya Stile-Johnson and CASA representative Jeff Krow have been swayed by DHS and namely caseworker Marina MacMichael. This is standard procedure as most attorneys and CASA are too busy kissing the backside of Oregon’s most corrupted agency (DHS) to do their jobs in an ethical and honest manner.

A hearing has been scheduled for July 25, 2005 at Multnomah County Juvenile Court. According to caseworker Marina MacMichael the judge and DHS are expected to drop their attempts to terminate Truman Harding’s parental rights and turn young Tate over to him. This will obviously cause irreparable harm to both children and the US~Observer promises DHS, caseworker Marina MacMichael, Darcy Harding and Truman Harding that there will be hell to pay if this occurs. Instead of destroying two young children DHS and Judge Knoefler have the chance to do what is right and return both children to their mother Shannon Harding or at least leave the children where they are at, where they have been excelling and quit interfering with their young, and innocent lives.

DHS and Judge Knoefler should do what they are being paid to do: “That which is in the best interest of the children.” The best interests are obvious and both DHS and the Judge have the same evidence that we possess. After doing what is right they should then contact law enforcement and place Brian Cooper (Kahleah’s father) and Truman Harding (Tate’s father) in jail for criminal non-support.

Further, If you are outraged that a corrupted state agency was able to steal Shannon Harding’s children in direct violation of her constitutional rights to due process and equal protection then call caseworker Marina MacMichael’s supervisor Mary Eldridge at 503-731-3336, ext: 2312 and let her know what you think of DHS’s criminal actions. Ms. Eldridge can also be reached via email at mary.eldridge@state.or.us.

Editor’s Note: In all fairness to Judge Knoefler, we realize he hasn’t made any final decision in this case and the information regarding his intent that was received by the Observer came from a DHS employee.

The Plea Bargain Prosecution of the Innocent

Club 71 The Place to go for a DUII