Josephine County, Oregon – In our last edition we published an article titled, “To Hate Bikers,” wherein we described many details regarding false charges that were filed against three motorcycle riders on October 6, 2006 (read the article for background at www.usobserver.com). Near the end of that article I stated, “Our hopes for Campbell have been that he wouldn’t follow the same practice of filing false charges as did his corrupt predecessor DA Clay Johnson, however, our hopes are fading fast…” Our hopes have now faded. 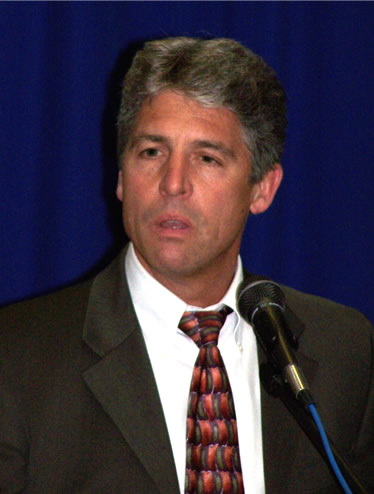 In the midst of the financial crisis facing our criminal justice system here in Josephine County due to the loss of our O&C funding, DA Campbell has exposed himself as a prosecutor void of both common sense and justice. Campbell was handed affidavits from three eye witnesses in the biker case months ago. The eyewitness testimony completely vindicates the motorcyclists of any wrongdoing just as it indicts their accusers. Campbell hasn’t even taken the time to question any of the eyewitnesses as he continues to press his false charges against Stanley Strange, Louie Pombo and Glen Seybold, all of Cave Junction, Oregon.

Give Me More Money
So I Can Prosecute More False Charges

While Campbell has been out attempting to persuade the taxpayers to give him more money during recent public meetings, he has continued to squander the tax dollars he currently has on false prosecutions. This is pure hypocrisy and without question, attempted deception against Josephine County tax payers. Campbell is like many attorneys who can’t see the “forest for the trees.” These legalistic monarchs think they are heads above those who pay them – this is unacceptable and it has to stop in Josephine County, Oregon. During my first meeting with Campbell he informed me in so many words that he thought the world of his predecessor DA Clay Johnson. When I told him point blank of some of the corruption Johnson had been involved in, he simply paid no attention. It was reported by Paul Walters of NewsWithViews.com that Campbell informed Walters he “needed to ask his permission before speaking to him.” These actions are unacceptable and this writer for one will not stand for them. Campbell also reportedly commented that he believed Durham County, North Carolina District Attorney Mike Nifong wasn’t doing anything wrong in his false prosecution of Duke University Lacrosse players who were factually, falsely charged with serious sexual assault charges. The NC State Bar has filed ethics complaints against DA Nifong and an affidavit was filed in court on Friday charging Nifong with “willful misconduct in office – a complaint that mirrors charges brought against him by the North Carolina State Bar.” There is really no difference between the Duke false prosecution and the false prosecution of bikers in this case – in the Duke case we find DNA evidence and in the “Biker” case we find eye witness testimony.

In May Josephine County voters will be asked to pass a levy to keep the justice system afloat, however, US Senator Gordon Smith has pledged to filibuster the Federal Funding Bill if the O&C money isn’t provided to Oregon counties for another year. This may or may not occur. If it does the levy would be a moot issue for the time being. It is apparent though that federal funding, even if provided for the upcoming year, will disappear in the not too distant future. This means that Josephine County taxpayers are going to be forced to step up to the plate and fund our criminal justice system. If we don’t it is highly likely that the state would step in and force excessive taxes on property owners.

Newly elected Sheriff Gil Gilbertson has already shown he intends to keep his campaign promises, much unlike the incompetent Sheriff Dave Daniel who he replaced. What a dilemma – we finally have elected a Sheriff who will do his job without squandering our tax dollars, yet we have a District Attorney who will continue to file false charges such as this biker case, highly questionable ones and even ridiculous cases like the infamous “Chicken Case.” It is a given that Gilbertson will do everything in his power not to take a false charge to DA Campbell, but we still have the Grants Pass Police Department and the Oregon State Police to contend with. This biker case was brought to DA Campbell by the Oregon State Police who failed to do an adequate investigation – in fact justice would have been far better served had they not even responded to Stanley Strange’s 911 call.

This dilemma we face can only be solved in one manner – we must properly fund our Sheriff’s Department and our county commissioners must cut back funding from District Attorney Stephen Campbell. This will be somewhat of a headache for Gilbertson because some of the cases he brings won’t be prosecuted, but until we can rid ourselves of Campbell and get an ethical District Attorney who possesses some sort of a conscience we have to protect the citizens in our county who could be targeted with false criminal charges. As always, the “buck” stops on the doorstep of our county commissioners. From all appearances, our current commissioners appear to be headed in the right direction, however, if they fail to reign-in District Attorney Stephen “Nifong” Campbell and his patented false prosecutions the blame will be theirs.

Note: If the upcoming levy fails, we all have one person to thank/blame…

Anyone with information on DA Stephen Campbell is urged to contact Edward Snook at 541-474-7885.

“There’s a New Sheriff in Town”