“Your investigative reporting was instrumental in stopping the District Attorney’s abusive attacks.” 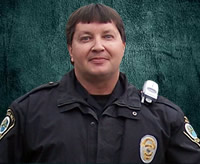 When there are good police officers out there it is our duty to help them! Dean Muchow was the Gold Hill, Oregon Chief of Police, and he fought against government corruption with the US~Observer’s help.

Sometime in 2000 or early 2001, then the Union City Police Chief, Muchow was given a metal stairway by a businessman who had salvage rights to a mill site that was being demolished in Union, Oregon. Muchow used the steps on his property to enter a loft in his garage. Little did Muchow know that this gift would be at the center of a malicious prosecution that would ruin his chances for career advancement, and would mar his reputation. That is until the US~Observer got involved.

Muchow was being dogged by accusations of wrong-doing, all because he did his job.

According to the article “Conspiracy Against a Good Cop – A Malicious Prosecution“:

Having arrested the parents of the Union City city administrator for two felonies, and having investigated the son of a councilman for drug possession Muchow had caused an untenable situation for himself in Union. These people retaliated by pushing false criminal charges against him. It was alleged he used city property for personal use including the city’s gas card. The Union Co. D.A. was Martin Birnbaum.

After successfully defending himself from the “gas card” allegations, Muchow decided to find work elsewhere. He took the position of Police Chief in Gold Hill. This however didn’t stop the push to criminalize such an outstanding officer. Union County D.A. Martin Birnbaum filed charges against Muchow on allegations that he had stolen the metal staircase he had actually been gifted.

Crooks inside the city government in his new home of Gold Hill seized the opportunity to seek his ousting. They were aided by a reporter from the local newspaper, the Medford Mail Tribune.

Once contacted the US~Observer went to work and we provided evidence of Muchow’s innocence to DA Birnbaum. We also provided that information to a great many people in Union City. While Birnbaum chose to push forward, a grand jury refused to indict.

Even though Muchow was vindicated in Union County, his enemies in Gold Hill conspired in similar ways to ruin him – which didn’t work either because of the exposure by the US~Observer.

It was apparent that Muchow wasn’t wanted but because of the allegations levied at him by Union, Gold Hill and the Medford Mail Tribune he lost the potential for a high paying railroad job.

In the end, Muchow was completely vindicated and he now works for the State of Oregon.

If you find yourself facing corrupt government officials or a malicious prosecution, protect yourself. Give the US~Observer a call – 541-474-7885. 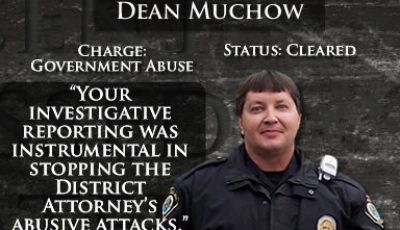