Union County, Oregon – Sometime in 2000 or early 2001, then Union City Police Chief, Dean Muchow was given a metal stairway by a businessman who had salvage rights to a mill site that was being demolished in Union, Oregon. Dean used the steps on his property to enter a loft in his garage. Little did he know that this gift would be at the center of a malicious prosecution that would ruin his chances for career advancement, and would mar his reputation. That is until the US~Observer got involved. 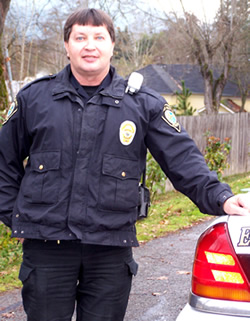 Having arrested the parents of the Union City city administrator for two felonies, and having investigated the son of a councilman for drug possession Muchow had caused an untenable situation for himself in Union. These people retaliated by pushing false criminal charges against him. It was alleged he used city property for personal use including the city’s gas card. The Union Co. D.A. was Martin Birnbaum. 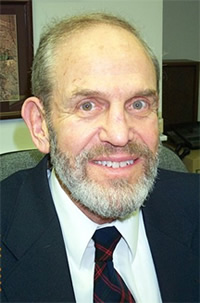 Dean Muchow prevailed in court and was exonerated of all wrongdoing. He then began a lawsuit against the city for breach of contract and malicious prosecution.

An offer of settlement and amended complaint was offered to Union in Nov. of 2005.

Shortly thereafter a new complaint was leveled at Chief Muchow by Union’s new chief of police, Lee Bertsch (in Dec. of 2005). Muchow was never contacted or interviewed by Bertsch and it was alleged Dean stole the metal stairway from the old mill site.

Union Co. DA Martin Birnbaum, took the case to grand jury on Dec. 23rd, 2005. The grand jury wouldn’t accept it. Undaunted, Birnbaum filed the case as an “information” with the court and two local judges wouldn’t hear it. A third judge heard it and threw it out. 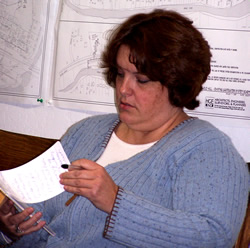 The filing of information was public record and used by Sanne Specht, a Mail Tribune reporter, in an offensive and libelous article stating Dean Muchow had been indicted (Jan 10th, 2006 and was later edited). Sanne Specht had sat next to Scott Elifson, former Gold Hill mayor, during the Jan. 9th city council meeting in Gold Hill and reportedly told Elifson, “I’ve got Dean Muchow again.” Specht ran her article without verifying any information or talking to the Union Co. D.A.

Certain council members clamored to terminate Muchow based on Specht’s false statements, however some proper investigating by Edward Snook saved Gold Hill much embarrassment and liability. According to Snook, “Lap-dog reporters like Specht give all reporters a bad name. She has openly been stalking Chief Muchow with the help of certain city council members and a city employee. Before I’m done with them their names and miserable reputations will be known in households all over this country and Specht will soon find out that the only person she ‘has got’ is herself.”

The article hit Muchow by surprise and shock. Muchow was in the process of finishing negotiations with the Union Pacific Railroad for a detective position. Because of the new employment opportunity Muchow considered offering a civil compromise to the situation in Union over the metal stairs. The railroad police even went to Union to investigate the incident and found Muchow without fault. The Union Co. D.A. told the Railroad Lt. he was not going to charge Muchow, nevertheless the false and adverse article published in the Medford Mail Tribune ended his chances at this high paying job due to the bad publicity.

Normally, a filing of information by a DA is done to get someone arrested quickly because there is not enough time to convene a grand jury. It is virtually unheard of that a DA would attempt to file the information with the court and get a person arrested after a grand jury had kicked out a groundless charge.

Any knowledgeable DA would have looked at the case and seen its obvious flaws and statute of limitations problems, and dropped the flagrantly malicious prosecution. If this issue over the metal steps was not an easily provable conspiracy by corrupt people in Union, Oregon, Union City Police Chief Lee Bertsch would have at the very least questioned Muchow before pursuing the ridiculous and false charges. Additionally, Muchow has never been interviewed or contacted by anyone else, including the DA. The case reeked of back door politics, incompetence and was sloppy. No wonder the grand jury or a judge would not accept it.

Like any act of terrorism it cost Dean and his family a lot of money.

US~Observer investigative reporter Edward Snook stated, “I’m very perplexed over this situation. I have always respected Birnbaum and in fact I spoke with him personally over this matter and was told there wouldn’t be any charges.” Snook continued, “There must be someone other than Birnbaum out to get Muchow. I know Muchow personally and I know how honest he is. Dean has as much integrity as any officer I have ever known and if any further attempts are made by anyone to tarnish his reputation I will move into Union County with a highly qualified team of investigative journalists and raise hell right out of the ground.”

After learning of the loss of the job with the railroad, Dean Muchow has chosen to keep his honor and integrity and fight this malicious prosecution,. D.A. Birnbaum is reportedly now deciding to run this case by the grand jury again in an attempt to prosecute Muchow. This, in spite of the fact witnesses have come forward to verify the steps were on Muchow’s property in 2000 or 2001. Mr. Craig George, the scrap and salvage company owner, came forward to state the steps were his to dispose of per contract. He had given a set to someone else and no one complained about that. He had given Muchow many items from the old mill site, and in a phone interview taken on January 27, 2006 Mr. George admitted that he had the scrap rights and that he had in fact given the metal steps to Muchow. George also stated that he was shocked that no one had spoken with him about the steps even though the DA and current chief know that he owned them. Does this sound like a conspiracy or what?

Mr. Carper, the mill site owner, called a mutual friend of Dean’s and asked Dean to call him. Carper reportedly stated he only wanted the steps and did not want Dean prosecuted, but Martin Birnbaum reportedly insisted. Carper had gone to the police station to find out where Dean had gone but got no further, he reportedly said. Mr. Carper has absolutely no right to the metal steps simply because they were not his once he signed over salvage rights to George and he certainly has no right complaining to anyone about them.

This is outrageous. Why is this D.A. abusing his power in harassing Chief Muchow? Muchow has already lost his savings and borrowed heavily to fight the first malicious legal attack. Now he will lose his home and most likely go bankrupt if Birnbaum goes forth, omitting facts, in an attempt to prosecute him. It’s all in Birnbaum’s hands now. If someone else is pushing this conspiracy, Birnbaum has enough information to stop the false charges rather than push them into a costly legal arena. We will soon find out if Birnbaum is an ethical District Attorney or part of a dark conspiracy.

In wrapping up our investigation into this malicious prosecution we spoke with Chief Muchow. Muchow stated, “In my career I’ve had our family car blown up by crooks, my home firebombed. I’ve arrested people at gunpoint on my property who came to do me harm, my children attacked, and many physical attacks on my person. Becoming Chief enlarges the circle of potential enemies. Now I get attacked in an official context and through those members of the media that have no honor. Those people are the moral equivalent of those who sought to burn down my house.”

Editor’s Note: The US~Observer will continue to inform our readership on this tragic malicious prosecution and anyone with information on Union Police Chief Lee Bertsch, Union County resident Tim Carper, District Attorney Martin Birnbaum, Medford Mail Tribune political activist and reporter Sanne Specht or anyone else involved in this case is urged to contact the US~Observer at 541-474-7885. 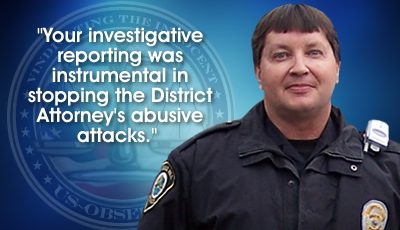