BREAKING NEWS
70% of people in local jails are not convicted of any crime
Tyler Perry offered a job to the first inmate released under a new conviction integrity program in Georgia
Police reject judge’s call to apologize over wrongful conviction
US states move to stop prisons charging inmates for reading and video calls
‘It’s a Lie, but It’s Fun’: An Officer’s Falsified Report Leads to a Man’s Suicide

The False Conviction of Kris Smith

Also Contributing:
R. S. Errol
Investigative Reporter
Grand Junction, CO – There is a cynical and probably accurate saying about the criminal justice system in this country that states: If you are a prosecutor and have a good case, argue the facts, if you have a weak case argue the law, and if you have no case attack the defendant’s character.

Apparently this is what occurred in Denver during the first week of August. Equal protection under the law is a legal tenet that derives itself from the Fourteenth Amendment that is touted time and time again to ensure that all the people are treated fairly under the laws of this country. This tenet was totally disregarded during the Federal District Court trial of Kris Smith a Grand Junction business woman and community volunteer. Smith was convicted by a jury on August 4, 2006; a jury that never heard most of her evidence or from her key witnesses. This story will reveal the unsavory side of our government officials and expose the malicious prosecution that certain vindictive functionaries perpetrated upon Smith with total disregard for her rights, in limiting her ability to mount a defense. Smith was rail-roaded for an alleged crime that was only vaguely addressed during the five day trial.
Seven years ago Smith was introduced to an investment program sponsored by Anderson Ark and Associates (AAA). When she learned that the nature of the business was a tax deferral program (Complex Business Organization (CBO) – pay less taxes in the first few years and pay more taxes in the future) she began her due diligence as to whether the investment was sound in nature and legal in application. Being a sharp business women she consulted the IRS tax codes, contacted the local IRS office for publications to verify how the code applied to the business plan she was contemplating and discussed the opportunity with her Certified Public Accountant Sam Baldwin of Cucchetti, Baldwin and Co., CPA’s based in Grand Junction, Colorado. The results of her search validated her intentions to move forward with the investment as there were no red flags that would have made a reasonable person shy from the opportunity.
Kris Smith was educated, as were other investors, by Certified Public Accountants and IRS enrolled agents (IRS sanctioned tax preparers) of AAA. One such person asserted that he was a former IRS agent and attested that everything in his presentation was tested and proven to be correct in all aspects. This cadre of experts answered all of her many questions and backed up their responses with citations from the IRS Code Manual. Having CPA’s, enrolled agents and ex-IRS agents propose a solid business transaction made it hard to resist and seemingly a legal and profitable thing to do. For two years Smith participated in the program, all the while receiving updates from AAA with prognostications of potential cash flow which would result in greater income.
In addition to the deferred tax program AAA also offered a high yield loan investment program that lured in many people. Smith invested all of her retirement funds and life savings, including the proceeds of the sale of her former business into the loan program and reported any and all income less expenses on her income tax returns. All was seemingly fine with the world since Smith had done her due diligence and examined the tax consequence of her actions.
In August 2000, Smith attended a CBO business opportunity meeting at the local Holiday Inn hosted by AAA management personnel. In attendance by her personal invitation was her CPA Sam Baldwin, the man who gave her the green light to invest in the AAA programs. Also invited was CID-IRS agent Michelle Hagemann of Glenwood Springs, Colorado at the behest of some potential investors. At this meeting Smith was introduced along with another Coloradoan Bill Hays as being new Information Officers for AAA. The job of the information officer was to assist others, curious about the program, with answers to their particular questions. Having been in the personal service business her whole life, it made perfect sense to Smith to assist others looking for a way to save taxes and/or create income. Kris especially felt she was doing the right thing by people because of her thorough research into the program.
In late February 2001, the Department of Justice Tax Division and elements of the Internal Revenue Service conducted a raid on multiple office locations of AAA in both this country and Costa Rica. Smith was questioned by two IRS agents who claimed to be ignorant about taxes thereby precluding Smith from talking to them. Baldwin, who apparently panicked by a similar visit hunted Smith down proclaiming he was scared to death. Smith instructed him to abide by the IRS information requests as she had nothing to hide. He did so while stating that he had to get along with the IRS agents who held his livelihood in their hands. Are these people his boss? (Taxpayers beware…your tax preparer is not always on your side)? 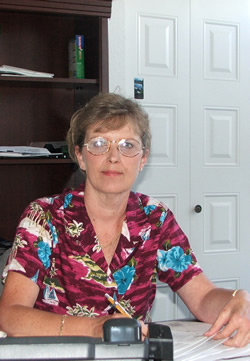 Like us to get the latest from US~OBSERVER delivered to your feed.