Family Courts – A Court Of Systems, Not Law 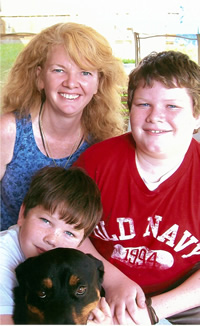 Lake Charles, LA – After 2-1/2 years, 5 attorneys and over 6 figures out of pocket, Kathleen Berry was ordered to an arraignment in late January in which she must attempt to explain why she tried to feed her two children who she has joint custody of. On July 31, 2008 Kathleen Berry was issued a warrant for her arrest for allegedly violating RS 14:45.1 – Interference with the custody of a child. She was then arrested on August 1, 2008. All of this stemmed from Kathleen’s attempt to feed her children as they were left alone at home by their father who has done everything in his power to keep them away from his ex wife Kathleen. Local family court judge Guy Bradberry and attorney Henry Liles have also played a major role in the reported unlawful attempts to prevent Kathleen from seeing her children, Zachary and Ryan.

According to Louisiana law:

A. Interference with the custody of a child is the intentional taking, enticing, or decoying away of a minor child by a parent not having a right of custody, with intent to detain or conceal such child from a parent having a right of custody pursuant to a court order or from a person entrusted with the care of the child by a parent having custody pursuant to a court order.

It shall be an affirmative defense that the offender reasonably believed his actions were necessary to protect the welfare of the child.

B. Whoever commits the crime of interference with the custody of a child shall be fined not more than five hundred dollars or be imprisoned for not more than six months, or both. Costs of returning a child to the jurisdiction of the court shall be assessed against any defendant convicted of a violation of this Section, as court costs are provided by the Louisiana Code of Criminal Procedure. Added by Acts 1981, No. 725, §1.”

Strangely enough, a warrant was not presented to Ms. Berry when she asked one of the deputies at the Calcasieu Parish Sheriff’s office for a copy. The Family Court in Lake Charles along with the help from Ms. Berry’s ex-husband Michael Hebert and his attorney have reportedly denied her a trial for almost 2-1/2 years, obstructing Ms. Berry from raising her children. It is also reported that these same people were able to obtain a signed warrant for her arrest within 24 hours of her attempt to feed her two children Zachary and Ryan.

A close friend of Ms. Berry had accompanied her on the afternoon of her attempt to drop off lunch for her two boys who were left home alone. Ms. Berry’s children had told her in a previous phone conversation that they had been eating toast for meals on more than one occasion, which is what caused much concern for Ms. Berry. Kathy and her friend, who accompanied her to the residence of her ex-husband, stated that neither child opened the door to the home or had any physical contact with their mother while she put their lunch on the doorstep and then walked away.

A reasonable person would agree that a biological mother should never be kept from her children unless there were certain circumstances which called for such a matter. During our investigation of Kathleen Berry’s case there has been no reason to see her as an unfit mother. The US~Observer has been provided with innumerable statements from credible sources that show the opposite without any doubt.

Ms. Berry has obtained letters from psychologists, “Fathers” from Church, doctors, friends, family and employees from an all too well known place of interest, “The Whistle Stop”, stating that she is in fact a good mother who should have custody of her children. The Whistle Stop is a remedial place where parents are court ordered to see their children under supervised visitation at a cost to the parent of $25 per hour. All of these witness statements have reportedly not been allowed into evidence supporting the fact that Ms. Berry is an exemplary parent who should be allowed to raise her children and be a part of their life. Nothing can take back the time that has been purloined from Ms. Berry as she stays optimistic in her seemingly never ending battle to reclaim her rightful custody of her children, Zachary and Ryan Hebert.

In closing, Ms. Kathleen Berry asks that the Calcasieu Parish Family Courts give her what is entitled to her under Louisiana Law, a full, fair and honest trial so that she can re-claim what priceless time she has already lost and begin to build a relationship with her children which she rightfully deserves.

Editor’s Note: If you have information about Judge Guy Bradberry or anyone who is unjust in the Lake Charles Family Courts, please contact Joseph Snook at 916-342-0132 or email – joe@usobserver.com.