Fraud on the Court Through Prosecutorial Misconduct

Michael Quiel was convicted of tax crimes on April 11, 2013. He even served a federal prison sentence. The thing is – and it’s a big thing – he was innocent and he didn’t get a fair trial. When he sat in front of Judge James Teilborg at the Sandra Day O’Connor Federal Courthouse in Phoenix, Arizona, the facts were concealed, even created. This amounted to fraud on the court, and it was perpetrated by IRS agent Cheryl Bradley, Quiel’s former attorney Christopher Rusch and federal prosecutor Monica Edelstein. This fraud was designed to do one thing, convict Michael Quiel for crimes he did not commit.

The made-up narrative the trio concocted was of a man – Quiel – who had knowledge of filing certain IRS documents. Both Rusch and Bradley testified that Quiel had filed those documents previously but then didn’t file them on certain years in what they would describe as “an attempt to hide his tax crimes.”

Now, years later, Michael Quiel was able to attain his IRS master file through Freedom of Information Act (FOIA) requests. The file shows exactly what he had maintained all along; he hadn’t filed those documents on the years Rusch and Bradley testified he had.

In fact, Rusch had been Quiel’s tax attorney and was responsible for Quiel’s taxes being filed. If Rusch knew Quiel hadn’t filed those documents, why did he testify he had? The same can be asked of Cheryl Bradley. If the IRS file says Quiel didn’t file them, why would this IRS agent lie and say Quiel had? Let’s not forget that it was Prosecutor Edelstein who directed and elicited the testimony of both these “witnesses”.

Since the IRS was able to withhold the master file for so long – thanks in large part to Judge Teilborg who didn’t allow for it to be produced at trial thereby playing a large role in the fraud in his courtroom – there was no other evidence to prove Quiel’s innocence of these charges. That alone is the answer to the questions above. They were able to lie in court, have it go unchallenged and ultimately believed by the jury, because they were able to keep Quiel from getting and showing the proof he needed to refute their claims.

Because of their fraud, Michael Quiel’s family was almost destroyed. He and his wife suffer PTSD. They all lost faith in the United States justice system. For Quiel himself, he lost his freedom for ten months, his business he had spent years building, much of his wealth he had worked hard to attain, and most detrimental, he lost his reputation – something he continues to fight to win back. All for what? So some prosecutor could build their own reputation by taking him down for something he didn’t do? 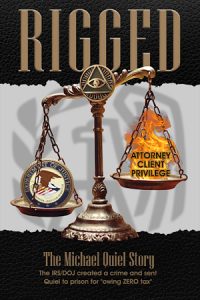 The story is a deep one, and an interesting read as outlined in Michael Quiel’s book, Rigged, now available (see the ad at the bottom of the page). Best yet, all profits from the sale of his book will be donated to benefit innocent victims of false charges and prosecution.

Prosecutorial misconduct is real on all levels of government. Don’t believe the system if they tell you otherwise. With an overwhelming tone, that if it can happen to him, it can happen to you, Quiel’s book Rigged shows just how far government will go to convict you if they want you to be guilty – even if you are innocent.

For all the innocent victims of false prosecution out there, Michael Quiel has one thing to say, “keep up the good fight. I know I will.”

Editor’s Note: Christopher Rusch is continuing his life of crime and is the focus of an ongoing US~Observer investigation. See the article “Chris Rusch, aka Christian Reeves Continues Committing Crimes” on the front page of this edition.