Fraud Upon A Jackson County Court

MEDFORD, OR – Filing an affidavit to the Jackson County court that was knowingly false, Katherine Varni awaits a “Summary Judgment” ruling by Judge Philip Arnold. The motion is based on statutes of limitations. Katherine’s attorney Robert Dickey is attempting to get the court to believe that Dean Varni’s case should be dismissed because it wasn’t filed within the statute of limitations. Should Judge Philip Arnold rule in her favor he will have been greatly deceived in accepting Katherine’s 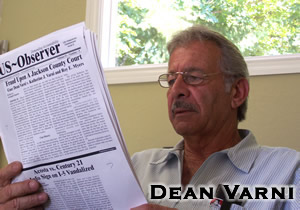 obviously fraudulent and perjured document. If the judge accepts the fraud, Dean Varni, Katherine’s ex-husband and the target of her fraud, is ready to submit a “Motion for Reconsideration” along with a copy of a tape recorded phone conversation between investigative reporter Edward Snook and Katherine Varni (taped on March 23, 2004) which proves her fraud beyond any doubt. We should note that Judge Arnold correctly disallowed a response to Katherine’s summary judgment motion due to the fact that Varni’s attorney had filed his response well after the dead line. However, we believe the judge’s judicial cannons and his own integrity will cause him to act upon the fraud and see that Dean Varni gets his day in court. Further, according to Observer legal counsel, the motion should be denied as there are facts in dispute between the motion for “Summary Judgment” and the complaint filed by Dean Varni which were not addressed in Katherine’s motion.

In 1997 Dean Varni didn’t have to think hard about quit-claiming his divorce decreed deed of property interest over to his ex-wife Katherine Varni. She had approached him about securing a loan for her business and, according to her, couldn’t do it any other way than having his name off the property and home that they jointly owned. They were on good terms, so Mr. Varni thought, and besides according to paperwork he signed and sent back to her, he was supposed to be put back on the property within two weeks. He even continued to pay his share of the loan payments throughout the time (through February of 2002) he was off the deed, in good faith that his name had been reinstated.

After years of promises to buy him out and never delivering, Dean Varni became suspicious of Katherine, the woman whom he had entrusted with his worldly possessions as well as all of his financial records and his bookkeeping.

Hiring an investigator in mid-2003, Dean Varni set out to find exactly what was going on. He found that his name had never been put back on the property and in December of 2003 he discovered that Katherine Varni had put her alleged boyfriend, Roy Myers, on the deed to the property and home.

Still giving Katherine the benefit of the doubt, Mr. Varni sent her a letter asking her to pay 50% of the property value, as that was what was owed him. When the deadline passed, he sent her another letter via certified mail stipulating more time, stating that he would have to seek legal proceedings should she not respond.

Unfortunately, the correspondence was left unanswered, and Dean Varni filed suit to regain the interest in his property that Katherine had stolen.

According to Katherine Varni’s court submitted affidavit, she feels that the property and home were meant for her. She further states that she made all of the payments on the loan and the insurance and claims that Dean Varni has no ownership interest at all.

Records of payments made by Dean show otherwise, as does his effort to reclaim what was taken from him.

Now embroiled in legal wranglings Katherine Varni’s legal council has asked Jackson County Judge Arnold for summary judgment on the grounds that the fraud occurred after the 2-weeks had elapsed in 1997 and that it has passed the statute of limitations. In other words, Robert Dickey bases his motion on the grounds that Dean should have known after the two weeks that he had been defrauded. This is a frivolous argument at best given the special relationship of trust that Dean and Katherine shared from 1978 through March of 2003. According to Dean Varni’s legal council, “The judge has to accept all the pleadings of record and he should base his ruling on this.” But Dean Varni had missed a key court filing date in submitting some evidence that directly showed the fraud committed on the court and on him which had opened the debate over this summary judgment.

“Really, the ruling could go either way, but the case law says that our position is correct.” Dean Varni’s attorney explained after court. According to one of Dean’s many supporters, “One thing is for sure, many eyes are on the court to do the right thing and not let the court become a haven for fraud.”

Acosta vs. Century 21 Real Estate Info Sign on I-5 Vandalized