Reno Francis and Other OK Innocents

Oklahoma, USA – Ron Williamson, Dennis Fritz, Calvin Lee Scott, Jeffrey Pierce, Thomas Webb III, Timothy Edward Durham, Robert Lee Miller Jr. and Arvin McGee. What do these people have in common? They each served several years in an Oklahoma prison for a crime they did not commit. Reno Francis was literally railroaded for a crime he didn’t commit. 17 days after receiving his false charges he began serving his nearly 37 years-to-date in prison in the “Great State of Oklahoma”

It makes one wonder – if these people have been cleared of the crimes of which they were convicted, how many more people languish in our prisons for crimes of which they are not guilty? According to Florida Supreme Court Justice Gerald Kogan (retired), “Anybody who understands the justice system knows innocent people are convicted every day.” Each of these men have been cleared by DNA evidence. But what happens to those innocent people in prison that cannot be cleared using DNA? Is there any help for them?

What about Reno Francis, (U.S. Observer, volume #1 – number 15), who has sat behind bars for almost 37 years for a crime he had nothing to do with? When he was sentenced to life in prison in September 1970, for the murder of Cathy Scott there was no thought of DNA evidence. It would be 19 years before the first conviction was overturned due to DNA testing. So for Reno that avenue is closed.

Although Reno was innocent of this brutal crime, he was coerced into signing a confession written by a “man in a suit” in order to avoid the possibility of dying in the electric chair. Studies have shown that at times law enforcement officers use harsh or threatening interrogation tactics with uncooperative suspects. Some police officers or district attorneys use tactics so persuasive that an innocent person feels trapped into confessing. Sometimes, as in Reno’s case they are told they will be convicted with or without a confession and their confession is the only way to avoid the death penalty. 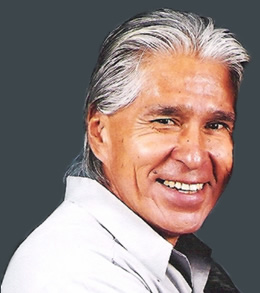 According to statistics, in more than 25% of cases exonerated by DNA innocent defendants had made incriminating statements, confessed to committing the crime or pled guilty. This tells us that confession is not always synonymous with guilt, but can be influenced by external factors. As human beings we have a strong survival instinct and if confessing to a crime we did not commit allows us to live longer we are likely to choose “life” over death. As Reno has often said, “As long as there is life there is hope. Once you are dead it is all over.”

According to a University of Michigan study false confessions were most common in murder cases. Those are the cases where there is the greatest pressure to obtain confessions and confessions are often the only way to solve those types of crimes. Of 328 exonerations between 1989 and 2004, 199 were murder exonerations. Death row inmates represent a quarter of 1 percent of the prison population, but 22 percent of the exonerated.

Reno Francis was arrested in Hughes county in August 1970 by officer Orville Rose as he walked in a hospital parking lot for being “high on an unknown substance.” Seventeen days later he was in the Oklahoma State Penitentiary in McAlester serving a life sentence for murder. He had a hearing in front of the Honorable Judge Bob Howell but no trial, he was in a line-up but he was the only person in that line-up, he had a court appointed attorney but he was not even a criminal lawyer. The assistant district attorney, John R. Turner, who prosecuted and threatened Reno with the electric chair unless he agreed to confess to the murder of 13-year old Cathy Scott, lived close to and was good buddies with the oil and gas lawyer, Stanley Huser, Jr. who was appointed to represent Reno. According to records, Mr. Turner was fired from his position as assistant district attorney shortly after Reno’s case for using underhanded tactics and threatening defendants who refused to plead guilty. But it was too late to help Reno.

The head district attorney in Hughes county at the time was a well respected lawyer, Gordon Melson. After Reno was approved by the parole board in 2002, but consequently denied by then Governor Keating, his case was brought to Mr. Melson’s attention. After hearing about Reno’s case, Mr. Melson wrote a letter on Reno’s behalf to the parole board requesting that they bring Reno up again for parole consideration right away rather than making him wait the usual 3 years until 2005. He stated that Reno is not a danger to society and requested that the board release him. The parole board refused to do this. When Reno came up for his regular parole hearing in 2005 Mr. Melson again wrote to the parole board and asked them to release Reno. That time Reno only received 1 “yes” vote from the board and 4 “no” votes, nowhere near the majority he needed for approval.

During his 36 ½ years in prison Reno has been before the parole board over a dozen times including one time when a board member continued to read his newspaper during the hearing and completely ignored Reno. As the law now stands the parole board does not have to see an inmate who is classified as a violent offender if they look at his file and decide he is unworthy of their time. For this group of prisoners the parole hearing is a two stage process. Stage one is a jacket review where the parole board reviews the inmate’s file. They then vote on whether to pass the inmate to stage two where he or she is permitted to go before the board and speak to them in person or on closed circuit television. If the inmate does not receive a majority of positive votes from the parole board during stage one he is automatically put off for 3 more years. At that time his file will be reviewed again and the process repeated. If, however, he is approved to go to stage two and the board consequently approves his parole, the ball then passes to the governor.

Oklahoma is the only state in the union that still requires the governor’s approval for all paroles. It is amazing that the governor, being only one person who has never met the inmate, has the final say over the parole board who did actually speak with the person. It seems that the governor has many other jobs to accomplish and the parole board, who has been hired for the task should be allowed to do the job for which they are being paid by the taxpayers. Also removing the governor from the parole process would remove a great deal of the political pressure from the decisions that must be made regarding the lives of the inmates. It would allow the parole board to evaluate each individual based on their problems or their accomplishments rather than on how each decision will affect their own political career as can be the case with the governor.

According to Pardon and Parole records, in 2004 the board denied 56.6% of the 8,395 inmates who were brought up for parole. In 2005 they denied 67.1% of the 7,895 people who came before them. In 2006 68.5% of 7,052 prisoners were turned down for parole. These denials total up to 14,887 people who were denied parole in the past three years. Considering the drastically over-crowded conditions that plague the department of corrections this level of parole denials seems to defy logic.

Justin Jones, Director of the corrections department made the statement on April 27, 2007 that the department would have to quit accepting inmates in approximately two weeks.

According to a recent statement by Terri White, Commissioner of the Dept. of Mental Health & Substance Abuse, 60% of Oklahoma inmates are locked up for non violent offences. She indicated that they should not be in the department of corrections. They will continue to be incarcerated, however, until laws are changed or the parole board and Governor Henry take a stand and release them. Will they ever begin to do the right thing or will we continue to throw hundreds of millions of dollars per year into the department of corrections that could be spent on our schools, roads, and programs for the elderly?

Besides non-violent offenders there are also many inmates listed in the violent category who have served 15, 25, even 40 years and who have a long record of good conduct. Reno Francis, who has served almost 37 years, falls into this category. Yet the parole board or the governor or both are not willing to even give him a second chance. This is especially damning for the parole board and governor’s reputations as they should be releasing Reno due to his innocence and unconstitutional incarceration from the very beginning. Imagine being in his situation – locked away from the world for a crime he did not commit, no write-ups for misconduct in over 20 years, and denied parole time after time. Regardless of the fact that he has completed all of the programs available to him in prison – he actually completed them back in the 80s and regardless of the good activities he has participated in such as the Speak-out program and the Prisoner’s Run Against Child Abuse, he still wears the “violent” label.

The public has been so frightened by the news media coverage of so-called violent people that a great deal of pressure has been applied to the legislature and the governor so that no one is willing to pass more lenient laws or to appear to be “soft on crime.” There is, however, a difference in being “hard on crime” and in being “stupid on crime.” Many people who were convicted years ago of a harsh crime have changed their lives for the better and are now prepared to be productive members of society. If allowed to do so they are now capable of being a part of the solution rather than a part of the problem. 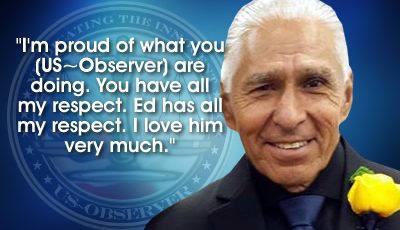 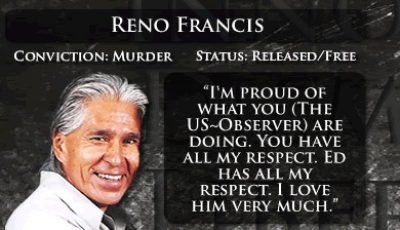 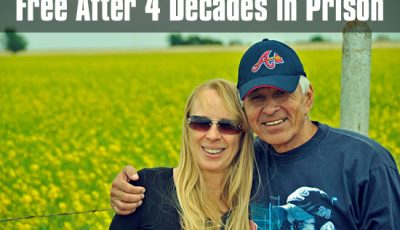