Grants Pass, OR – On January 25, 2006 Gil Gilbertson, whose accolades include over 25 years of law enforcement experience as well as working with the U.S. State Department in Bosnia and Kosovo to successfully form local police agencies and more recently protecting New Orleans hospitals in the aftermath of Katrina, has announced his bid to be the next Josephine County Sheriff. 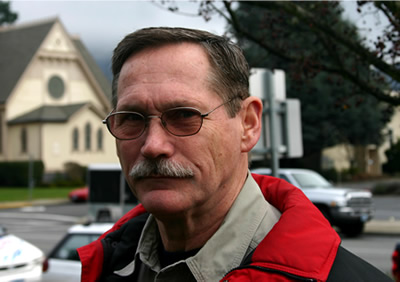 Citing a lack of overall morale in the existing sheriff’s department and poor administrative procedures brought on by the “good-old-boy” mentality that currently exists, Gilbertson said that it was time for a change, one that would lend itself to a transparent sheriff’s office which would be held accountable by a public commission.

Gilbertson also made it clear that he could functionally operate the department on a restrictive budget and would do well in keeping new spending to a minimum, as his experiences abroad had given him a familiarity with such endeavors. These words seemed to go well with County Commissioner Jim Raffenburg whose promise not to increase county spending has pitted him against his fellow commissioners in regards to the county employee raises. Raffenburg along with Commissioner Dwight Ellis were present for Gilbertson’s announcement.

Gilbertson has quickly won support and his campaign manager Scott Calhoun attributes this to Gilbertson’s genuine character, solid background, and inherent trait to do good.

With County residents who initially backed Dave Daniel, the current sheriff when he ran for office, and then witnessed his transformation from promising candidate to inept administrator, they are skeptical of another individual who promises changes at the sheriff’s department. But they all seem to agree that there is much work to be done in that office and that “new blood” just might be what is needed.

As one Selma resident stated, “The entire department needs an overhaul … and that has to start at the top.”

And that is just what Gilbertson is promising. A new invigorated department that doesn’t quash a new recruits verve, but embraces it and reaches out to the public with that same type of emphatic enthusiasm to gain their involvement.

Those attending the announcement cheered when Gilbertson demanded that the department be held accountable to the public and that he would open himself up to a public Q & A throughout his term. This along with his down-to-earth good-natured approach made him a quick favorite even for those who weren’t attending as supporters.

Editor’s Note: The US~Observer will be following Gilbertson’s candidacy with keen interest. As we have reported on more than one occasion, the current Daniel regime needs to be ended but we will remain skeptical of this newcomer. If you have any information about Gil Gilbertson please call 541-474-7885. 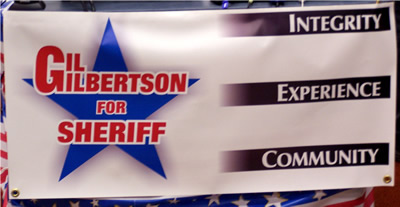 Unions are Dangerous to Business and Taxpayers