Gold Hill, OR – The US~Observer has published numerous articles regarding the unethical, unprofessional and outright underhanded actions taken against Gold Hill’s outstanding Chief of Police Dean Muchow by City Councilors Hobart Gus Wolf, Jan Fish and Donna Silva. The three have continued their slander and libelous acts to date, showing no sign of easing up. 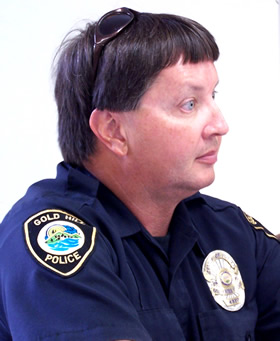 In January 2006, local citizens fed-up with the undesirable’s scurrilous attacks on their police launched a recall effort to oust them. While they were able to get the culprits on the ballot the recall failed at the ballot box, due in large part to lies printed on hand-outs and distributed throughout the city.

Among the false allegations aimed at Muchow, written in the form of questions, is the statement asking, why did Chief Muchow use the city charge card to buy gift certificates for contractors who donated labor and material when Chief Muchow supervised the construction of Gold Hill’s new police station?

The fact is the station was built for pennies on the dollar. “Giving a contractor $200 for a $4,000.00 commercial floor is just good business and did not benefit anyone but the city,” said Muchow. The Chief continued, “I also bought meals for those workers who donated their labor while they were working. The labor was professional and worth every bit of $20 per hour. Buying a cheeseburger for the professional carpenter is just good business and shows gratitude.” Chief Muchow should have received an award for not going over the paltry budget he was given to build the station, instead of backstabbing from hateful councilors. Gus Wolf and Donna Silva objected to the purchase of the these meals and gift cards given to various contractors and laborers even though a hypocritical Wolf gladly accepted a free lunch while he assisted in painting the police station.

In July of 2005, Muchow wrote an $800.00 check to the City of Gold Hill to cover the costs of the meals and gift cards. He wrote in a letter to council that this should put an end to the issue and it would buy him more “bragging rights” to the building of the station. In August of 2005, the Gold Hill City Council voted to return Muchow’s check. Donna Silva cast the only “no” vote. Given that this matter and other dead issues were settled in 2005, why would Wolf, Fish and Silva revisit the issues on the flyers they passed out? At one point the vindictiveness of these three nearly cost the City of Gold Hill traffic safety grant money due to the council in-fighting and attacks on the police. Karlyn Campbell of the Oregon Association of Chiefs of Police (OACP) wrote in a letter, “I’ve been reluctant to allocate funds to your department as it appears your city council in not supportive of the police.” When three out-of-control councilors constantly create turmoil it is always the citizens who pay. 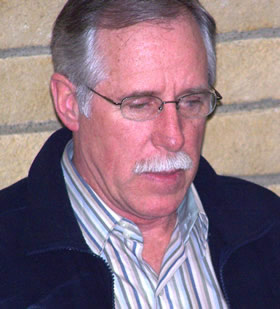 In June of 2006, Gus Wolf, in consort with recalled city councilor Christine Alford crafted a 13-point complaint against Chief Muchow to the Oregon Department of Government Standards and Practices Commission (GSPC). The complaint states that Muchow “bugged” city hall, perjured himself regarding testimony given while acting as a McCall, Idaho City Police Officer, used the city charge card inappropriately, misused city funds when he purchased meals and gift cards, used the city phone for personal use, etc.

The facts show that Muchow never bugged city hall, a charge that only desperate lunatics would make. The Observer has checked with authorities in McCall, Idaho who inform us that Muchow never perjured himself while in their employment and was never charged with perjury or anything else (they did say he was a “fine officer”). Our investigation has shown that Muchow never used the city charge card inappropriately when he saved the city thousands of dollars building the new police station and that he has never used the city phone for personal use that he didn’t reimburse the city for. In fact, during his first few months of employment Muchow used his personal cell phone for hundreds of dollars of city business which he has never been reimbursed for and he has over reimbursed the city for personal calls each time a bill arrives.

Another outlandish complaint is that Muchow receives free meals from local restaurants. Oddly, Muchow has collected letters from all restaurant owners/managers in Gold Hill to the contrary. The complaint also stated that Muchow used a Gold Hill patrol car to travel to a job interview in Culver, Oregon in May of 2006. A simple investigation shows that Muchow used his own vehicle (his credit card invoice shows Muchow filled the gas tank of his personal vehicle before returning to Gold Hill from Culver), that he went to the interview on his time and that some of the Gold Hill patrol cars wouldn’t be operating were it not for Muchow getting transmission shops and mechanics to donate parts and labor to keep them running. Why didn’t the undesirables properly investigate before spreading their lies? They should have commended the Chief for donating 4-5 hours of phone time regarding City of Gold Hill business while on his trip to Culver; however commendations don’t fit into their conspired agenda against Muchow.

Gus Wolf sent a similar complaint to the Oregon State Department of Public Safety Standards and Training in late May, 2006. The department sent the complaint to Jackson County District Attorney Mark Huddleston. After looking into the complaint Huddleston responded in a letter to the department, “Accordingly, I see no basis to request an investigation into these allegations by the Oregon State Police or any other law enforcement agency.” There is “no basis” because the complaint contains only blatant falsehoods.

As a direct result of the lies, constant turmoil and trouble-making perpetrated by Gus Wolf, Jan Fish and Donna Silva, the insurance carrier for Gold Hill, City County Insurance (CIS) has raised the deductible-per-incident to $10,000.00. Gus Wolf, in his patented sneaky manner has publicly blamed this on the police, but nothing could be further from the truth. The Observer has obtained a correspondence sent to CIS from Hobart Gus Wolf dated July 9, 2006, the very time that CIS was contemplating raising the deductible. Wolf states, “I received a call from a citizen who called 911 to complain of a Gold Hill City officer who ran a stop sign in the center of Gold Hill, with no light bar on, swerved almost to the center line and almost side-swiped the vehicle he and his wife were traveling in. The officer smirked and proceeded to flip on his light bar and pull over a van down the road.” Hobart states that he contacted police liaison Kathleen Price and she informed him that the citizen “had a grudge against the police.” Wolf goes on to talk of another alleged incident and then this mental midget asked CIS for help in resolving disputes within the city. When CIS is contemplating raising the deductible for the city why in the world would Hobart confront them with additional alleged problems (according to our investigation these were actually grudge statements)? Any prudent person reading this article will clearly see that _ _ _ _ stirrer Hobart Gus Wolf and his accomplices are solely responsible for the severe problems facing Golf Hill. During the August 2006, city council meeting Public Works Director Royal Gasso stated to the effect, “I am virtually left without insurance.” It is the opinion of this writer that if the citizens of Gold Hill don’t wake up soon and deal with the undesirables who control their city they will lose their city status in the not too distant future.

Unfortunately Chief Dean Muchow was forced to attend an interview before the GSPC on August 18, 2006 in Salem, Oregon. The Commission, after stating that there was no factual basis to support the false allegations against Muchow voted to not open an investigation into the matter. The hearing lasted approximately 30 minutes. This is just one more example of how the citizens of Gold Hill, Oregon are being cheated; Muchow had to spend an entire day defending himself against vicious and unfounded lies instead of serving and protecting the people he works for.

In wrapping up this informational article I would commend Chief Muchow for single-handedly arresting a dangerous rapist in Gold Hill this past year before the rapist was able to attack more women. Also, it should be noted that he played a major role in solving two Gold Hill bank robberies and that he solved the burglary of a major automotive repair shop in Gold Hill, all the while taking care of his many other responsibilities.

Editor’s Note: As we go to press we are informed that Jackson County District Attorney Mark Huddleston has forwarded complaints to the Oregon State Police requesting that they investigate Hobart Gus Wolf. Wolf has been accused of using his position as a city councilor to gain favors from a contractor working near his home. Reportedly, Wolf has already received an underground phone line free of charge and he wants more…