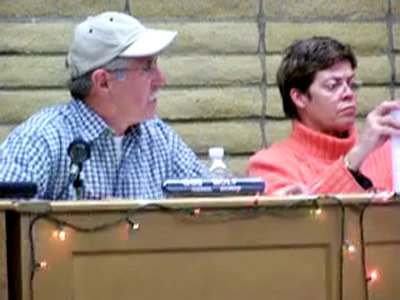 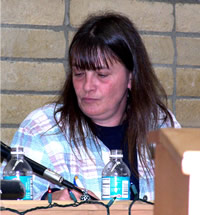 The reasons given for the recall were continuous unethical behavior, lying, and placing the city in a libelous position, however the controversies and dissentions involving the three run much deeper.

From our in-depth investigation we have found that a majority of the community wants their own police department as opposed to having the Jackson County Sheriff’s Office handle law enforcement in Gold Hill. All three councilors targeted for recall will state publicly that they support the police, but their actions prove otherwise. They have constantly, over the past year looked for anything and everything on the police department and Chief Dean Muchow to not only intimidate this fine officer, but to make him look bad to the public as well. They have failed miserable to find one credible issue where Muchow isn’t above reproach.

Recently, Gus Wolf was forced to admit in a public forum that he had commissioned City Recorder Mary Goddard to contact police union rep. Wayne Botta to inquire what the payoff would be to fire both Sgt Hobart and Chief Muchow and disband the police department, only to reform it 30 days later with officer Hanson as head officer. Wolf sat red-faced as he was trapped into admitting to his back-room dealings and Goddard was stunned, unable to speak, when asked if this had occurred.

Wolf, Silva and Fish have utilized very well the services of Medford Mail Tribune political activist and lap-dog reporter Sanne Specht, who has been “stalking” Muchow, using the Tribune in her (and others) attempt to demonize him. However, her lies and those of the three rogue councilors have totally backfired on them. Numerous people have commented both in private and publicly that you can’t believe anything Specht reports on (which is a fact) and those same people have commented that they are “sick and tired of the three councilors constantly stirring the pot, especially Gus Wolf.” The Observer’s position on Specht is that she has worked closely with the squabbling councilors and even closer with Mary Goddard. Specht has factually lied in her articles regarding Chief Muchow and therefore, as our complainant’s observe, she should not be believed or trusted.

The following information on each of the main players in Gold Hill should be taken to heart as it was compiled only after months of investigations. 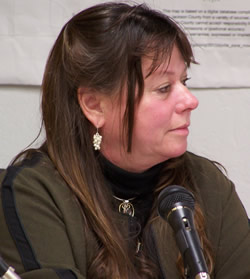 Mayor Sherry Young – We find Mayor Young to be a devoted and studious Mayor. Young has attempted on numerous occasions to bring the city council together, but has run into a brick wall, comprised of (3) bad councilors. Young even went so far as to obtain an attorney from the League of Oregon Cities to advise the council about proper public meetings and ethics, but Wolf, Silva and Fish tended to ignore the facts. Young should be considered an asset to the city and void of those who envy her position and therefore constantly cause turmoil; she will just get better with time.

Councilor Donna Silva (pictured top of story) – We have tagged Silva as a bad councilor who is constantly performing her “dirty work” behind the scenes in Gold Hill. We have been informed from more than one source that Silva worked closely with Christine Alford, a past city councilor who was successfully recalled, to oust former Chief of Police Rod Countryman. Countryman reportedly got fed up with wrongful attacks and resigned in February of 2004. Silva has stated that she only supports a police department because the citizens of Gold Hill do. She added during a council meeting that she personally does not support a local police department. True double-talk! Silva is oh, so deserving of being recalled. 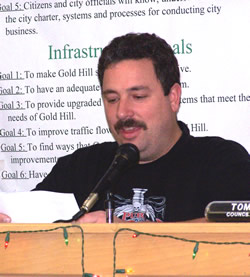 Councilor Mike Hicks – Hicks is a smart and innovative councilor, who is obviously and visibly (at city council meetings) taken back with all the unwarranted controversy. Mike is slow to act and seems to insist on being very thorough before making any decision. Hicks will “go to the source” to get the real information and did so with respect to the police budget, which resulted in opening his eyes to the fact that there was no wrongdoing. Mike is without question an asset to the City of Gold Hill. Our only constructive criticism of Hicks is that he needs to “put his foot down” when faced with the constant deluge of hatred and division promoted by those being recalled… 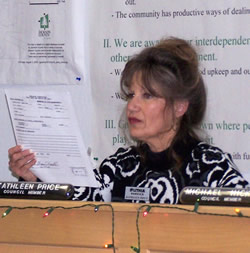 Councilor Kathleen Price – During our investigation of the Gold Hill City Council Ms. Price has quickly evolved into a strong, competent and dedicated council woman. Price was recently appointed “police liaison” by Mayor Young and she wasted no time learning rules and calling rogue councilors to accountability. When confronted with lies and flowery, empty statements, she not only realizes them for what they are, she confronts them. There is no question whatsoever that the voters in Gold Hill should retain this gem for as long as she is willing to serve.

Councilor Gus Wolf (pictured top of story) – Wolf is well deserving of the recall. Gus is the main promoter of all the needless controversy regarding the city council. Gus has a well hidden “God syndrome,” he thrives on control and can be found gossiping and stirring the pot in Gold Hill whenever the opportunity arises. He has personally been conducting a campaign to abolish the police department, while pretending to support the department in council meetings. Gus is also an avid hypocrite. In a recent communication he sent out, Gus stated, “We were a positive and constructive board last administration, we didn’t always agree, but never had all this bickering, gossiping and wasted resources. Let’s get together or get out.” Wow, talk about the kettle calling the pot black! Gus must have been looking square in the mirror as he wrote his short, hypocritical brief. Gus Wolf, who has created a bad image on many occasions for the city and has caused divisions on the council for years, needs to be recalled. As Gus states it, “or get out.” The City of Gold Hill will be a far better place, minus this deceitful individual. Wolf should be recalled. 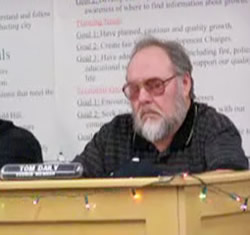 Councilor Tom Daly – Daly is definitely methodical – maybe too slow to react – maybe not. Much like Councilor Hicks, Tom Daly is slow to act, thinking issues out at length. The Observer is well acquainted with Councilor Daly and confident that he will make decisions that are in the best interests of Gold Hill residents. Tom clearly has no hidden agendas and he has the smarts for his position. Tom Daly, much like Councilor Hicks, is not a confrontational person, however at some point, given the severe trouble-making being conducted by rogue councilors Wolf, Fish and Silva, Mr. Daly and Mr. Hicks must move to stop the underhanded actions of Gold Hill’s rogue trio before city liability, etc. becomes irreparable.

Councilor Jan Fish (pictured top of story) – Ms. Fish is at the hub of false allegations and dissention regarding issues facing the council. Jan Fish would love to “run” the Gold Hill Police Dept., –right into the ground. Jan Fish has made numerous false allegations aimed at Chief Muchow and has publicly lied at council meetings by stating that she supports the police department. Fish has lied in public by stating that Chief Muchow cannot manage his budget well. In other words she is saying that Muchow is squandering the public’s money when nothing could be further from the truth. She has tried to convince other councilors behind the scenes of this falsehood. On March 6, 2006, Chris Dye of Purkeypile & Johannsen (the firm conducting the recent audit in Gold Hill) stated that“Dean (Muchow) and Royal (Gasso) have done an excellent job managing their budgets.” We are informed that a Risk Management (for Gold Hill’s insurance carrier) auditor will be conducting an audit of the police department next month, as well as the departments interactions with other departments within the city and its council. We expect the auditor to find that the police department has acted professionally and at a very low risk factor and they will find that Fish and her (2) cohorts have placed the City of Gold Hill in high risk regarding liability. Fish is not competent enough to serve as a councilor and should definitely be recalled. 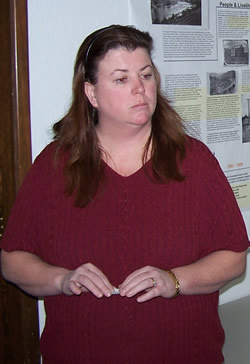 City Recorder Mary Goddard – The jury is still out on Gold Hill’s Recorder. Although Mary Goddard is right in the middle of the goings-on in Gold Hill it hasn’t been completely determined if she is part of the problem or if she has simply been pawned by Wolf, Fish and Silva. Goddard has been an instant source for lap-dog reporter Sanne Specht, however we have no absolute proof that she has instigated the ludicrous problems, falsehoods and stalking attempts that surround her. Stay tuned regarding Mary Goddard. 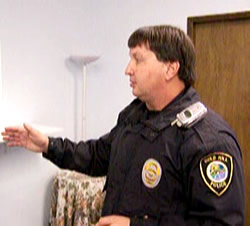 Police Chief Dean Muchow – The Observer has looked at Muchow more closely than any others due to the fact that everything regarding this Chief turns up 100% in his favor. We have concluded that Muchow, even though overwhelmingly supported by the public, has been the recipient of baseless lies, false allegations and laughable innuendos. Muchow has handled these attacks like a professional and gentleman. Few officers would put up with the absolute garbage that this cop has endured. In a recent interview with Chief Muchow he stated, “I have to realize the source when I receive false allegations. I work for the citizens of Gold Hill and I swore an oath when they hired me. I fully intend to uphold my oath and serve to the best of my ability.” The City of Gold Hill, Oregon should be very proud of this officer, they should realize that he has operated a highly successful police department on a shoestring and they should act to stop those who are attacking him. We conclude that Muchow will most likely always have to put up with wrongful attacks because he refuses to be anyone’s puppet. We also conclude that he has plenty of backbone and integrity, which will allow him to withstand the same.

In closing, the recall attempt appears to be a success at this juncture. Petition gatherers have collected over 50 signatures on each rogue councilor to date and they have until the end of April to garner the required 61. Petition gatherers expect to collect at least 100 signatures on each councilor being recalled. If you are a registered voter living within the Gold Hill City limits you have an obligation and duty to take part in your government. We have taken the time to bring you the facts; now you take the time to sign a recall petition and then make sure you mark your ballot to get rid of Gus Wolf, Jan Fish and Donna Silva. Clean up Gold Hill government and in so-doing you will save yourselves much liability and embarrassment.