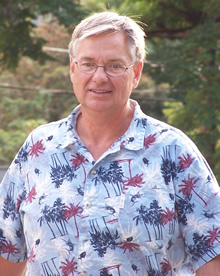 Readers of the US~Observer know the antics of Gold Hill’s public works director Royal Gasso from previous expository articles written about this public employee with a prior conviction for trafficking Heroin.

This reporter recently found out a multiple complaint has been filed against Royal Gasso at the Oregon Government Standards and Practices Commission (GSPC) in Salem.

This is the same commission that recently found one former and two present Gold Hill City Councilors guilty of holding an illegal meeting to facilitate their crooked political agenda against Gold Hill Chief of Police Dean Muchow. Royal Gasso has been one of their best henchmen for many years to ensure his continued abuse of the system and taking the citizens of Gold Hill for all he can.

During the Thanksgiving holiday week-end Gasso was caught by the U.S. Forest Service using a Gold Hill city vehicle for personal use. He was hunting mushrooms in the Buckhorn Ridge area, about 45 miles from his home near Grants Pass, Oregon. It was the day after Thanksgiving and a city holiday. Naturally, Gasso had a wanted criminal with him. Gasso himself was still on felony parole at the time for possession of heroin with intent to deliver. “Birds of a feather.”

Gasso told the Forest Service officer he was returning from the City of Brookings to get information on a “bio-solids” project, and was taking a “short cut” home. The area he was in was hardly a short-cut and he had no permit to pick mushrooms.

Four or five days later Gasso was interviewed by another Forest Service Officer. Gasso’s first reaction to the officer was to yell at him and refuse to be interviewed. He told the officer he was not going to “waste his time talking to him.”

Royal Gasso must have thought about the fact that he is compelled to advise his parole officer when he has had an interview with law enforcement. He then consented to be interviewed.

This time Gasso lied again and said he was on his way to the coast for a meeting in Brookings. That’s odd, Brookings was on holiday too. It appears the only “bio-solids” Royal Gasso was spreading was his own particular brand. I guess he doesn’t know if he’s coming or going.

Gasso rallied his three corrupt councilors, Jan Fish, Gus Wolf, and Donna Silva and council heard only his side of the story. The council did not have the U.S. Forest Service reports to know the depth of his lies. The council voted to not take action unless a complaint was made.

Since the US~Observer first ran this story about Royal Gasso we’ve had several calls about him. This paper has obtained evidence he was driving the city vehicle in the same area on the Fourth of July weekend in 2006. He was also seen driving his city vehicle all over Grants Pass, even going to a restaurant on Easter Sunday this year.

When the newly elected council attempted to tell Gasso he needed to leave the city vehicle in town and provide his own transportation to and from work, Gasso threatened the council and lied and threatened to charge the city for his transportation. They waited and reviewed his contract with city attorney Steve Rich only to find out he’d lied again.

Royal accused Police Chief Dean Muchow of “power grabbing” when the city presented its new vehicle operations policy and got very angry when the policy suggested the police keep track of the city employee’s driving records. He even threatened to sue the city. Gee , I wonder why?

99 Bottles of Beer on the Wall

On May 2nd Royal Gasso stayed in Gold Hill for a budget meeting. He left City Hall around 9:30 p.m. He was reportedly seen buying an “18” pack of beer at the local market by some of the very people he was in the meeting with at city hall.

At around 10:30 that night he was seen weaving in and out of traffic on the Grants Pass Parkway by Oregon State Police officer, Sgt. Fitzgerald. Sgt. Fitzgerald watched as Gasso cut in front of a truck without signaling and changed lanes many more times without signaling. Gasso was estimated to be traveling about 55-57 miles per hour in a 45 zone.

Sgt. Fitzgerald tried to stop Gasso by turning on his patrol lights but Gasso continued for about another quarter of a mile. The trooper turned on his spotlight into Gasso’s rear window. Gasso kept going.

At the intersection of the Parkway and Hwy. 199 the trooper stated the traffic signal had been full-red for several seconds when Gasso drove through it like it wasn’t even there. He finally pulled over but not before he hid a beer under his seat and a half-full beer behind his seat. Gasso had hastily thrown his coat over the 18-pack on the floorboard.

He lied to the trooper about having drank that night but finally admitted it before he was given field sobriety tests. He lied to the trooper about having beer in the vehicle and refused the trooper a search of the pick-up until the trooper said he was going to call the mayor of Gold Hill, Dan Morris. The beer was found. Royal Gasso passed his field sobriety tests overall. The city vehicle was impounded because the City of Gold Hill wisely thought about the liability of the situation if Gasso continued to drive like he’d been.

Royal Gasso’s four citations included speeding, failure to yield, open containers of alcohol in a motor vehicle and running the red light. He paid to bail the city vehicle out of impound the next morning.

A typical Medford Mail Tribune article ran a few days later which hardly had a word of truth in it. Councilor Hobart “Gus” Wolf lied for Royal Gasso, saying he’d only bought a “six-pack”, “rolled through a stop-sign to find a safe place to pull over” and that he changed lanes once without signaling. Gasso also attacked the good people of Gold Hill by saying his “political opponents” were trying to prevent him from using his city vehicle to commute to work. Political opponents? Is he running for mayor now?

I guess Royal Gasso forgot the entire stop was tape recorded, the beer was photographed and a Grants Pass officer also witnessed the event as a back-up officer for the State Trooper.

This reporter obtained a copy of a citation Royal Gasso received on April 10th, 2007 in Lane County. He was driving 85 miles per hour in a 65mph zone on Interstate 5, just south of Eugene. Gasso was in his own car but it was on city business as he was going to a work-related conference.

That’s five traffic tickets in less than a month. No wonder Mr. Gasso didn’t want a driving policy for the city workers…

In an interview with a former Gold Hill sewer plant worker it was reported that Royal Gasso “drank nearly every day on the job, sometimes as much as a six-pack during lunch.” When Gasso was in jail in 2000, for DUII and violating his parole, Councilor Gus Wolf and corrupt councilor Donna Silva made sure he still got paid and had a job when he got out. Gasso had public works employees picking him up at work and taking him home again. Councilors Wolf and Silva made sure those workers got overtime to take their boss to and from home, sticking it to the taxpayers of Gold Hill.

The GSPC Complaint Against
Royal Gasso

Besides Gasso’s alleged personal use of a city vehicle there are other complaints. He reportedly misappropriated funds to pay his criminal friends from public works funds; no time sheet, no W-4 forms, no mailing address or paperwork. No one even knows what they’ve supposedly done. He has overspent the line item in public works to keep his buddy’s pockets lined.

Gasso reportedly gave away about 300 cubic yards, or about $3000-6000 worth of the city’s soil to a contractor friend. The contractor, Creative Land Design, made a lot of money hauling the dirt to a home being built on the Rogue River in the county.

Could This be
The End of
Royal Gasso?

Gold Hill has a city policy. It is against that policy to have alcohol in a city vehicle, open or not. Open containers of alcohol, by policy, can result in immediate termination. It has a policy demanding safe operation of city equipment, not lying to the police, not driving a city vehicle with alcohol in your system, and many more Gasso has broken.

The new, good members of Gold Hill’s City Council are still learning and still developing the courage to deal with Gasso and his partners in crime. It’s a good thing that Gasso is helping them along by “cutting his own throat.”

A fellow sewer mechanic employed by Medford, Mark Warwick, came to Gold Hill’s City Council meeting on May 7th to attack the police and tell the city how wrong they’d be if they got rid of Royal Gasso because he has a lot of certifications. Oh really? I guess if Medford’s city employees are caught driving a city vehicle with open beers, booze in their system, running a red light, weaving through traffic and speeding, it’s o.k. as long as they have enough certifications? I guess Medford’s insurance company is different from Gold Hill’s?

Royal Gasso makes sure all the public works vehicles are worked on at Bob Barry’s auto shop in Gold Hill (Nationwide Auto). Readers will remember Mr. Barry as the convicted drug manufacturer on felony probation who was supported to take a council seat by corrupt councilors Gus Wolf, Jan Fish, and Donna Silva.

Does Gold Hill begin to get the picture?

How much more will the taxpayers of Gold Hill stand?

It’s time to urge the new city council to take action and save Gold Hill from this criminal takeover.

If the new improved city council cannot lead the city then perhaps it’s too late.

Editor’s Note: For more on the Gold Hill debacle please read the article “A GAME PLAN TO DESTROY A CITY” by Gold Hill Chief of Police Dean Muchow.

Also, don’t miss our next edition wherein we’ll discuss lawsuits against the City of Gold Hill.

Corrupt Councilors Found Guilty of Having an Illegal Meeting!