Stacey Gano, heiress to a 3 million dollar estate left to her by her late mother Betty W. Gano, owner of Carpets By Betty in Atlanta, Georgia has reported that she has been a victim of a daylight robbery carried out by her attorney, Shelby Outlaw, and estate attorneys Howard Johnson and Senior Judge Jack McLoughlin.

Betty Gano died unexpectedly on March l8, 2004 in Atlanta Georgia. At the time of her death Betty Gano owned a carpet business known as Carpets By Betty worth 1 million dollars and other assets, including a paid for home worth approximately 1 million. At the time of her passing Brian Cavin, Treasurer of the Georgia Bar Association was the personal attorney for Betty Gano and also the attorney for Carpets By Betty. According to Stacey Gano, “Betty Gano’s brother-in-law Larry Gostovich, under the control and direction of Brian Cavin, served as the initial administrator of the estate for a short period of time, then renounced his position after allegedly looting cash, furs and precious stones worth hundreds of thousands of dollars, from the estate shortly before his death. Jack Radford, a salesman for the Carpets By Betty, then also under the control of Brian Cavin, served for a brief period of time as executor of the estate until he tendered his resignation. 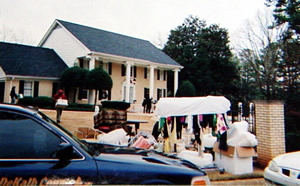 At this juncture I contacted the Law Department of the University of Georgia and was referred to local attorney Shelby Outlaw as an attorney with extensive background in probating estates. Outlaw took the case on the express condition that attorney Howard Johnson be named successor executor of the estate. The handwritten will signed by my Mother, but not admitted to probate because of the collusion and fraud of Cavin, Outlaw and Johnson, provided that I, the only child of Betty Gano, was to receive all her assets other than a minority portion of the carpet business which was to go to Jack Radford, manager of Carpets By Betty, as an inducement to have him stay on to help me run the business.” An allegedly forged will that was submitted to probate, provided that Stacey, currently 37, was to get everything once she reached the age of 50, otherwise the corpus of the estate was to remain in trust until she did reach age 50.

According to Stacey Gano, as soon as Johnson was appointed executor he became hostile and threatening toward her. Instead of insisting on having the handwritten will probated he continued to probate the allegedly forged will. Ron Rice and Curtis Bagget, both nationally recognized forensic handwriting experts had examined the probated will and both submitted affidavits stating the signature on the probated will was not signed by Betty Gano. Howard Johnson, with the assistance of Stacey’s attorney Shelby Outlaw, obtained a court order barring Stacey from involving herself in the business in direct violation of provisions in Betty Gano’s handwritten will which specifically stated that Stacey was to run the business. Johnson then allegedly started liquidating all of the business assets claiming non-existent bills had to be paid. According to Ms. Gano he also looted carpet and other inventory and supplied it to another carpet business that he and others set up in direct competition with Carpets By Betty.

Stacey Gano stated, “Johnson then sold the paid-off million dollar family home for $389,000.00 and had Senior Judge Bethel sign a warrant evicting me and all my possessions on December 14, 2005 from the home we have lived in for over 30 years.” By so doing the attorneys and judge left Stacey homeless during the Christmas holiday. Howard Johnson, Shelby Outlaw and Brian Cavin have made claims and were paid on the orders of probate Judge Rosch. The attorney fees were in excess of $240,000.00 leaving Stacey Gano with less than $200,000.00, one tenth of the estates alleged initial value listed by attorney Bryan Cavan.

Stacey fought back by gaining the assistance of Roger Weidner, 1998 Oregon Reform Party candidate for governor to help her expose how she was being “shamelessly defrauded, by the attorneys and the court system.” Weidner traveled to Atlanta to help Stacey serve a Notice of Termination on the attorneys and Jack Radford and help her prepare for her up-coming court battles. Shelby A. Outlaw resigned as Stacey’s attorney and Ms. Gano was left to represent herself against Howard Johnson.

During one of the court hearings Stacey had Johnson on the stand directly questioning him about his alleged fraud. He sat silent and red-faced not able to deny what she was saying about him. The Atlanta, Georgia law firm of Wilkenson & Wright subsequently came to the aid of Stacey and prepared and filed an Emergency Petition in the Probate Court of DeKalb County describing in detail the facts in the case supported by evidence of all of the executor’s and attorney’s misconduct by which Stacey was finally able to force Johnson out as executor of the estate.

Before Howard Johnson’s discharge hearing, probate Judge Rosch had the attorneys meet in chambers where, even though he was reportedly supplied with conclusive proof of the attorneys fraud, Judge Rosch told Stacey’s attorneys that all the fees the attorneys were requesting would be paid. According to Gano, “after the hearing Judge Rosch told attorney Shelby Outlaw from the bench, see Shelby I told you I would take care of you.”

As if a swarm of locust had descended on the building where her business had operated, everything of value had been stripped out of the building. Only the phones on the floor and some miscellaneous office furniture was left of what had been a prosperous and thriving carpet business for over 35 years. Stacey is now back in control of the business and is working to re-establish the goodwill of the business her mother intended her to have.

Deer Creek Ranch – A Criminal Past