In Memory of Charlie 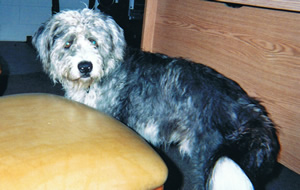 Charlie was a 49 pound sheep dog who belonged to Peter Thompson in Selma, Oregon. At one point Thompson operated a paralegal office in Grants Pass across from WalMart. One day Thompson discovered this hairless, starving dog in the vacant lot next to his office. Charlie was within 24 hours of death due to being malnourished. Although Thompson already had two black labs at the time he felt compelled to take Charlie in and began feeding him and treating him immediately.

Upon seeing him some of Thompson’s clients even began contributing food for Charlie Upon further investigation Thompson, discovered that originally Charlie had belonged to and was mistreated by a local transient. Luckily for Charlie his owner had been jailed for an extended period of time.

As the weeks and months passed Charlie, who was about six months old when Thompson found him, began gaining weight and growing a beautiful albeit scruffy, long coat of hair. He also began making many new friends with both dogs and humans alike. He loved to go riding on the river in Thompson’s drift boat but was otherwise fairly confined because he lived downtown.

Then in September, 2001, Thompson and his dogs moved to the 1000 plus acre Deer Creek Ranch in Selma, Oregon. They could roam anywhere and swim in their choice of two creeks and two ponds. Charlie loved everyone and roamed anywhere including his favorite spots which included neighbor’s houses, the veterinarian’s office, the veterinarian’s house, the Selma gas station and the Selma, Market. Everyone knew where to call when he visited in part because he wore a name tag with Thompson’s phone number on it and in part because they all knew where he belonged anyway. Hence he gained the name of Selma’s dog.

In the beginning of 2006, those who own the Deer Creek Ranch, which you should be familiar with due to prior Observer articles, leased the pasture to the Anderson Dairy out of Coquille, Oregon. Their employee known at this time only as “Shayne” then, for no good reason except revenge against Thompson, reportedly shot and killed the beloved Charlie. Thompson only learned of this because Bill Powell at animal control brought Charlie’s collar to Thompson and told him what happened. Before Thompson could take any action against Shayne he was fired from the ranch for unrelated reasons.

Both the Observer and Thompson would like to locate Shayne. The Observer’s phone number is 541-474-7885. Please contact us if you have any idea regarding the whereabouts of Shayne.