Elections, especially on the local level, are becoming more important each year. Those elected have an enormous impact on the community they serve.
The sheriff in any county has a difficult job that demands a strong, knowledgeable leader. The two who have filed for sheriff in Jackson County, Oregon are the current Sheriff, Mike Winters, and Medford Police Department’s Lt. Tim George. 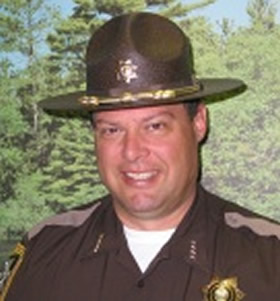 Sheriff Winters was elected in 2002, on the promise to put more patrols on the road with a faster response time in the rural areas. By instituting 12 hour shifts and some key personnel changes Sheriff Winters was able to patrol and increase protection for those located along the 1000 miles of roads that run through Jackson County. Moving the patrol headquarters to the Medford Airport has increased efficiency and decreased costs.
Another problem that had to be rectified was an out-of-control Community Justice Department. Director Robert Grindstaff had been served with a letter of no confidence and charges of corruption by his staff and other county employees. Then it was discovered Mr. Grindstaff had placed serious offenders at the Star Gulch Ranger Station near Ruche, Oregon rather than the low level offenders purported to be there. Sheriff Winters exposed the deception to the citizens of Ruche by stating he worked for the citizens and he refused to be a part of this deceit. Mr. Grindstaff has since retired and Community Justice is now in the capable hands of Mr. Danny Jordan.
One of Sheriff Winter’s many strong points is his commitment to serve the public. He continually seeks input from not only his department but throughout the county. He demands progressive and proactive leadership from himself and those around him.
Needed improvements in the jail and an increase in inmate housing is a work in progress but much has been accomplished. The addition of state-of-the-art computers in patrol cars has given deputies tools that were only dreamed of a few years ago. Sheriff Winters didn’t stop with his department; he has tied other departments to this highly productive technology.
Sheriff Winters implemented a County Child is Missing Alert system which can place up to 1000 calls a minute to homes around the area where a child is missing, which complements the more widespread Amber Alert.
Budget cuts over the years have reduced patrol deputies to a current low of 28 at a time when the number of calls for a deputy have dramatically increased. In the first nine months of 2003, there were 20,497 cases handled by 28 deputies in the 2,801 square miles of Jackson County.
In comparison the Medford Police Department reports that during that same period they responded to 19,983 cases with approximately 100 fulltime officers covering only 22 square miles. 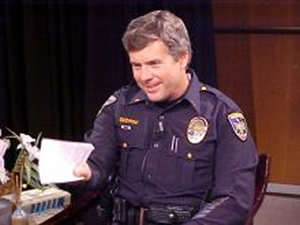 Also running in the sheriff race is Lt. Tim George a 28 year veteran of the Medford, Oregon Police Department (MPD). George, 49, is married and the father of two. He moved from Portland in 1974, to attend Southern Oregon College and then accepted a position with the Medford Police Department. He was in charge of patrols and his current position is supervisor of detectives. Lt. George also hosts a MPD show, Rules of the Road, on the local RVTV Public Television station.
As reporters we can say that Sheriff Winters is very accessible to the public and the press. We have found that it is very difficult to meet with Lt. George. It might be noted that Medford Police Department maintains very tight security and little public interaction with citizens. It appears that Lt. George is in agreement with those policies. If it appears that we are short on information regarding George it could be because of his inaccessiblity. This is definitely a drawback for George.
As for complaints of corruption, an area the US~Observer specializes in and therefore receives far more calls than mainstream presses, we have had no complaints against Sheriff Mike Winters administration during his first term in office. We have had 36 complaints to-date regarding the Medford Police Department, however only two against George personally, one of which was unfounded.
The US~Observer has recently adopted a policy of not endorsing political candidates. However, having dealt with sheriffs across the country we have not witnessed one where a sheriff has been as open to the public as Winters and where a sheriff has actually kept all his election promises. Mike Winters is a first.
One last area of concern for voters regards a sheriff or high level officer actually getting out and working with his deputies, handling cases, etc. In dealing with law enforcement on a daily basis those of us who work at the Observer have witnessed both the need and the positive results when those running any department share personally with law enforcement duties. A close look at Mike Winters record shows that he excels in this category and a close look at Tim George’s history shows clearly that he does not.
The US~Observer has brought you, the voter, the important facts you need to make the all-important decision of who to vote for in the upcoming election for sheriff in Jackson County, Oregon. Make that decision wisely, as these days it is a very expensive decision indeed!
UPDATE – EDITOR’S NOTE: My, my, how things change… In these 5 years since this write-up on Mike Winters he has proven that he turns a blind eye when it comes to the wrongdoings of those beneath him and that he is not the man that was once thought of so highly. Sheriff Winters should reread the Constitution, and act accordingly.

137 Years of Service to Rural America!