“The US~Observer was pivotal in my defense. I was going down if I hadn’t contacted Edward Snook.”

James Roberts was falsely accused of reckless driving and reckless endangerment by two United States Forest Service (USFS) Law Enforcement Officers and one Oregon State Trooper. Roberts was the only person in his vehicle when the incident that led to his arrest occurred. He was arrested, charged and provided a court date.  His account of events would be countered by several law enforcement officers if James took his case to trial. Most people in this position would have folded and accepted a plea deal, believing they had no chance at trial. Not James Roberts. He knew with the right help, the truth would set him free. All Roberts needed was a solid reckless endangerment defense.

Like most, Roberts rushed to retain an attorney who, according to Roberts, “did absolutely nothing.” Roberts lost money and representation when he had to fire his attorney. At this point, James was inquiring for help when a friend informed him of the US~Observer newspaper. He took his friends advice and contacted the US~Observer. Roberts never looked back.

With our help, Roberts took his case to trial. He had a new attorney and the best reckless endangerment defense available. He was able to prove the two USFS law enforcement officers lied. Furthermore, Roberts was able to prove the state trooper was blindly helping the USFS officers and the prosecutor – all in pursuit of convicting Roberts.

His reckless endangerment defense was well put together. The jury deliberated briefly before acquitting Roberts on all counts. Despite being acquitted, for Roberts, the victory was bittersweet. He had maintained his freedom and preserved his spotless criminal record. So, why bittersweet? Not realizing how much he believed police were honest people, Roberts lost his trust of law enforcement in the process. “If a retired guy who did nothing wrong can be targeted – anyone can,” James recounted.

If you or anyone you know are facing unwarranted criminal or civil charges, contact the US~Observer. We can help. 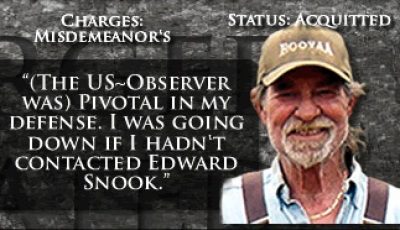