While you, the complacent, uninformed citizen’s, have been sitting on your lazy butts, doing nothing to save our country and our freedoms, the rest of us have been busy studying our constitutions and learning to recognize and identify its enemies, its violators and those that would pervert its meanings, its intent and its ownership.
We the people, that have chosen to fight back and have learned that it is paramount in importance for us to learn the meanings of certain words when fighting the enemies of freedom. Two of the important words to understand are tyranny and malfeasance.
These two words best describe the behavior of many of our elected and appointed officials in government. They are given too much in pay. They have too much power. They have too much immunity and too little accountability to the people they serve. Last but not least, they swore an oath to the people to uphold and defend the U.S. and Oregon Constitutions against all enemies foreign and domestic, and when they violate that oath they have committed an illegal act. 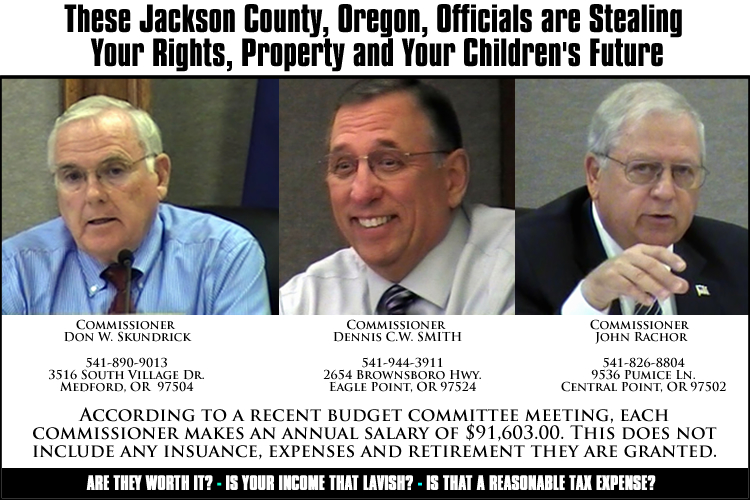 Tyranny: Merriam-Webster Dictionary (A) a government which absolute power is vested in a single ruler (B) the office, authority, and administration of a tyrant.
Malfeasance: Merriam-Webster Dictionary defines Malfeasance as wrongdoing or misconduct especially by a public official. Blacks Law Sixth Edition: Malfeasance is a wrongful act which the actor had no legal right to do, or any wrongful conduct which affects, interrupts, or interferes with performance of official duty, or a act for which there is no authority or warrant of law or which a person ought not to do at all, or the unjust performance of some act, which party performing it has no right to do.
Malfeasance of Office: Due to laws varying from state to state, there are several definitions for ‘malfeasance of office.’ The simple explanation would be, it could be a criminal or civil action that is brought against a public official – elected or appointed – when they abuse the power that was entrusted to them by the people and the people suffer a loss because of that abuse.
Most state constitutions have provisions describing grounds for impeachment when it comes to punishing an official for malfeasance of office. A few states use statutes to lay out grounds for impeachment. Oregon has the only state constitution that has taken the position that public officers shall not be impeached, but may be tried in the same manner as other criminal offenses.
Our Oregon Constitution in the Amended Article Vll Section 6 clearly states that Public Officers shall not be impeached but incompetency, corruption, malfeasance or delinquency in office may be tried in the same manner as criminal offenses, and judgment may be given of dismissal from office, and such further punishment as may be prescribed by law.
Oregon law states, in ORS 8.670: The District Attorney shall institute proceedings before magistrates for the arrest of persons charged with or reasonably suspected of public offenses, when the district attorney has information that any such offense has been committed, and attend upon and advise the grand jury when required.
As an example of malfeasance of office we will use a case and issue that we have reported on and that is the documented proof of Jackson County’s successful and unconstitutional elimination of Jury Trials in civil cases in Jackson County, Oregon.

The issue of malfeasance of office is the misconduct by a public official, dereliction of duty and failing to uphold their oath of office as was the case with our previous Jackson County Commissioners Jack Walker, Dave Gilmore, and Sue Kupillas, when on February 05, 2003, in our opinion, they conspired with their county administrator Sue Slack and county counsel Doug McGerry and Circuit court administrator Jim Adams to steal the constitutional rights of due process in civil cases as guaranteed by the U.S. and Oregon Constitutions from the citizens of Jackson County.
This was accomplished by the attorneys working for different branches of government, perverting the intent and wording of Oregon’s Constitution, Article Vl Section 10 regarding home rule charters to fit their agenda.

Jackson County’s county counsels has been advising county commissioners both past and present that the phrase contained in Article Vl Section 10, “a county charter may provide for the exercise by the county of authority over matters of county concern” allegedly gives authority to Jackson County to deprive its citizens their constitutional rights to due process!
In case (COD2010-00669) Curt Chancler v Jackson County, Commissioners Rachor, Skundrick and Smith are all guilty of malfeasance of office because of their misconduct as public officials, dereliction of duty and failing to uphold their oath of office. These commissioners continually empower county employee Donald Rubenstein, to use quasi-judicial powers that deprive the public of their constitutional rights. Rubenstein, not impeded by any constitutional safeguards, fines and liens the properties of the people who stand before his mock juryless court.
Commissioners Rachor, Skundrick and Smith all swore an oath to uphold and defend the U.S. and Oregon Constitutions. Rachor and Skundrick are reportedly big boys in the business world. Maybe they should have stayed there and not have sworn an oath to something they apparently don’t understand. Dennis Smith has been at the public feed trough for so long, and has held so many public offices that required an oath; he should have known the constitutions by heart!
Commissioners, “I will have it my way” Rachor; “Freeway by-pass” Skundrick; and “What’s in it for me” Dennis Smith showed they were up to their ears in malfeasance when they did nothing to stop the fraud and extortion in the Chancler case, after they were informed that the actions of Mr. Rubenstein were no more than a county commissioner sanctioned Ponzi scheme with a twist.
The twist is, if you refuse to pay their extorted $1190.00 nonrefundable fee for a type ll verification non-conforming status application, they will fine you $600 and place a cease and desist order against you for operating your business. If you continue to operate your business there will be a $10,000.00 a day fine levied against you.
As stated above, our Oregon Constitution clearly lays out how these oath-violating criminals are to be dealt with when they abuse the rights of the people – treat them like the criminals they are! And, also stated above, it is law that the District Attorney of the county SHALL institute proceedings against those suspected of such public offenses!
Well, District Attorney Mark Huddleston, you are in luck, because we have located a truck-load of Jackson County’s oath-violating, committers of malfeasance of office and they are in elected and appointed offices near you. To make it even easier for you, you will be receiving a registered letter with the names and offices of these violators before this article is published and we want to work with you to put these unconstitutional criminals under the wheels of justice. The people of Jackson County want these oath violators prosecuted and put out of office. Oh, and I hate to bring this up, but all of this happened on your watch and I thought you might want the opportunity to clean this up before you retire. 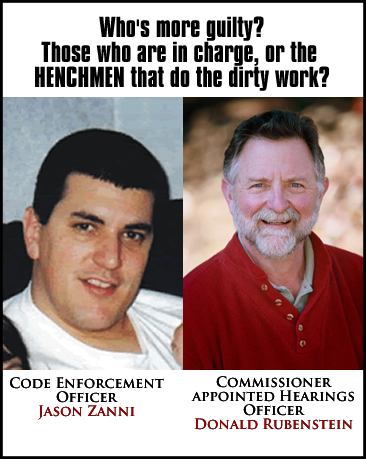 For the record, when times were better, the people of Jackson County were content to let the government screw their neighbors out of their rights, money, property and even their children and their freedom, but no longer.
People’s priorities change when you don’t have a job to go to everyday; your unemployment runs out; your house is in foreclosure; you are getting tired of hamburger helper seven nights a week; and an unmarked wrecker circles your neighborhood, making you afraid to take the car out of the garage. People get down-right testy if you try to take anything away from them, or their neighbors, and they get pretty upset about the officials who continue to “have.”
All anyone has to do is walk to any government office – federal, state, county or city – and the people that work there are getting a regular paycheck; their house is probably not in foreclosure; their daily diet is not an issue; and no one is looking for their car. Do you remember the insurance you and your family had when you were working? Well, the government officials still have premium insurance covering themselves and their families, and it is better than anything you could ever provide for your family – even when you were working in the private sector. And don’t you citizens ever forget the lavish retirements that you provide for your public officials!
To be fair, many of the people working in our buildings are just like you. They’re just trying to raise their kids and live the American dream. But there are others, the ones that make 6 to 8 times the salary you ever have, with a benefit package that you can’t even imagine. These people can give themselves a pay raise anytime they want. They can even borrow the tax-payers money to buy new homes, and they are allowed to make their own employment contracts. Take the time people, to check out Jackson County Administrator Danny Jordan’s contract! Jackson County citizens, your hair will stand straight on end…
I understand that his contract is so tight that if he were fired, we the people would have to pay him for four years after he left the job. We would even have to pay for his insurance and car expenses for that time! Remember folks, this is a six figure a year salary, and he’s not the only “public servant” to have this kind of an employment package!
The most troubling part of this is these people swore an oath to protect and defend a document that ensures that we remain a free people, forever, and they have lied and perverted its meanings to give them an unconstitutional power to steal our rights. From your property rights, to your right to be in charge of your own family, many of our “public employees” trample our rights for their own benefit.
We just need to remember, our founding fathers gave us every tool we need to protect and maintain our constitutions and the rights and personal freedoms they guarantee. The only thing we as a people need to contribute is a little integrity, guts and resolve. It’s sad that up to this point many of us haven’t possessed any of these attributes, but it’s not too late.
Citizens from both Jackson and Josephine County have been meeting in Rogue River, Oregon every other Tuesday at 6:30 PM at the Live Oak Grange 120 Gardiner Street and they are learning to fight back. Wake up America’s next meeting will be on May-15-2012. Get your friends and neighbors off their lazy butts and come see us! Be responsible, and that responsibility might just pay off…
The US~Observer made a promise to Commissioner John Rachor months ago. Since he personally stated that he would do something about Mr. Chancler’s injustice and failed miserably – the US~Observer is going to uphold our promise and make sure that Mr. Rachor’s job as a Jackson County Commissioner is short-lived. We will be using every resource possible to investigate John Rachor and the rest of of the corrupted employees involved in Mr. Chancler’s case. The US~Observer has a track record which it intends to keep, and a promise made to Mr. Rachor that won’t be broken.
Listen to Curt Chancler’s interview on Bill Myers talk radio show. Click here

Shining a light on Dysfunction