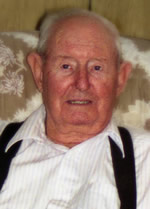 William Alfred Lee, born in 1914 in Fallon, Nevada, died March 10, 2006 almost reaching the age of 92. He had been married to Josephine Blanchard Lee for 68 years. During Churchill County’s Millennium Moments Celebration, Bill received the Fallon Pioneer Award as the Continuous Oldest County Resident. Jo remains on the family farm where they lived for 62 years, since 1944.
Bill leaves behind five sons, 11 grandchildren and 15 great grandchildren. Sons Delvan, Rich and Snick Lee live in Fallon, NV, Bob Lee in Troy, MT, and Ron Lee in Reno, NV.
Bill’s life spanned an interesting period in history. He saw the evolution of the automobile and the airplane. At 14 he was pitching hay behind a team of horses and doing ranch work. At 38 he bought his first tractor, a 1952 Case model VAC.
Growing up in the 20’s was difficult and education was a challenge living way out of town near the small community of Fallon. He had to wait to start high school until he was 16 and old enough to drive the school bus, because he needed a job and a way to get to school. A highlight of his school years was attending the National Future Farmers of America (FFA) Convention in Kansas City as a Star State Farmer where he was given the American Farmer award. It was the first time he saw a skyscraper. He said he could have gotten the roof of his mouth sunburned because he went around looking up with his mouth open. He was 21 when he graduated.
As a high school graduate and hard worker raising a family, Bill held several jobs over the years besides working his own farm – cattle, milk cows, pigs, and garden. From age 21-25, Bill hauled freight and ore from Rawhide to Gabbs and to the now “ghost towns” of Fairview and Wonder. Later he became Foreman for the Fallon Flour Mill and at the same time was a Churchill County Game Warden. Doing roadwork for Dodge Construction on Hwy 50, he injured his knee requiring surgery in December of 1956. Without income, his teenage sons trapped and sold muskrats while he was laid up. They made more money than their Dad would have while working. In 1961 he found a home working for Builder’s Supply Company and retired from there 27 years later.
There was no time before retirement for long vacations, but Bill loved the outdoors and hunting (deer, upland game, and fish – which provided food for the family), as do his sons, and he looked forward to every hunting season. The yearly family outings were spent every 4th of July fishing at Reese River and deer hunting in the Fall. At 76 Bill went to Colorado and got his first Bull Elk. Two years later, he downed a second – both 5×5.
“Anytime hunting with our Dad was a fun time,” said Rich. “He worked hard at making it a good experience for us.”
Bill and Jo especially enjoyed Blanchard Family Reunions and trips to watch grandchildren participate in several National High School Rodeo Finals. They also took memorable trips to Alaska and Branson, MO.
Over the years Bill had been a Charter Member of the Greenhead Hunting Club, member of Oddfellows and Elks, and Life Member of the North American Hunting Club. He was a Churchill County Commissioner for 8 years. According to son Ron, “Dad was an upfront and very honest man. Any hot issues Dad stood for or against as a commissioner, he did what he thought was right or needed by the county as a whole.”
Bill Lee was a hard working American who loved his family and the tradition of hunting. He will be missed