Illinois Valley, OR – On March 8, 2005 in the Josephine County building in Cave Junction, Oregon, candidates for county sheriff met with local residents to state their qualifications and answer questions from the audience. The event sponsored by the Illinois Valley Chamber of Commerce drew a significant crowd who listened intently to each candidate. Those running are Brian Anderson, of Merlin; Donald L. Fasching, of Selma; Gil Gilbertson, of Grants Pass; and William “Spike” Kelly, of Williams. 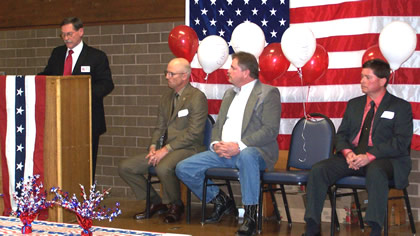 Of the four men who addressed the public, “Spike” Kelly and Gil Gilbertson won the most applause and the general consensus was that they seemed to be the one’s to watch. Several Illinois Valley residents commented that Gilbertson seemed to be the most qualified, but that Kelly won the crowd with his natural demeanor. According to these residents both Fasching and Anderson seemed to lag in appeal as their choice for sheriff.
One attendee offered his commentary and stated, “Spike came across as a ‘good friend’ and Gilbertson as the most experienced and even though Don (Fasching) had a great presence, he admitted that he didn’t know anything about running a jail. I think that hurt him. And what was the deal with (Brian) Anderson? He looked like his head was going to explode, was stoic, and came across like he didn’t want to be here … he kept looking at his watch.”
The four men were asked a myriad of questions by the audience ranging from how they would combat the poor morale of the deputies to their feelings on a public review board and how they would handle the growing transient population in the local park.
All of the candidates and their positions were fairly consistent with one another with few exceptions. Being one of the main issues of the evening, however, was opinion on a public review board and the members varied in their responses. Both Fasching and Anderson were not in favor of public review boards while Kelly and Gilbertson were, in varied forms.
The primary to be held May 18th will determine if one candidate is the overall winner and next sheriff, or if there is not a majority vote for one particular candidate, the top two will run off in the general election held this November.
Editor’s Note: Next edition; the candidates.

The Anatomy of a Bad Politician