Medford, OR – On the afternoon of July 25, 2012 David West was returning home from work when he saw a familiar Radar Enforcement Van operated by the City of Medford, Oregon. This van had been parked in his neighborhood before and it posed concern for West. 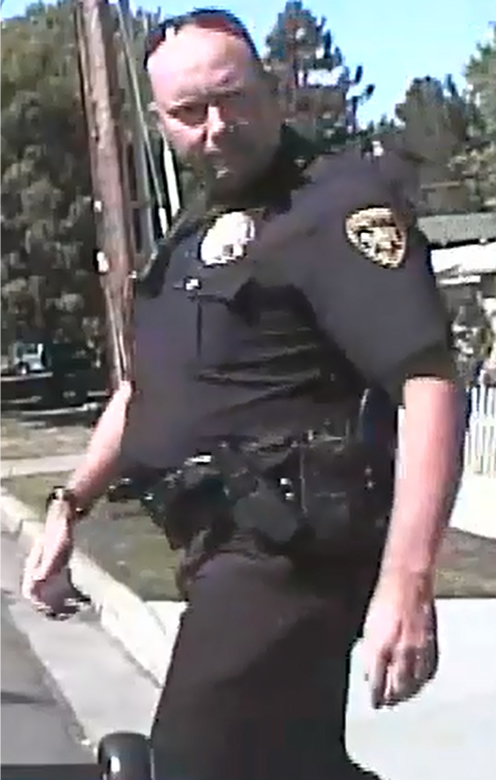 West, 22 years of age is an aspiring filmmaker and is described as an astute man who is knowledgeable and active in politics and civil/human rights. West decided to protest the van that afternoon while recording himself. Within 10 minutes of protesting the van, West was ordered at gunpoint by Officer Erik Baines of Medford Police Department (MPD) to the ground, put in “double locked” handcuffs and arrested for disorderly conduct.

According to Officer Baines’ police report, West decided to protest that day because, “He sees that van out on Garfield (street) two or three times a week and feels the police should be out looking for criminals, not code violators.” West had made a sign to protest the radar van, set up his video camera across the street, and was peacefully protesting when the van operator – Michael Blair, a retired Detective with MPD made contact with him, which was confirmed by video obtained.

As described by Blair’s statement to Officer Baines, Blair asked, “If West had gotten a ticket from the van and West said he had not.” Blair also asked, “If the sign was for him and West said it was.” Blair then asked West if he would like a drink of water and West politely declined. Although the audio portion was not clear on video, you could see the conversation was brief, and David was clearly not creating a disturbance as reported by Blair on dispatch audio recordings. West stated that before Blair ended the conversation, he called West a “Whiny Boy” and said, “Have a good day Whiny Boy”, to which West replied, “You have a good day too, fat ass.”

A few minutes later, West headed to the rear of the van and stated, “He made sure there were no vehicles approaching”, and is seen on video running across the street. This is important because according to Blair’s report of the incident and arresting Officer Baines police report West was “Lodged after blocking traffic…” but West never blocked traffic.

Nearly six months after West was arrested, on January 9, 2013, Officer Baines testified that Blair had told him West blocked two vehicles on Garfield Street for 10-20 seconds – this was clearly a lie and disproved by video footage of the entire incident. If responding officers would have reviewed the video, which West requested at the time of his arrest, they would have easily seen that Blair was lying, but they either didn’t review the video, or clearly disregarded the evidence on the video.

According to Officer Baines’ report, one of two witnesses stated, “She did not see him in the street interfering with traffic.” The other witness also made no claim that West obstructed or blocked traffic.

Multiple Officers who responded on scene testified at West’s hearing on January 9, 2013. MPD Detective Justin Ivens stated he has been an MPD officer for “seventeen years” and testified to hearing “Stress” in Blair’s voice while listening to Blair’s call to dispatch. Lieutenant Whipple testified that he heard “Stress” in Blair’s voice. Arresting Officer Erik Baines testified to hearing “heightened anxiety” in Blair’s voice. All officers who testified admitted to discussing the case prior to testimony and Officer Baines testified to talking to Medford’s Senior Assistant City Attorney, Kevin McConnell, about Blair’s tone of voice prior to the hearing. After listening to the call made to dispatch by Blair, I was puzzled that the officers would all say the same thing about Blair’s “Stress”, which was not even close to apparent while listening to his recorded conversation with dispatch. Blair even stated during his call, “Just be advised so far he hasn’t menaced me…”

Detective Justin Ivens on a recording obtained from the date of West’s arrest stated to West, “I just don’t want, more than anything, we can’t have this. I understand your frustration. This isn’t the way to go about demonstrating it.” There is no law against protesting because it is protected by the First Amendment to the United States Constitution, which is the supreme law in the United States, so why was Ivens compelled to make that statement to West?

Officer Ivens also stated to West, “Believe it or not, the number one complaint in the City of Medford is speeding vehicles from citizens.” This is another example of how an officer can create a fabrication to validate his abusive actions. According the city of Medford’s own website, reported offences for the entire year of 2012 were recently published and speeding vehicles was not even in the top 10 on the list.

Arresting Officer Baines stated to West, “You seem like you got some, a brain between your ears and it’s just kind of a poor decision.” What was Officer Baines referring to? What law had David West violated?

While transporting West to jail, Baines stated, “So here is the deal, you’re being charged with disorderly conduct. I’m gonna have the jail hold you overnight and you should be arraigned by the municipal court judge tomorrow morning.”

David West is astute because he stands up for his rights, and more importantly, he exercises his rights. Whether protesting a radar van is your cup of tea or not, that is not reason enough to arrest someone. What happened is simply wrong, unlawful, and a clear and present danger to all citizens in Medford, Oregon. If the police can conspire and create evidence against David West, what are their actions on a daily basis? I am an advocate for transparency and honesty, especially in government and this is not good for the rest of MPD, especially the officers who do their job the right way, every day.

The real reason why David West was arrested 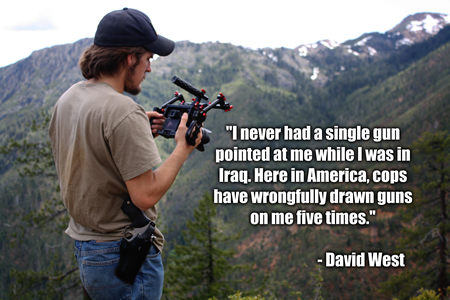 David West often open carries a firearm; a handgun which is kept secure in a holster on his belt at all times. He has taken firearm safety courses and has valid Concealed Carry Permits from the states of Oregon and Utah. West had a .357 magnum revolver carried openly on his person that day while in public, which is legal in almost every city in Oregon, even without a concealed carry permit. West’s sign read: “Tax Whore Pig”, to describe his view of revenue generating practices for the city. While carrying a firearm and holding a sign like that is clearly not something often seen in public, that doesn’t make it illegal. So, after responding to the scene and forcing West to the ground at gunpoint, placing him in handcuffs, stuffing him into the back of a patrol car and reading him his Miranda rights, what options did MPD have after finding out that West never threatened anyone or un-holstered his pistol, and has a CCW permit and no criminal history whatsoever?

The only logical explanations are that the responding officers either attempted to lie, or Blair lied to the responding officers. Either way, the responding officers had West’s permission to view his video, which was barely over eleven minutes long and learn the truth and then they could have released him. They did not do that. Instead, they went along with Blair, and probably even conspired with him to make the arrest? They also obviously conspired prior to court when they all testified about the “stress” in Blair’s voice, which wasn’t even mentioned in the police report.

A copy of the exculpatory video that West had taken was secured by the defense when its release was negotiated by West’s attorney Nathan Wente several weeks after his release from jail. Apparently no one at MPD or the city prosecutor’s office observed the video, despite having both West’s camera and memory card in their evidence locker for nearly 6 months.

After West had his pre-trial hearing and the officers had testified, Nathan Wente, West’s attorney, shared the video with the prosecutor, McConnell. McConnell filed a “Motion to Dismiss” on January 11, 2013 and Mr. West’s charges were formally dismissed less than one week later by Municipal Judge William P. Haberlach.

If this writer’s bias or opinion is too strong in this article, please let the decision from the city prosecutor to dismiss the charges before trial be evidence enough that what has been reported is absolute fact. If you reside in Southern Oregon and are facing criminal charges, I would highly recommend Nathan Wente. He decided to withhold the video until after the officers testified. Smart move Mr. Wente.

Please note that although Michael Blair is not a “Police Officer” at MPD, he is a retired police officer, he operates a vehicle that takes photos of speeding cars (which results in citations), his paycheck is from the City of Medford, and he is a government employee. Had he not lied to dispatch that day, it is likely that West would have never been arrested.

Had West not decided to video his peaceful protest on July 25, 2012, one must assume he would have been convicted – another loon with a gun, another notch on the conviction belt for the prosecutor, and, most certainly, another lie resulting in arrest and conviction for MPD.

Editor’s Note: The facts in this article are extremely alarming given the long track record of lies, deceptions and attempted false prosecutions resulting from the actions by the Medford Police Department.

For the past 12 years the US~Observer has provided the public with irrefutable proof that numerous MPD officers have involved themselves in committing actual crimes against innocent citizens. All MPD officers need to be aware that these bad officers make them look bad.

The US~Observer is giving public notice to Medford Municipal Court Judge William P. Haberlach (the judge that presided over David West’s preliminary hearing) that if he fails to take substantial actions against the officers who lied and conspired against David West that he is just as guilty of lying and conspiring as the officers. We also give notice to Medford Chief of Police Tim George that he is responsible for the actions of his officers – If George fails to stop this severe abuse, he is just as guilty as the officers who lie and conspire resulting in false charges against citizens of Medford, Oregon.

Can we expect any of these individuals to demand accountability as opposed to covering up corruption? Unfortunately, no we cannot… 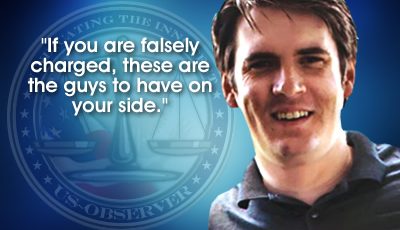